That was the exact moment when we learned that Republican Sen. Cory Gardner had lost his bid for re-election to Democrat John Hickenlooper. Gardner was so far out of contention in 2020 that the race for U.S. Senate was called literally one minute after the polls closed in Colorado.

It was an ignominious ending for Gardner, who just barely avoided a double-digit loss (53.5% to 44%). This was a startling change of direction from 2014, when Gardner narrowly defeated incumbent Sen. Mark Udall and was widely pegged as a rising star in the Republican party.

After the 2018 mid-term elections, Colorado was primed as the most competitive Senate battleground race in the country. We never got that far. Gardner’s poll numbers were consistently in the toilet, right next to his credibility, and despite tens of millions of dollars spent on his behalf, Gardner was never even really a threat to win re-election in 2020. This bears repeating: Gardner was SO bad at being a Senator and a candidate for re-election that his eventual defeat was a foregone conclusion for months beforehand.

Just before the November 2020 election, we took a long and detailed look at how things went so horribly wrong for Gardner in the years following his 2014 upset victory. We’re not going to repeat that analysis here, but the short version is this: Gardner lost his re-election because he made awful decisions nearly every step of the way.

In the end, it was fitting that Gardner’s Senate career would close with little more than a shrug from local and national observers. Cory Gardner didn’t go down swinging…he just sorta went away. 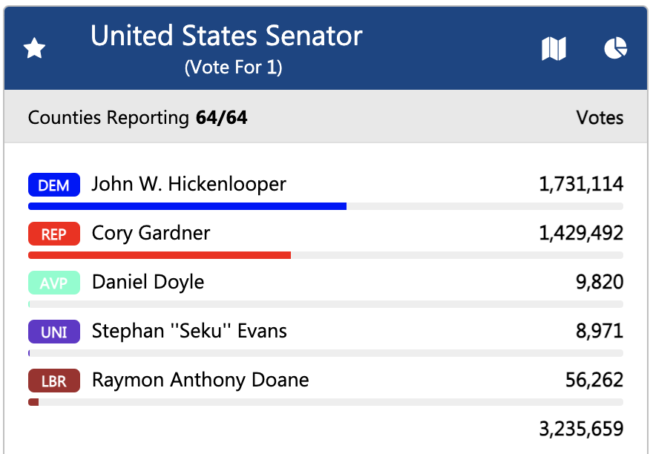 The word you’re looking for is “anticlimactic.”