As far as anyone can tell, Senator. Cory Gardner (R-Yuma) is indeed running for re-election in 2020. In Colorado.

Gardner’s campaign strategy is just starting to get rolling — we’ve seen hints of it in his rare public comments — and it looks like the narrative is going to be fairly simple:

That’s pretty much all you get from Gardner, as you can see from this Tweet today:

On this Super Tuesday, exercise your right to vote for the America we all know and believe in. Stand up for freedom. Fight back against socialism. #BelieveInAmerica #BelieveInColorado pic.twitter.com/BmPQMmBw5C

If this seems like an oversimplification of a much more complex argument…well, that’s because it is. Gardner’s only real path to victory in November is to scare voters about socialism while he marches around the state blasting “God Bless America” from his truck speakers. There are student council candidates with more substantive platforms. 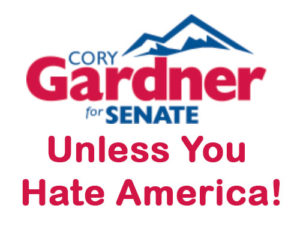 In Gardner’s defense, he doesn’t have many other options here. He can’t really pretend to care about health care anymore. He can crow about moving 27 whole people to a new Bureau of Land Management headquarters in Grand Junction, but that’s more of a bullet point than a message.

Gardner is so thoroughly attached to President Trump that nobody would believe him if he claimed to be bipartisan. He’ll definitely talk about the Arkansas Valley Conduit project, but that only takes up about 15 seconds. Gardner certainly won’t mention that The Denver Post famously un-endorsed him…and you can’t put “Coloradans deserves better than Cory Gardner” on a yard sign.

This is Gardner’s 2020 playbook. He’ll scream about socialism and pray for a Sanders nomination, and he’ll hope like hell that nobody notices that he’s never in Colorado. If the top of the Democratic ticket in November is, say, Biden and Hickenlooper, then “Plan B” is to drone on forever about how much he “believes” in Colorado and “believes” in America.