A Coward and a Liar: Poor Reviews for Gardner on Impeachment

Colorado Sen. Cory Gardner (R-Yuma) did what everyone expected him to do yesterday when the Senate voted on two articles of impeachment against President Trump: He covered up for Trump and voted to acquit the President.

What Gardner did not do, however, was find a way to explain his rationale for acquittal in any sort of manner that would make it appear as though he was not just participating in a cover-up. Gardner’s asinine speech on the floor of the Senate was notable mostly for his misinterpretation of Alexander Hamilton. Gardner’s media interviews on impeachment were, frankly, insulting to Coloradans.

In response to a question from Joe St. George of Fox 31 News about whether the Senate vote set a new precedent for election interference, Gardner had the temerity to exclaim that “foreign interference in our elections is absolutely wrong.” 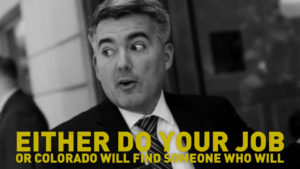 In an interview with Colorado Public Radio, Gardner argued that the impeachment of Trump was really just a policy kerfuffle. “This is a policy question,” he said. “Does the United States have the ability to investigate how its taxpayer dollars are being spent?”

Gardner’s bullshit was swiftly condemned by lawmakers and media outlets alike. Here’s Rep. Jason Crow (D-Aurora), who served as one of the House impeachment managers in the Senate trial, speaking to Colorado Public Radio in response to Gardner’s “policy disagreement” explanation:

“The trial showed unequivocally that that’s just not true. Cory Gardner is not telling the truth there.’’

Crow said further that he believed Gardner was “doing what he feels is politically in his own best interest instead of doing what is right and upholding his oath,” and it’s impossible to argue otherwise. Kyle Clark of 9News had this to say on Wednesday evening:

Hundreds of Democrats and Republicans in Congress faced that central question of whether President Trump did something wrong, and they showed the basic courage to directly answer that question for voters…

…But the whole impeachment trial has now come and gone without Senator Cory Gardner ever coming up with the basic courage to directly answer that question. [Pols emphasis]

My final thought on the impeachment of President Trump. #copolitics #9NEWS pic.twitter.com/hdvUxQy3ne

But the unkindest cut was reserved for the editorial board of The Denver Post, which absolutely lit into Colorado’s Junior Senator on Thursday:

Sen. Cory Gardner either thinks it’s OK for a president to pressure a foreign government to investigate a U.S. citizen for personal and political gain or he’s too afraid to criticize this president for doing just that.

We’re not sure which is worse.

Gardner failed to address the issue on the floor of Congress while he was explaining to the public his decision to acquit the president on that very question. In subsequent media interviews where he was asked the question directly, he did the trademark Gardner dodge and weave.

That was just the beginning. Here’s the knockout blow:

Gardner once said he would stand up to his own party. Turns out he won’t even be critical of the actions of a member of his own party. He must believe what Trump did was fine. Why won’t he just say that?

Ooof. Make sure to take a moment to read the entire Post editorial.

There’s a good reason that even staunch Republicans are sick of Gardner’s crap. He might have helped save Trump’s skin on Wednesday…but nobody will be bailing Gardner out in November.