The idea that we would turn our back and close our eyes to evidence pounding on the outside of the doors of this Capitol is pitiful. It is disgraceful. And it will be a stain on this body for all time. #ImpeachmentTrial

JOE ST. GEORGE: I’m curious about precedent here. Do you believe that this will now allow future Presidents to do this? Will this allow you to ask a foreign leader to investigate John Hickenlooper?

(9) When you were speaking on the Senate floor, were you not aware that Sen. Mitt Romney had already announced that he would vote YES on abuse of power?

UPDATE #2 (1:20 pm): Gardner’s media tour is NOT going well. From Nick Riccardi of the Associated Press:

UPDATE (1:00 pm): Gardner finally speaks on the Senate floor, but his timing is off. Gardner railed on impeachment as a partisan exercise — even though Republican Sen. Mitt Romney had already announced that he would vote YES on the charge of abuse of power against President Trump.

Gardner also complains that the House of Representatives rushed the impeachment process, which doesn’t square at all with the fact that he voted against calling new witnesses — and thus extending the trial — just a few days ago. 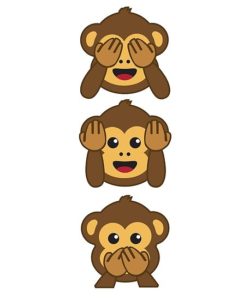 The final gasp of the Senate impeachment “trial” is underway today, concluding with an actual vote that will almost certainly result in the acquittal of President Trump despite overwhelming evidence that he both abused the power of his office and obstructed Congress when it tried to investigate his actions. This, sadly, was the conclusion most observers had long anticipated after the House of Represenatives impeached Trump in December: Senate Republican sycophants blindly marching in lockstep with the President.

Senate Republicans are employing a long list of excuses for exonerating Trump. Republican Senators such as Lamar Alexander of Tennessee and Lisa Murkowski of Alaska have candidly admitted that Trump acted “inappropriately,” though neither is expected to actually vote YES on impeachment. Republican Senators Susan Collins (Maine) and Rob Portman (Ohio) also take the approach that Trump’s actions were “inappropriate” but not impeachable. As Chris Cillizza writes for CNN, the explanation given by Sen. Collins is particularly ridiculous; in an interview on Tuesday, she said this with a straight face: “I believe that the President has learned from this case” and that Trump “will be much more cautious in the future.”

Senate Majority Whip John Thune (South Dakota) joins the likes of Louisiana Sen. Bill Cassidy and Texas Sen. Ted Cruz in blaming the House of Representatives for not sufficiently proving the case against Trump. Many others, including Sen. Rand Paul (Kentucky) and Joni Ernst (Iowa) are basically accusing the House of Representatives of presenting a phony case for impeachment altogether.

As of Wednesday morning, more than 50 Senators had taken to the Senate floor to speak on impeachment. Colorado Sen. Cory Gardner (R-Yuma) still hasn’t said a word; he’s earning every bit of his #CoverUpCory moniker.

Gardner says that he is eventually going to talk to Colorado-based reporters about his thoughts on Trump’s misdeeds and the impeachment trial. The odds of Gardner giving a serious interview to a serious reporter are pretty low, but if it does happen to take place, here are some obvious questions that Gardner has yet to address:

(1) Do you agree with Sen. Lamar Alexander’s belief that House impeachment managers proved their case against President Trump?

(2) Do you believe that Trump withheld aid to Ukraine in order to coerce their government to initiate an investigation of a domestic political opponent? If not, does that mean you reject the testimony of Ambassadors Yovanovich, Sondland, and Volker? What about the contents of the messages and emails released as evidence?

(3) Do you believe that President Trump acted appropriately in asking a foreign country to intervene in American elections? (You’ll remember that this line of questioning didn’t go well for Gardner back in October; he still hasn’t answered this basic question.)

(4) Would you accept interference from foreign governments if it benefitted your own re-election campaign?

(5) Do you think that former Colorado Sen. Wayne Allard — for whom you once worked as a Senate aide — was right when he voted to remove President Clinton from office? If so, what was the difference between what Clinton did and what Trump did?

(6) You voted against hearing testimony from new witnesses, including former National Security Adviser John Bolton. Do you believe Bolton’s testimony is not relevant or that he is not a reliable witness?

(7) How do you respond to criticism that you are just covering up for President Trump in voting for acquittal?

(8) Do you believe that former Vice President Joe Biden acted inappropriately in his dealings with Ukraine? Is that opinion informed by any of the committee hearings you were involved with from 2014-2016? 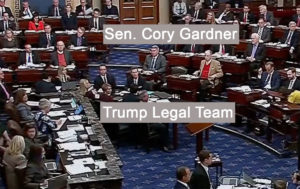 These are all very simple questions. Coloradans deserve straightforward answers. Instead, Gardner’s constituents will likely be left with a canned statement that reads something like this:

We had a trial in the Senate. I had a good seat. I took my oath of impartiality very seriously. The House presented evidence and witnesses. It is a somber moment to cast a vote on the impeachment of a duly elected President of the United States. President Trump has the right to the presumption of innocence. The Senate had a grave constitutional duty and did its job accordingly.

The U.S. Senate is scheduled to hold a final vote on the impeachment of President Donald Trump sometime after 2:00 pm Mountain Time.