Beginning Of The End? Gardner Implodes on Ukraine Questions

On Thursday, two Republican senators — Joni Ernst of Iowa and Cory Gardner of Colorado — repeatedly refused to answer reporters’ questions on whether a president should make such a request of a rival power. “I don’t know that we have that information in front of us,” Ernst said in Iowa, even though the president made the request in front of cameras on the White House lawn.

In Denver, Gardner likewise wouldn’t answer reporters’ variations on the question 12 separate times before an appearance with the Colorado Chamber of Commerce. Like Ernst, he tried to punt to the Senate Intelligence Committee, which is investigating the circumstances around Trump’s private call with Ukraine. “It’s an answer that you get from a very serious investigation,” Gardner told reporters when asked about the appropriateness of the president’s public comments…

Ernst and Gardner seemed to follow a pattern set by fellow Republican Arizona Sen. Martha McSally — also a top Democratic target next year. On Monday, McSally also wouldn’t answer whether the president can ask for overseas help, instead referring to the Senate Intelligence Committee probe and taking swipes at House Democrats.

President Trump just liked this tweet about @SenCoryGardner repeatedly refusing to say if it was acceptable for the President to ask foreign governments to investigate his rival. #copolitics #9NEWS pic.twitter.com/jw5xMIFZmC

It would appear that Sen. Gardner is now well and truly playing to an audience of one.

U.S. Sen. Cory Gardner on Thursday repeatedly refused to say whether he thinks it’s appropriate for the president to ask a foreign government to investigate a political rival.

In two sometimes-tense scrums with groups of reporters before and after an event with the Colorado Chamber of Commerce, the normally upbeat Colorado Republican rejected questions, accused a reporter of being biased and then jostled his way out of a downtown Denver hotel. It was an uncharacteristic display of frustration. [Pols emphasis]

“This is a partisan exercise that ought to be about the seriousness of the moment,” he added. “I see that you guys are going to continue to drill this. I’ve given you my answer.”

Gardner met with reporters for more than five minutes at the Westin Denver Downtown, at times sounding exasperated by the repeated questions about impeachment. [Pols emphasis] He said more than once that it would be inappropriate for him to weigh in on impeachment before a full investigation has been conducted, even as he criticized the House’s impeachment inquiry.

Mark it down, folks. Today Cory Gardner’s political destiny took a big turn for the worse. 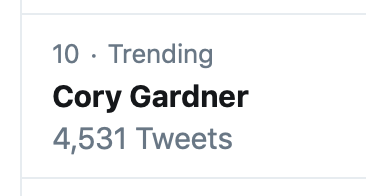 It’s wrong for the President to ask a foreign leader to investigate a political rival. And it’s wrong that Cory Gardner refuses to stand up and say so. #COSen #COPolitics https://t.co/bcUwrIBSbS 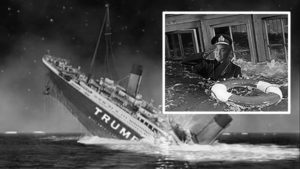 Senator Cory Gardner is going down with the ship.

It was only a matter of time before Sen. Cory Gardner was cornered by a reporter and forced to discuss a subject he’s been doing his level best to avoid–the fast-moving impeachment inquiry against President Donald Trump over his manipulation of foreign aid to Ukraine in order to pressure that nation to investigate the son of Democratic presidential candidate Joe Biden.

Gardner’s longstanding lip service to defending Ukraine against Russian aggression has made Gardner’s silence on the issue problematic to say the least–but if you’re hoping Gardner was finally ready directly to address the situation, KRDO-TV’s report from yesterday evening after Gardner spoke to them in Colorado Springs will disappoint:

Speaking of the President, we also asked Gardner for his thoughts on the impeachment inquiry. He said the probe feels one-sided, “I’m very concerned this has turned into a partisan circus right now.”

He says some Democrats have even admitted they need to impeach Trump now or face losing the 2020 election. “That is taking this into politics and using a constitutional weapon and that type of political circus doesn’t benefit anybody,” Gardner says.

And…that’s it. No acknowledgement of the seriousness of the allegations against President Donald Trump, or the condemnation of Trump from a growing number of fellow Republicans, or how Trump’s actions affect Gardner’s own stated foreign policy priorities. Nothing but evasion and finger-pointing. This morning at a Colorado Chamber of Commerce event in Denver, Gardner tried the same approach–but instead of getting away with it, Gardner was punished with two minutes of video that every Colorado voter needs to see:

The transcript is almost as brutal as watching the video:

JOE ST. GEORGE: Senator as you know impeachment is on the minds of a lot of people. You’ve called it a partisan circus, but I haven’t heard you answer this question. Do you believe it’s appropriate for the President of the United States to ask a foreign leader to investigate a political rival? Yes or no?

CORY GARDNER: Well look, this is what we’re gonna get into, the Senate Intelligence Committee is having an investigation, a bipartisan investigation. Unfortunately that what we’ve seen is a very political process take over. If you look at Al Green a Texas member of Congress has said, ‘We need to impeach President Trump now because there might not be able to beat him in November. That’s about politics. That’s not what this serious investigation should be about.

ST GEORGE: No you didn’t.

ANUSHA ROY: Is that a yes or yes or no?

GARDNER: Well here’s what we see in the House of Representatives. You see a very partisan process is taking place. Why is it that when you all do stories or we see reports in the news about four states, Colorado, Arizona, Maine, and North Carolina? Seems to be about politics and elections other than the serious process that it is.

ROY: But the question is, is it appropriate for a President to be…

GARDNER (interrupts): Look I think we are going to have an investigation…

ROY: To ask a foreign government…

GARDNER: And it’s a nonpartisan investigation…

ST. GEORGE: But would you be okay if it was a Democrat asking a foreign government for help in the election?

GARDNER: Look, here’s what we’re doing. What we saw in the media was a jump to a very partisan very partisan…serious abuse of a tool in the Constitution. And this is about an investigation is taking place in the Senate Intelligence Committee. That’s where it should be. What we’ve seen from the House of Representatives and Nancy Pelosi is very partisan partisanized effort. Why, what other reason do you have to cover four states every time you do a story on this? It’s about Colorado, it’s about California, it’s about North Carolina and Arizona. That’s what you’re saying over and over again in all these stories. So this is a serious time, a very serious investigation. Let’s have that investigation.

ST. GEORGE: Is it okay for you to ask a foreign rival to investi–

GARDNER: Look you know what I’ve said about that–

ST. GEORGE: But you’re not even answering, we want to hear form you you’re a smart guy, you know the debate…

GARDNER: This is about the politics of the moment and that’s why they’re trying to do this. Now, look…

In less than two minutes, Sen. Cory Gardner was asked seven times if he thinks it’s appropriate for the President–or for that matter, anyone including Sen. Gardner–to ask a foreign government for help against a domestic political rival. Seven chances to, if not condemn Trump, at least make clear where he stands on the crimes Trump is accused of. Gardner repeated failure to acknowledge the facts of the situation and instead focus dogmatically on the “partisan partisanized”  investigation, especially with other vulnerable Republicans breaking ranks and daring to criticize the President, is incredibly painful to watch.

We believe that at some level, Gardner knows his evasive defenses of Trump are political suicide in a state trending bluer in every election. But he apparently has decided that he can’t change course. If he does, everything Gardner has tolerated from Trump, going back to Gardner calling for Trump to exit the presidential race in October of 2016 and then promptly discarding those principles after Trump won, comes back to haunt him.

Instead, Gardner faces more disastrous interviews like this one. Many, many more.