Is “UkraineGate” The Tipping Point? Is Anything?

UPDATE: As the Washington Post reports, President Trump now admits that he spoke about Vice President Joe Biden in a conversation with the President of Ukraine:

President Trump suggested Sunday that he mentioned former vice president Joe Biden and his son Hunter in a phone call with the leader of Ukraine, as Democrats ramp up their calls for accountability amid swirling questions about whether Trump sought to use his influence to seek reelection help from a foreign country.

In an exchange with reporters outside the White House before departing for events in Texas and Ohio, Trump was asked about his July 25 conversation with Ukrainian President Volodymyr Zelensky. The Washington Post reported last week that Trump pressured Zelensky to investigate a company with ties to Hunter Biden, and the call between Trump and Zelensky is the subject of an extraordinary whistleblower complaint.

So much for that “deep state attack” theory. 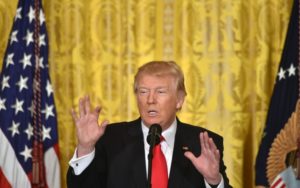 The New York Times brings us up to speed on the latest scandal to erupt from within the Trump administration–and this one could be the worst yet, an abuse of presidential power that should force even many of Donald Trump’s most intractable defenders to concede he’s gone too far:

In a July 25 phone call, Mr. Trump is said to have pressed the president of Ukraine, Volodymyr Zelensky, to investigate Mr. Biden’s younger son, Hunter, who sat on the board of a Ukrainian energy company. Mr. Trump has seized on an unsubstantiated theory that Mr. Biden was trying to protect the company from prosecution when he called for the firing of Ukraine’s top prosecutor in 2016. Rudolph W. Giuliani, one of Mr. Trump’s personal lawyers, has pushed the Ukrainian government to investigate the matter.

Why is this coming up now?

Because of an intelligence community whistle-blower who filed a complaint last month about the president’s actions. An inspector general deemed the complaint “credible” and “urgent” and forwarded it to the acting director of national intelligence, Joseph Maguire, who has refused to share it with Congress. The issue was brought into the open when the House Intelligence Committee chairman, Representative Adam B. Schiff, Democrat of California, sent an angry letter to Mr. Maguire on Sept. 10 demanding the complaint be shared with his panel.

The Times reports that subsequent to this July 25 phone call, the U.S. government blocked a shipment of arms to Ukraine intended to help the country defend itself from a Russian-backed insurgency in the eastern part of the country. Rudy Giuliani, the president’s personal lawyer, has been pressuring Ukrainian officials to go after Joe Biden’s son in separate meetings–delivering the message from both the official and political side of the Trump cabal.

Because the administration is refusing to share the whistleblower complaint, there’s a lot of details about this situation that haven’t been made public yet. There can be little question that manipulating a foreign country to take actions in support of Trump’s re-election campaign would be a very serious abuse of power, a grave offense for which impeachment is not only an option but arguably an urgent necessity. But in response to these new damning allegations, Republicans are once again circling the wagons around Trump:

Sen. Josh Hawley of Missouri, considered one of the nation’s most indefatigable Trump defenders, went further:

“It looks to me like another deep state attack,” Sen. Josh Hawley (R-Mo.), a top Trump booster, said Friday morning on Fox News. “We have seen this over and over and over in this administration from anonymous sources deep inside the bureaucracy.”

The Republican response to this latest scandal raises serious questions about whether anything Trump says or does at this point can be effectively challenged. With each new revelation of misdeeds by Trump that would bring down other presidencies, Republicans rush to legitimize and rationalize the situation–upgrading Trump’s unprecedented behavior to the “new normal.” After the extreme scrutiny of President Barack Obama’s administration by majority Republicans in Congress for the last six years of Obama’s presidency, the ability of Republicans to routinely brush off crimes by Trump that would have had them running to impeach Obama is absolutely devastating to their credibility.

But even that may not matter as long as the Republican base is submerged in pro-Trump propaganda, which it is to an historic extent as Fox News and the conservative mediasphere shovel whatever rationalizations they have to at the faithful in order to keep them cheering. For Democrats, these new allegations are up against the pressing clock of the 2020 elections, and it remains an open question whether impeachment would make political sense–rather than simply letting the voters throw Trump out of office in thirteen months as the polls show is highly likely.

Trump’s apparently total disregard for legal and ethical boundaries was predicted long before he became President. The difficulty of removing a sitting President, especially with the President’s party in control of the Senate and seemingly willing to run cover for anything he says and does, may well mean that no matter how bad it gets, the only remedy is the next election.

The lesson here for anyone who values the institutions and the standards that existed before Trump became President is that what happened in 2016, to Republicans and to Democrats, is something voters can never let happen again. Elections matter, and the damage from making the wrong choice is very hard to undo.