Earlier this week we took note of a sharp rebuke of Republican Presidential candidate Donald Trump by Bill Owens, the last Republican to serve as Governor in Colorado.

As longtime Colorado political journalist Ernest Luning Tweets this morning, Colorado Republicans are scrambling to convince legislative campaigns across the state to ignore the rebuke from Owens:

Why the sudden concern over a scolding from a Governor who was last in office in 2006? Because Republicans are absolutely terrified about backlash from fervent Donald Trump supporters costing them critical votes in tight down ballot races. Republicans such as Rep. Mike Coffman (R-Aurora), Sen. Cory Gardner (R-Yuma), and Darryl Glenn (R-Colorado Springs) finally spoke out against Trump last weekend (Glenn, of course, backtracked a few days later) in the wake of a video showing Trump making horrible comments about women. Trump diehards immediately lashed out in response by attacking Coffman, Gardner, Glenn and others for not staying loyal to the GOP nominee for President.

Check out this meme that is making the rounds on Facebook among Colorado Trump supporters: 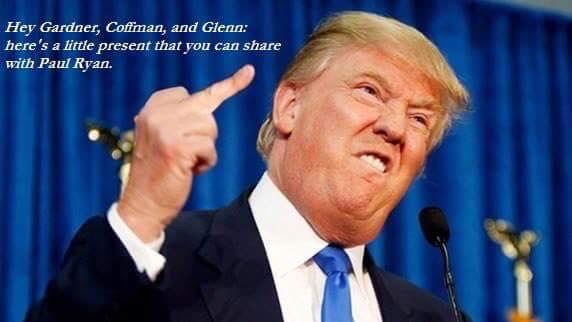 We’ve long written in this space that Republicans have found themselves in a difficult spot in 2016. If they don’t refute Trump — particularly as he becomes more offensive by the day — then they risk losing Independent and Unaffiliated voters. But if they do rebuke Trump, they may be pushing these same diehard Trump supporters to ignore other key down ballot battles.