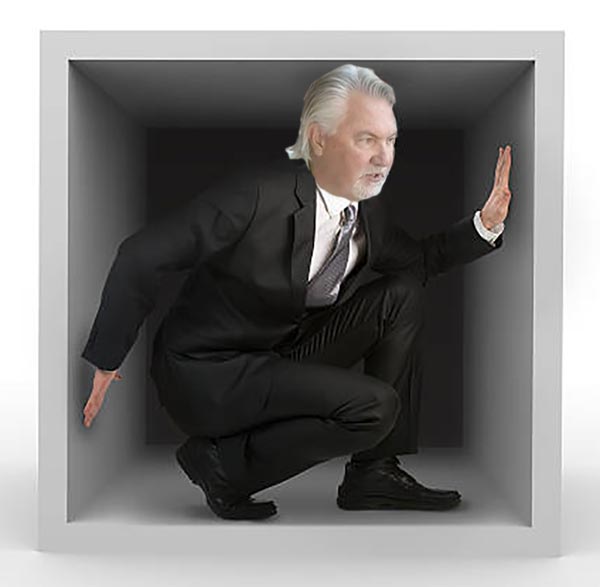 Wait, this isn’t a circle!

Republican Senate candidate Joe O’Dea has a lot of positions on a handful of important issues — many of which he squares into the shape of a circle over time.

O’Dea’s penchant for massaging his own beliefs has been most apparent on the issue of abortion rights. His waffling on this issue has become so well-known among political journalists that he was recently used as a cautionary tale in an episode of the national NPR Politics Podcast during a discussion about Ohio Republican Senate candidate J.D. Vance:

[Joe] O’Dea has some sort of inconsistencies [on abortion rights] which Democrats are focusing in on as a big issue in the race.

O’Dea can perhaps explain these “inconsistencies” in person to Vance, who he will be seeing a lot this week as both participate in a couple of “MAGA Republican” fundraising events. O’Dea was among the attendees at a fundraiser for Republican Senate candidates in Miami, Florida on Thursday evening that was hosted by a cringeworthy group of big GOP donors. O’Dea will spend the rest of the weekend at Sea Island in Georgia, where the National Republican Senatorial Committee (NRSC) is putting on a two-day retreat that includes a golf tournament and clay shooting for the #HorseSushi type of crowd. 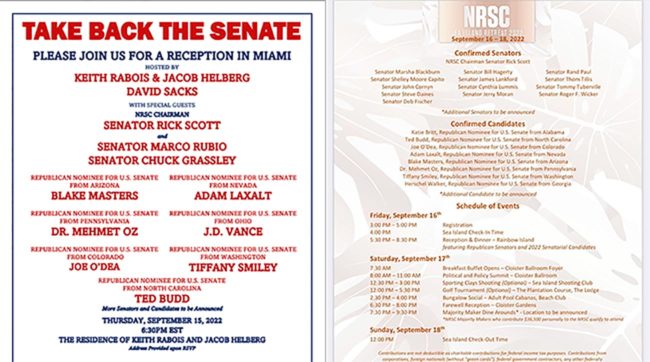 For a guy who has tried hard to distance himself from his past support for former President Donald Trump and other “MAGA Republican” election deniers, it’s remarkable how often O’Dea keeps appearing with these very same people at Republican events — whether in Colorado or across the country.

Given the company that O’Dea is keeping this weekend — including the likes of Vance and Arizona Senate hopeful Blake Masters — it’s worth taking another look at how O’Dea’s public comments about “MAGA Republicans” and the Jan. 6, 2021 insurrection have changed over a relatively short period of time…

“That’s a rally in my opinion.”

During a Republican Senate candidate forum in Evergreen, Colorado, O’Dea expressed a remarkably strange opinion about the insurrection that does not track with his efforts to portray himself as more mainstream Republican candidate. As the Colorado Times Recorder reports:

While O’Dea has consistently said Republicans should move on from the 2020 election and focus on future elections, he said he had friends at the Jan. 6 riot and preferred to call it a “rally” instead of an insurrection while answering a question at a February candidate forum in Evergreen.

“I had friends that were out at January 6, they went nowhere near the building,” O’Dea said. “That’s a rally in my opinion.” [Pols emphasis]

This is a completely ridiculous thing to say, of course, which is probably why O’Dea has been walking it back over time.

— Joe O’Dea on whether former President Trump deserves any blame for the Jan. 6 insurrection (June 2022)

During a final pre-Primary candidate forum hosted by The Colorado Sun and CBS4 Denver, O’Dea said that he would support Trump if he were the Republican

nominee for President in 2024 and agreed with then-opponent Ron Hanks that Trump was not to blame for the Jan. 6, 2021 attack on the U.S. Capitol. From The Colorado Sun:

Both candidates said Trump does not deserve blame — even in part — for the events that unfolded on Jan. 6.

A few weeks later, the newly-minted Republican nominee for U.S. Senate in Colorado told FOX News that he wasn’t paying any attention to revelations coming out of the Jan. 6 House Committee hearings. Left unsaid was that he hoped no Colorado voters were paying attention, either.

Following the FBI’s raid on Mar-a-Lago in search of classified documents illegally-held by Trump, O’Dea confirmed to 9News that he would still support Trump for President in 2024. 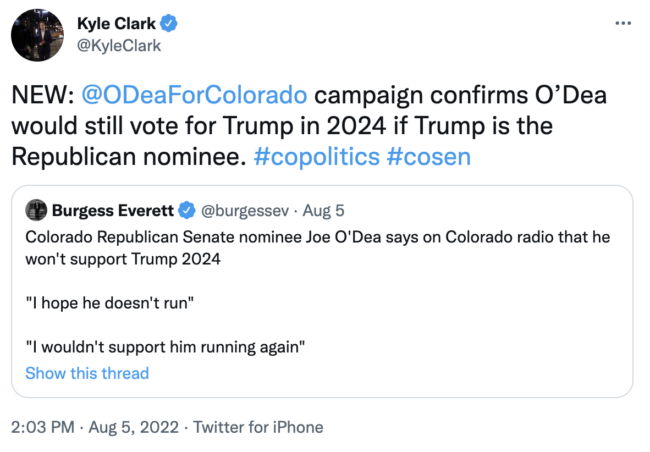 Later in August, O’Dea would say publicly — TWICE — that the raid on Mar-a-Lago was a “political stunt.” As more information emerged about the reasoning behind the Mar-a-Lago raid, O’Dea’s comments began to look increasingly terrible. Let the backtracking begin (again)!

Perhaps I Misheard Myself… (September 2022)

“I’ve said that [Trump] does bear some blame.”

In his first campaign interview with 9News, O’Dea claimed that he does NOT believe that Trump is blameless related to the Jan. 6 insurrection. Unless you skipped all of the other words above this point, you are well aware that this is NOT what O’Dea said just a few months ago.

KYLE CLARK: Okay. Okay. You’ve said that President Trump doesn’t deserve any blame for the January 6 attacks. You don’t think that he egged on those people to do what they did.

JOE O’DEA: I’ve said that he does bear some blame. And I’ve also said it’s a black eye on the country. And I believe he could have done a lot more to dissuade that crowd, three and a half hours to come out and say stop, that’s too long, he should have used his position to stop that immediately. I don’t believe in violence. Anybody that was violent that day deserves to be accountable, just like through all the protests.

In this same interview, O’Dea generally tries avoiding the topic of Trump and “MAGA Republicans” altogether: 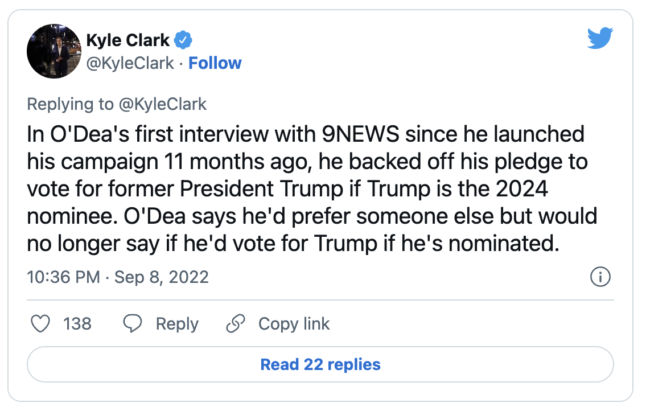 The “MAGA Republican” circle is complete…