We’ve been having a lot of fun with Republican Senate candidate Joe O’Dea’s pretend “regular guy” shtick after he posted a photo of he and his wife on social media marking a recent outing in which they rode their horses to a sushi restaurant. #HorseSushi remains one of the more bizarre things we can recall hearing from a candidate for public office — particularly one trying so hard to brand himself as an “everyman” — and it looks like it won’t be going away anytime soon.

Early last week, Democratic Sen. Michael Bennet joined in on the fun, saying this to MSNBC:

“This is a guy who literally posted on Facebook a picture of him and his wife riding their horses to buy sushi in his fancy neighborhood, so I don’t know who needs to prove who’s in touch with working Coloradans.”

A few days later, O’Dea joined Bret Baier of Fox News to talk about the passage of the Inflation Reduction Act and #HorseSushi. The rocket surgeons at O’Dea’s campaign decided to post the entire video clip of the interview…including this spectacular split screen: 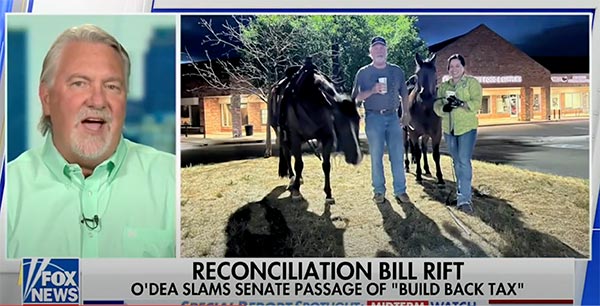 Even Bret Baier and Fox News can’t help but bring up #HorseSushi, and we don’t blame them one bit. It’s weird and it’s hilarious — although decidedly less amusing to a clearly-nervous O’Dea whose response is pretty weaksauce:

BAIER: Alright, your response to what Sen. Bennet said…

O’DEA: Wow, he sounds a little unhinged there — a little upset about my horses. But, uh, I’ve been riding horses all my life and, uh, they’ve been a labor of love, and, uh…I just can’t believe that he’s calling it an ‘inflation reduction.’ It’s a tax.

Yeah, it’s your horses that everybody is laughing about, “regular guy” Joe. But we’ll give him credit for (inadvertently) bringing a bipartisan spirit to his Senate campaign — O’Dea is doing things that both Democrats and Republicans can laugh about.