Horse Sushi: The Joke that Keeps on Giving

Senator Michael Bennet was a guest on MSNBC with Chris Jansing recently when he was asked about the fact that his Republican opponent, Joe O’Dea, alleges that Bennet is out of touch with Colorado voters.

Bennet’s response was a good one.

Click here for the entire 6-minute interview, or watch below for the #HorseSushi:

Jansing asks Bennet about the fact that O’Dea claims the Democratic Senator is “raising taxes on struggling Colorado residents while you’ve been getting rich.” Jansing concludes by asking, “how can you relate to the average person in your state?”

BENNET: Well, first of all, I wish that were true about my wealth. I don’t know where he got those numbers and I know when my wife and kids see them, they’re going to wonder where I’ve been hiding it because it’s not remotely true.

Second, this is a guy who literally posted on Facebook a picture of him and his wife riding their horses to buy sushi in his fancy neighborhood, so I don’t know who needs to prove who’s in touch with working Coloradans. [Pols emphasis] 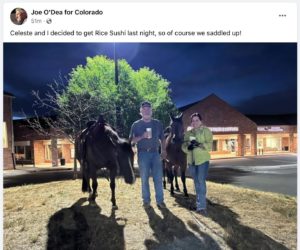