So, About Those Nuclear Weapons Secrets Trump Was Hoarding… 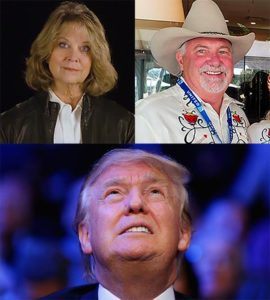 When the Mar-a-Lago home of former President Donald Trump was raided by the FBI in early August, MAGA Republicans across the country were quick to jump to Trump’s defense. As more details began to emerge regarding the crimes that Trump and his cronies may have committed — including violations of the FREAKING ESPIONAGE ACT — some Republicans started to realize how silly they looked in falling over themselves to stand in front of the train barreling down on The Big Orange Guy.

While smarter Republicans gradually backed away from defending Trump, others dug in their heels. In Colorado, Republicans such as U.S. Senate candidate Joe O’Dea quickly found themselves stuck inside a rhetorical box of their own making. O’Dea has called the raid on Mar-a-Lago a “political stunt” on at least two separate occasions, which was a weird thing to do for a guy who had been spending months trying to distance himself from prior comments supporting the former President.

And then there’s “Secession” Barb Kirkmeyer, the Republican candidate for Congress in CO-08. During a Republican event in Windsor in late August, Kirkmeyer promised to investigate both the FBI and the Justice Department to “hold them accountable” for, presumably, doing their jobs instead of letting Trump do whatever he wants.

As The Julesburg Advocate reported on Aug. 26:

Barb Kirkmeyer, who is running for the new Congressional District 8 seat [Kristi] Burton Brown predicts will be a Republican win in Congress, took aim at inflation, border security and offered a reminder of the country’s exit from Afghanistan. She has initially discussed, with potential House Speaker Kevin McCarthy, policy in the next session.

“We’ll bring in groups like the Department of Justice and the FBI and hold them accountable,” said Kirkmeyer, who is opposed by Democrat State Rep. Dr. Yadira Caraveo.

Now, the problem with calling the Mar-a-Lago raid a “political stunt” or pledging to investigate the FBI and the Justice Department for its actions is that these comments look and sound pretty ridiculous as more information emerges about what Trump was doing with all of these sensitive classified documents.

“We’ll bring in groups like the Department of Justice and the FBI and hold them accountable.”

As The Washington Post reports, Trump was hoarding documents that did, in fact, contain highly-sensitive information about nuclear weapons:

A document describing a foreign government’s military defenses, including its nuclear capabilities, was found by FBI agents who searched former president Donald Trump’s Mar-a-Lago residence and private club last month, according to people familiar with the matter, underscoring concerns among U.S. intelligence officials about classified material stashed in the Florida property. [Pols emphasis]

Some of the seized documents detail top-secret U.S. operations so closely guarded that many senior national security officials are kept in the dark about them. Only the president, some members of his Cabinet or a near-Cabinet-level official could authorize other government officials to know details of these special-access programs, according to people familiar with the search, who spoke on the condition of anonymity to describe sensitive details of an ongoing investigation.

Documents about such highly classified operations require special clearances on a need-to-know basis, not just top-secret clearance. Some special-access programs can have as few as a couple dozen government personnel authorized to know of an operation’s existence. Records that deal with such programs are kept under lock and key, almost always in a secure compartmented information facility, with a designated control officer to keep careful tabs on their location.

In other words, documents that shouldn’t have been sitting in boxes in a basement closet at Mar-a-Lago. When The Washington Post first reported concerns about sensitive nuclear documents at Mar-a-Lago, Trump proclaimed the story to be a “hoax.”

Former Trump Attorney General Bill Barr has been unambiguous in defending the FBI and the Justice Department instead of backing up Trump’s misdirection. Yesterday was Barr’s second big appearance on Fox News in the last week:

Bill Barr on Fox News on Judge Cannon’s special master ruling: “The opinion I think was wrong, and I think the government should appeal it.” pic.twitter.com/69lvq0Hr9W

As Steve Benen wrote on Tuesday for MSNBC:

The question for rank-and-file Republicans becomes obvious: If even Bill Barr recognizes the seriousness of the Mar-a-Lago scandal, why can’t they?

Andrew Desiderio and Nicholas Wu of POLITICO came to a similar conclusion:

In the days since the FBI search of Donald Trump’s home, GOP lawmakers and allies of the former president have offered increasingly strained responses when it comes to his possession of classified and top-secret documents at his Mar-a-Lago estate.

While the vast majority of Republicans leaped to defend Trump after the FBI executed a search warrant on his Florida residence, the rapidly unfolding investigation — including revelations that he refused to turn over sensitive and top-secret records — has left all but Trump’s staunchest allies tangled in knots. [Pols emphasis]

If the steady stream of bad news coming out of the Mar-a-Lago raid is any indication, this story is going to continue to get worse for Trump and MAGA Republicans like O’Dea and Kirkmeyer.

You’d think politicians would have learned by now that it’s not wise to go out on any limb in which Trump is already perched. O’Dea and Kirkmeyer may have to re-learn this lesson in November.