Get More Smarter on Tuesday (February 16)

There is an expected high temperature of 43 degrees Fahrenheit in Denver today; compared to the last few days, that’s practically beach weather. Now, let’s get even more smarterer. If you think we missed something important, please include the link in the comments below (here’s a good example). If you are more of an audio learner, check out The Get More Smarter Podcast. And don’t forget to find us on Facebook and Twitter.

► The Colorado legislature is back in session today after postponing action for more than a month out of concerns related to the COVID-19 pandemic. Saja Hindi previews the session for The Denver Post with a list of some of the more notable bills on the agenda.

Alex Burness of The Denver Post is covering opening day speeches from the likes of Senate President Leroy Garcia, while Hindi is tracking the speechifying of Speaker Alec Garnett and other House leaders. Colorado Public Radio has more on Garnett as he takes control of the gavel as the new House Speaker.

► As had been expected, on Saturday Senate Republicans voted to acquit former President Trump on the impeachment charge of inciting an insurrection. Colorado Senators Michael Bennet and John Hickenlooper both voted “YES” on impeachment.

The Denver Post has more on how the impeachment trial raised the political profiles of two Colorado Members of Congress:

For 138 minutes this week, two Coloradans stood on the floor of the United States Senate and claimed that, for the first and only time in American history, a president incited an insurrection against his own country.

Their arguments earned pundits’ praise and handed them a national audience. They fueled talk of future political ascensions and sent search engines looking for more.

Both Del. Stacey Plaskett and Rep. Joe Neguse have emerged from the impeachment proceedings with national platforms and as high-profile faces of a Democratic coalition that’s younger and more diverse than its leaders. https://t.co/dcsfIg3V4V

► As The Washington Post reports, it’s colder than Santa’s reindeer in much of the United States:

At least 12 people are dead in four states from the effects of a record-shattering cold snap and series of winter storms. In Texas, as the electricity grid struggles to keep pace with record high demand amid a historic cold outbreak, people are turning to unsafe means to heat their homes. A woman and a girl died from carbon monoxide poisoning in Houston after a car was left running in a garage to keep them warm, according to police.

The Arctic air has also claimed the life of at least one homeless person in Houston, and a 10-year-old boy died after he fell through ice near Millington, Tenn. A tornado associated with the storm system that helped draw Arctic air to the south struck in North Carolina overnight, killing at least three and injuring 10.

For the first time in history, the entire state of Texas is under a weather-related State of Emergency, where some 4.4 million people are still without power.

► Hospitalizations related to COVID-19 continue to decline in Colorado, though there is still much concern about new variants of the virus.

► The Washington Post updates us on the guy who took an assault rifle to Comet Ping Pong in order to put a stop to the child sex trafficking/cannibalism ring that was taking place in the restaurant’s basement. Edgar Maddison Welch ultimately realized that there was no truth to the “Pizzagate” conspiracy theory when he figured out that Comet Ping Pong didn’t even have a basement:

Pizzagate was an early warning of how misinformation can lead to violence, said Joan Donovan, a scholar of media manipulation, social movements and extremism.

“The big difference between 2016 and Pizzagate and QAnon [now] isn’t the themes … it’s the scale,” said Donovan, research director of the Shorenstein Center on Media, Politics and Public Policy at the Harvard Kennedy School. “Four years later it has reached so many more people.”

Welch served more than three years in prison and appears to understand the foolishness of his prior belief:

“I came to D.C. with the intent of helping people I believed were in dire need of assistance,” Welch wrote later in a letter to the judge in his case. “It was never my intention to harm or frighten innocent lives, but I realize now just how foolish and reckless my decision was.”

► The Colorado legislative session kicked off with some unusual drama today:

Whoa! @DonaldValdezCO just went to the well and asked for Rep. Ron Hanks to be removed from committees and expelled from the #coleg.

Newly elected Hanks was in DC on Jan. 6.@AlecGarnett quickly gaveled Valdez and verbally reprimanded him for the topic. #copolitics

Here’s more background on why there is a concern about freshman Rep. Ron Hanks (R-Penrose).

Critical U.S. Census data needed to redraw the lines of Colorado’s congressional and legislative districts is severely delayed — and state leaders aren’t sure what to do about it.

Colorado is constitutionally required to conduct the redistricting process in 2021. And the state’s citizen commissions tasked with the job must submit proposed maps by Sept. 1 (congressional) and Sept. 15 (legislative). Only, Census officials say the data won’t be available until Sept. 30.

It’s a result of pandemic-related delays and interference from the Trump administration, The New York Times reported.

► The Colorado Sun is keeping track of the six Coloradans arrested for actions related to the Jan. 6 attack on the U.S. Capitol.

► Disgruntled Republicans in Colorado are looking into forming their own political party, potentially called “The Patriot Party.” As Greg Sargent writes for The Washington Post, the Republican Party doesn’t seem like a fun gang these days.

Elsewhere, Chris Cillizza of CNN looks at more coming trouble for the GOP:

In the last 48 hours, two things have happened that suggest the Republican Party is likely headed to an all-out civil war:

1. The Wall Street Journal editorial board — the pillar of establishment conservative thought in the country — wrote this of former President Donald Trump (bolding is mine):

“Mr. Trump may run again, but he won’t win another national election. He lost re-election before the events of Jan. 6, and as President his job approval never rose above 50%. He may go on a revenge campaign tour, or run as a third-party candidate, but all he will accomplish is to divide the center-right and elect Democrats. The GOP’s defeats in the two Jan. 5 Georgia Senate races proved that.

“The country is moving past the Trump Presidency, and the GOP will remain in the wilderness until it does too.”

2. A new Quinnipiac University national poll shows that three-quarters of Republicans (75%) want Trump to “play a prominent role” in the GOP going forward.

► Governor Jared Polis is pushing lawmakers to go big on a COVID stimulus package, as The Colorado Sun reports:

But the question of how big the package should be and how fast the General Assembly should move to pass it remain sticking points. That’s not to mention questions about where the money should be spent.

Polis wants lawmakers to act fast and allocate at least $1 billion to the recovery in a way that “builds Colorado back stronger” through “shovel-ready” infrastructure projects. That includes repairs to the Eisenhower-Johnson Memorial Tunnels, building new wildlife migration corridors and expanding rural broadband access.

“This is a once-in-a-generation opportunity,” said Polis, a Democrat, promising that thousands of jobs would be created.

► We’re tempted to wonder out loud if Rep. Lauren “Q*Bert” Boebert truly doesn’t understand the impeachment process, but then we remembered that there is not a lot of thought that goes into much of anything she says. 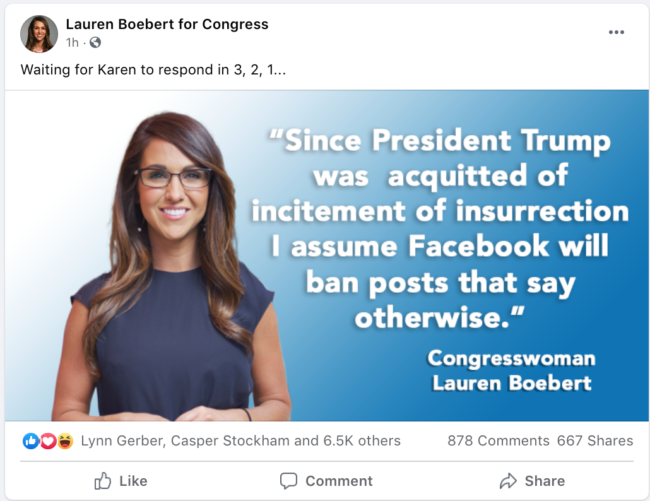 ► This is not an Abbott and Costello comedy routine:

► Grossly mishandling your state’s response to the COVID-19 pandemic appears to be a springboard to national office for Republican Gov. Ron DeSantis.

► Congressional earmarks may be making a comeback.