“Our case was strong, the facts were clear and the evidence we presented was overwhelming. This was the largest bipartisan vote to impeach a president ever, and even Mitch McConnell agreed that we proved our case. It’s shameful that so many Senate Republicans chose to hide behind a faulty technicality instead of considering the facts as we had laid them out.

“President Trump incited a violent insurrection against our government. He used his platform as the president of the United States to launch a deadly attack on the U.S. Capitol building to try to stop Congress from certifying the election for his opponent. It was the highest of high crimes. It was the greatest betrayal of office. And it was the most brazen attack on our own government by a sitting U.S. president that our nation has ever seen.

“Our goal in pursuing a conviction against Donald Trump for his conduct was not to punish him, but to prevent the type of violence that took place that day from ever happening again. While we didn’t get the conviction we ultimately sought, I believe we made our case to the American people. And that’s just as important because, at the end of the day, they are now the ones who will ultimately decide whether Donald Trump is ever allowed to hold public office again.” 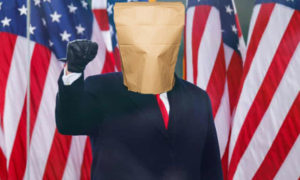 Senate Republicans voted against convicting Donald Trump Saturday for inciting his supporters to storm the Capitol Jan. 6, bringing a swift end to the former president’s second impeachment trial after Democrats abandoned plans to call witnesses in the face of GOP opposition.

There was never much of a question about whether Senate Republicans would vote to acquit former President Trump on impeachment charges for inciting an insurrection. There were enough Trump lackeys in the Senate who had made up their minds on impeachment well before the trial even began; that includes Texas Republican Sen. Ted Cruz, who advised Trump’s legal team on strategy and said on his podcast Friday that he told Trump’s team that they had “already won.”

As the Post reports, the vote to acquit Trump came after the Senate voted to allow witness testimony to take place in the impeachment trial:

The drama earlier Saturday began when lead House impeachment manager Jamie Raskin (D-Md.) opened the day’s proceedings with an unexpected request to call Rep. Jaime Herrera Beutler (R-Wash.) as a witness following reports of her account that Trump had refused the entreaties of House Minority Leader Kevin McCarthy (R-Calif.) to call off the rioters.

Herrera Beutler described an expletive-laden phone call in which Trump falsely claimed that the rioters were members of antifa, the loose-knit movement of sometimes violent liberal activists. He also accused McCarthy of caring less about Trump’s efforts to overturn Biden’s victory than the rioters did.

Senate Majority Leader Charles E. Schumer (D-N.Y.) had told Democrats earlier Saturday that the decision about witnesses would be left to the House managers. So after Raskin’s request, the chamber voted 55-45 to allow witnesses, with five Republicans joining Democrats and with the chamber sliding into uncertainty as groups of senators huddled for hours to figure out what would come next.

Despite the vote, Senate Democrats remained cool to the idea of calling witnesses and extending the impeachment trial, believing that no amount of evidence was going to dissuade Trump backers from sticking with the former President. House impeachment managers ultimately agreed and allowed the proceedings to come to a close with a final vote. 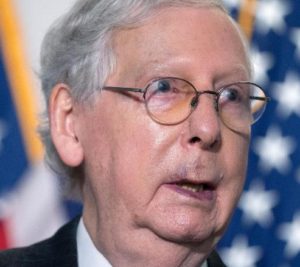 McConnell can talk himself blue in the face, but that won’t excuse another acquittal.

Senate Republicans will now try to explain their decision to let Trump skate while many also acknowledge the damage caused by The Big Orange Guy. As The Washington Post reports in a separate story, Senate Minority Leader Mitch McConnell rushed to the microphone to make an ass out of himself soon after casting a vote to acquit Trump:

McConnell said Saturday that the former president is “practically and morally responsible” for provoking the Jan. 6 attack on the Capitol — but that the Senate was upholding the Constitution by acquitting him.

“The Senate’s decision today does not condone anything that happened on or before that terrible day,” McConnell said. “It simply shows that senators did what the former president failed to do: We put our constitutional duty first.”…

…McConnell spent much of his remarks condemning Trump’s actions and directly linking them to the Jan. 6 insurrection. The former president’s supporters, he argued, launched their violent attack “because they had been fed wild falsehoods by the most powerful man on Earth, because he was angry he lost an election.”

On a more positive note, Colorado Rep. Joe Neguse (D-Boulderish) put an exclamation point on a week that saw his national profile increase considerably. Neguse’s final speech urging the Senate to convict Trump on inciting an insurrection featured a number of powerful lines that will be repeated for a long time:

This cannot be our new normal.

We must set a precedent for future Presidents, to ensure that what occurred on January 6th never happens again. pic.twitter.com/BHuKC6qmRu