Colorado “Patriot Party” All Done With Your Wussy GOP 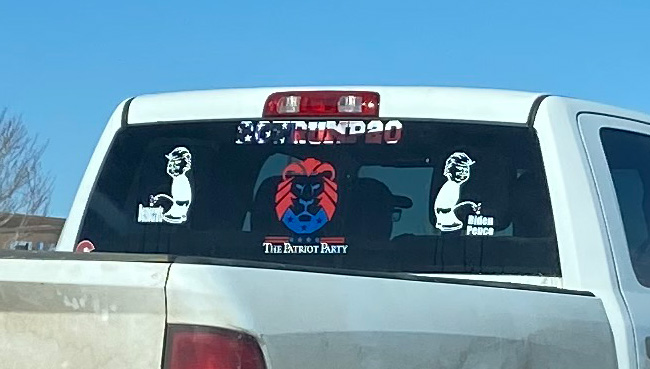 Freelance writer Daniel Newhauser reports for Colorado Newsline, echoing anecdotes we’ve seen including the photo above taken in Colorado Springs over the weekend:

Former President Donald Trump may have stepped back for now from the idea of creating a new political party, but that hasn’t stopped diehard Trump fans disillusioned with the Republican Party from creating Patriot Parties of their own all across the country.

Onetime Trump voters in Florida, Georgia, Colorado, Missouri, North Carolina, Ohio and other states have all made attempts at forming their own iterations of a Patriot Party in recent weeks…

The group’s statement of organization filed with federal campaign finance regulators lists it as the brainchild of St. Petersburg health insurance broker Brian Dow, Denver-area information technology worker Joe Faletra and Larry Glenn of Reynoldsburg, Ohio, who has a background as a treasurer.

With equal measures of secretory contempt for Democrats, Joe Biden, and former Republican Vice President Mike Pence, this “Patriot Party” early adopter photographed in Colorado Springs this weekend may just be a confused short-lived byproduct of the 2020 elections. Or, he could be a harbinger of a major division about to open within the Republican political coalition between those who accept that ex-President Donald Trump lost the election, and “Republicans” who are more personally devoted to Trump than any party–or for that matter, the rule of law itself.

The polls say a majority of Republicans are on the cult of personality side of this emerging divide. If you’re a Republican who just wants to return to the days before Trump took over their party and ran it into the ground, that’s bad news. And if you’re a “Never Trump” Republican who predicted Trump would mean the end of the Republican Party’s majority power, events may be about to fulfill your worst fears.

On the upside, here may be a political platform truly made for the post-Trump era. Piss on everybody.