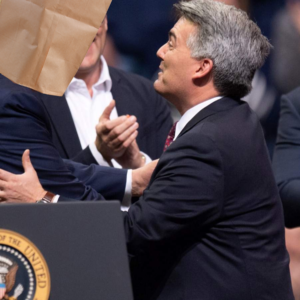 Ex-Sen. Cory Gardner (right) with he who shall not be named (left).

And as The Hill reports, the former President could end the GOP as we know it with one weird trick:

A majority of Republican voters said if former President Trump were to start a new political party they would likely join, a new Hill-HarrisX poll finds.

Sixty-four percent of registered Republican voters in the Jan. 28-29 survey said they’d join a new political party led by the former president, including 32 percent who said they would very likely join…

“If Trump were to split from the GOP and create his own party, polling suggests he might well create the second largest political party in the country, knocking the GOP down to third place,” [Dritan] Nesho added. [Pols emphasis]

Dividing the conservative coalition in American politics between the Republican Party as we knew it before Donald Trump and a new party devoted wholly to Trump’s cult of (such as it is) personality would be perhaps the greatest gift Trump could bestow on Democrats–no small feat after fueling backlash against the Trump-dominated GOP in the 2018 and again in the 2020 elections, and helping deliver the U.S. Senate to Democrats by effectively sabotaging the Georgia U.S. Senate runoff elections in January in a fit of pique over losing last November.

Divide and conquer was always Trump’s strategy. If these numbers spur Trump to action, Republicans who aided and abetted Trump’s rise to power may now be about to find out what “divide and conquer” looks like on the flip side.