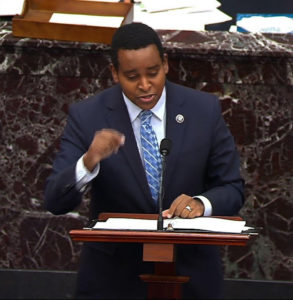 As the Denver Post’s Justin Wingerter reports, although the second impeachment trial of now ex-President Donald Trump ended in the same predictable acquittal as Trump’s first trial year ago, the compelling performance of Colorado’s two impeachment managers, Joe Neguse and Diana DeGette, has set them up for political dividends even as the immediate battle was lost:

“Neguse is really making a national name for himself through this impeachment trial,” said Michael Berry, a professor of political science at the University of Colorado – Denver…

Rep. Madeleine Dean is being talked about as a potential candidate for the open Senate seat in Pennsylvania in 2022, a top priority for the party. Democratic strategists are speculating that Rep. Joaquin Castro, relatively well-known before the impeachment trial, further distinguished himself as an impeachment manager, advancing talk of a statewide bid in Texas. And an ex-Jeb Bush aide went so far as to say that Colorado Rep. Joe Neguse gave his “2004 convention speech” — a nod to former President Barack Obama’s breakout moment in politics… [Pols emphasis]

For some of the managers, their presentations were shared widely on social media. Neguse, who is an attorney and the youngest impeachment manager, won acclaim for his compelling and high-minded arguments.

As the dean of Colorado’s congressional delegation and a member of Congress for over 25 years, Rep. DeGette already benefits from good name recognition. For Rep. Neguse, last week’s impeachment trial was more of an introduction to a nationwide audience–and Neguse did not miss the chance to make a great first impression. A preview of what was to come in this second trial was provided during the House Judiciary Committee hearings leading up to Trump’s first impeachment trial in late 2019, in which Neguse distinguished himself similarly.

@JoeNeguse is a not a rising star, he is a star.

He should be representing Colorado in a statewide capacity, hopefully sooner than later.#CoPolitics https://t.co/jRuWOMMQGL

As for upward mobility supercharged by last week’s high-profile exposure, Neguse of course must wait until the Democrats who occupy every statewide office he would consider trading up to themselves move up or out. For example, had Sen. Michael Bennet been appointed to a Cabinet position in Joe Biden’s administration, Neguse would have been by far the likeliest candidate to replace him.

Whatever comes next, there’s not a single office we can think of for which Joe Neguse would not be a stellar candidate. We talk a lot about Colorado’s deep bench of Democrats ready to move up to be the next governor or U.S. Senator or even beyond–and whether we mention him by name or not, Neguse is almost always who we’re thinking of first and foremost.

Now the whole country knows why.