Get More Smarter on Friday (April 3)

Hey, you made it through another week of this — that’s not nothing. Now, let’s Get More Smarter. If you think we missed something important, please include the link in the comments below (here’s a good example). If you are more of an audio/visual learner, check out The Get More Smarter Show or The Get More Smarter Podcast. And don’t forget to find us on Facebook and Twitter.

► The Trump administration is struggling to actually implement many of the economic relief measures contained in last month’s $2.2 Trillion spending bill. First, here’s CNN on those stimulus checks that were supposed to be coming right away:

Americans likely won’t begin to see direct payments from the coronavirus stimulus bill until at least April 13 and it could take 20 weeks for all the checks to be mailed, Trump administration officials told lawmakers, according to a House Democratic memo obtained by CNN.

The timeline means tens of millions of Americans will have to wait to get badly needed assistance, despite repeated earlier suggestions from Treasury Secretary Steven Mnuchin that the money would go out as soon as April 6.

Treasury Secretary Steven Mnuchin vowed from the White House podium yesterday that small businesses battered by the coronavirus epidemic could access $350 billion in taxpayer-backed cash quickly starting on Friday. But as the rescue effort debuts, banks are concerned in part about how to assess the risks of small businesses applying for assistance directly to them, even as the federal government is guaranteeing those loans.

JPMorgan Chase, for instance, posted a notice online that it won’t be accepting applications from prospective borrowers. “Financial institutions like ours are still awaiting guidance from the SBA and the U.S. Treasury,” it said.

Banks are asking questions about the length of the loans, the interest rates they can charge, and how much due diligence financial institutions are responsible for performing on borrowers

Take the politicians out of Washington D.C.! Put businesspeople in charge! This is working out great!

Leading disease forecasters, whose research the White House used to conclude 100,000 to 240,000 people will die nationwide from the coronavirus, were mystified when they saw the administration’s projection this week.

The experts said they don’t challenge the numbers’ validity but that they don’t know how the White House arrived at them. [Pols emphasis]

White House officials have refused to explain how they generated the figure — a death toll bigger than the United States suffered in the Vietnam War or the 9/11 terrorist attacks. They have not provided the underlying data so others can assess its reliability or provided long-term strategies to lower that death count.

Some of President Trump’s top advisers have expressed doubts about the estimate, according to three White House officials who spoke on the condition of anonymity because they were not authorized to speak publicly. There have been fierce debates inside the White House about its accuracy.

There is a non-zero chance that President Trump literally picked these numbers out of a hat.

► As CNN reports, two top Trump administration officials were publicly voicing concerns about U.S. readiness in the face of a pandemic LAST APRIL:

Health and Human Services Secretary Alex Azar and Tim Morrison, then a special assistant to the President and senior director for weapons of mass destruction and biodefense on the National Security Council, made the comments at the BioDefense Summit in April 2019.

“Of course, the thing that people ask: ‘What keeps you most up at night in the biodefense world?’ Pandemic flu, of course. I think everyone in this room probably shares that concern,” Azar said, before listing off efforts to mitigate the impact of flu outbreaks.

The Trump administration is facing scrutiny over its preparations for the coronavirus pandemic and its slow response to provide states and cities assistance in testing kits and personal protective equipment. The 2019 summit, hosted by the assistant secretary for preparedness and response in the Department of Health and Human Services to “discuss and solicit input on implementing the National Biodefense Strategy,” offers insights into early awareness of the potential for a pandemic threat.

Transcripts of Azar’s and Morrison’s comments at the summit, which have not been previously reported on, are available on the HHS website.

President Donald Trump has repeatedly said no one predicted a pandemic crisis like the one caused by coronavirus. [Pols emphasis]

► Weld County has surged to the top of the list in Colorado for the largest number of coronavirus deaths. Weld County is represented in Congress by social distancing skeptic Rep. Ken Buck (R-Greeley). Sure, maybe it’s a coincidence.

► President Trump broke out his box of crayons on Thursday to scribble out an absolutely ridiculous letter to Senate Minority Leader Chuck Schumer.

Chris Cillizza of CNN breaks out 11 facepalm-worthy lines from what he calls an “utterly childish” letter. Here’s one of the real gems:

“If you spent less time on your ridiculous impeachment hoax, which went haplessly on forever and ended up going nowhere (except increasing my poll numbers), and instead focused on helping the people of New York, then New York would not have been so completely unprepared for the ‘invisible enemy.'” 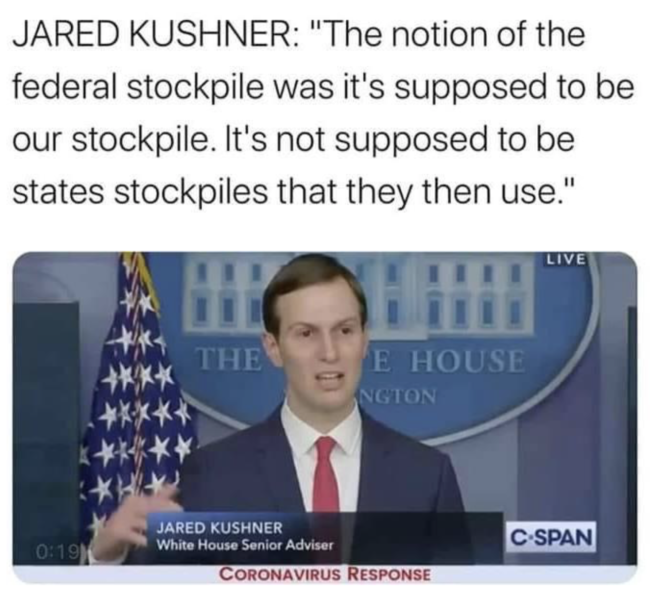 We’ll just leave you with this from CNN’s Chris Cillizza:

Kushner, it would appear, has insinuated himself into a prominent role in coordinating the administration’s coronavirus response despite no obvious qualifications — he isn’t a doctor, an infectious disease expert or someone who has run large organizations — for such a prominent role. [Pols emphasis]

► As The Washington Post explains, there remains a good deal of division in parts of the United States about social distancing measures:

In some cases, skeptics have been slow to acknowledge the science behind the spread of the novel coronavirus. In others, such as Florida, politicians took heed of demands from the business community, which lobbied DeSantis as recently as during a Monday webinar to balance medical imperatives with economic needs. Elsewhere, adamance about local autonomy was pronounced. Some, meanwhile, maintained that it was religious authority that mattered…

…Experts are now warning that a group of governors in the South and the Great Plains — largely Republican-led states — risk acting too late.

Alabama, for example, has more than 1,100 cases, with just five counties untouched by the virus. New infections have risen as sharply as in California.

In some cases, the resistance has led to rising political tensions, with often Democratic mayors imposing orders of their own that they acknowledge have limited effect when surrounding jurisdictions do not act.

► The New York Times looks at the now-ridiculous market for medical masks.

► According to a press release from the office of Rep. Jason Crow (D-Aurora):

Representative Jason Crow (CO-06) announced today that counties and municipalities in the 6th Congressional District will receive more than $4.7 million in COVID-19 Recovery Grants as part of the Coronavirus Aid, Relief, and Economic Security (CARES) Act. Arapahoe and Adams Counties will receive a combined $1.7 million dollars in COVID Recovery Community Development Block Grants (CDBG) and Aurora and Thornton will receive over $3 million in funding from the CDBG Program and Emergency Solutions Grants (ESG). The state of Colorado will also receive $327 million in transit funding.

Elsewhere, RTD will receive a badly-needed $232 million in federal funding as ridership plummets during the coronavirus outbreak. Colorado First Responders will receive $14 million.

► Colorado is extending until April 30 the deadline to apply for health insurance coverage through the state network.

► Alex Burness of The Denver Post sits down for a coronavirus Q&A with Gov. Jared Polis.

► The NRA is sad that the state of New York deemed gun stores to be “non-essential businesses.”

Here in Colorado, officials are cracking down on businesses that are ignoring orders to close down.

► You’ve probably seen the stories about how the pandemic is proving to be beneficial to the environment. As Colorado Public Radio reports, it may soon make it harder to measure the impact.

Ernest Luning has more for the publication formerly known as the Colorado Statesman:

Nearly every Republican elected official from El Paso County on Thursday demanded that the county GOP chairwoman issue a formal apology and consider resigning after she asked in a social media post if the coronavirus pandemic could be a plot to deceive the public, calling her suggestion “reprehensible.”

“This is not who we are as a Party,” the 17 Republican officials wrote to Vickie Tonkins, the El Paso County GOP chairwoman, in a scathing email obtained by Colorado Politics.

► The Washington Post polls some political experts and asks if President Trump or former Vice President Joe Biden has the advantage in the 2020 Presidential race. SPOILER ALERT: Only one person picked Trump.

► The Colorado Republican Party is running a newspaper ad that says Sen. Cory Gardner is responsible for “record unemployment.” Whoops!

► President Trump is meeting today with oil company executives. The Center for Western Priorities issued the following press release in advance of that meeting:

Today, President Trump is expected to meet with CEOs from major oil corporations and trade associations. The meeting comes as a broad range of oil companies and their allies in Congress call on the administration to reduce or suspend royalties for oil and gas produced on public lands, extend the terms of drilling leases and permits, and reduce environmental enforcement. In response, the Center for Western Priorities released the following statement from Executive Director Jennifer Rokala:

“The oil industry has spent the last decade racking up debt at a breathtaking pace and now they’re asking taxpayers to bail out their bad business practices. The oil industry’s wish list is shameless—rip off taxpayers and leave communities vulnerable to even more contamination. But with a former oil lobbyist in charge of the Interior Department, they will likely get what they want…

…Oil industry players have long sought to reduce royalty rates for publicly owned oil and gas. Two years ago, a committee created by Interior Secretary Ryan Zinke and stacked with industry officials recommended dramatically slashing offshore royalty rates from 18.75% to 12.5%. A federal judge found the panel was so stacked with industry officials that it violated the law, ruling the administration could not act on the panel’s recommendations.

Federal royalty rates for producing oil and gas on public lands are much lower than those charged by leading oil-producing states. Texas and New Mexico charge rates of up to 25% and 20%, respectively, compared to the 12.5% federal rate. Over the last five years, taxpayers could have received more than $10 billion had higher onshore royalty rates been in place.

► Governor Jared Polis issued guidance to municipal governments across the state on proceeding with local elections scheduled for April 7.

► The Colorado Supreme Court ruled late Wednesday that state lawmakers can resume their work at the State Capitol and not have to worry about whether the 120-day limit for each session refers to consecutive days. Now that they know their work can resume at some point, Democrats are getting antsy about all the work in front of them.

► We totally disagree. This Cleveland television station has it right:

► Colorado’s Republican Congressional delegation does what it does best: Point fingers at other people.

► The Colorado legislature will return this session, much to the chagrin of Republicans.