Several Colorado Republican leaders are calling for El Paso County GOP Chair Vickie Tonkins to resign after she used the party’s official Facebook page to ask followers if they believe the COVID-19 pandemic is a manufactured hoax.

She also confirmed to Colorado Politics reporter Ernest Luning that she wrote on her personal Facebook page that the outbreak is a “PSYOP,” using the same term she posted to the county page. The post has since garnered bipartisan national attention, including a tweet from Guy Benson, political editor of the conservative blog Townhall, and coverage from the left-leaning sites Raw Story and Huffington Post.

Reached for comment, Tonkins dismissed criticism over the post itself, attributing it to the tension between the establishment and grassroots elements of the party, and claiming Bremer had other reasons for sharing the post:

“The individual [Bremer] that started the misinformation of my saying Coronavirus is a hoax…which I never said…does not like the fact a black woman is in the position and won by over 60 votes… The grassroots said they wanted something different and who could be more different than me.”

While Tonkins did not state that Coronavirus is a hoax on the El Paso County page, she did describe the outbreak as a “PSYOP,” in a comment exchange on her personal page. Another El Paso County Republican, Missy Ward, shared a screenshot of the comment.

“Ward, without my permission, took a screenshot of my personal page and made this a story. The post may not have been up for even an hour…but they saw an opportunity to get me, I guess. Not sure why they hate me so much but that is what it is.”

Tonkins also says she was focused on those who are suffering financially during the pandemic.

“My intentions, which my naysayers say we should always look at, is that people are not just dying from this virus, people are losing their jobs and can’t pay their bills and is time we step up to help them. Maybe had I put “the media thinks” [in the original post] I would have been heralded as a hero. This has been blown out of proportion by my haters and I say let’s move toward helping our communities which is my heart and the heart of the Republican Party. People are making this about politics and I am thinking about people!”

Joe Webb, who led the Jefferson County GOP until last year, concluded his own public Facebook post about the incident by insisting Tonkins resign, and calling on the county party’s executive committee to remove her if she doesn’t.

This is not a time to play politics but because Vickie Tonkins added to the public health emergency and may have assisted in making the curve steeper regarding infections she needs to resign as Chairman of the El Paso County Republican Party at once. If she fails to do so then members of the Executive Committee must take matters into their own hands within social distancing parameters. We all need to contribute to flattening the curve. Many other reasons exist for her resignation but I listed the most serious one. Personal responsibility for your actions should matter.

Denver GOP Chair shared Webb post noting that she agreed with Webb. She added that Tonkins’ post jeopardizes the Republican Party’s mission of electing its candidates. 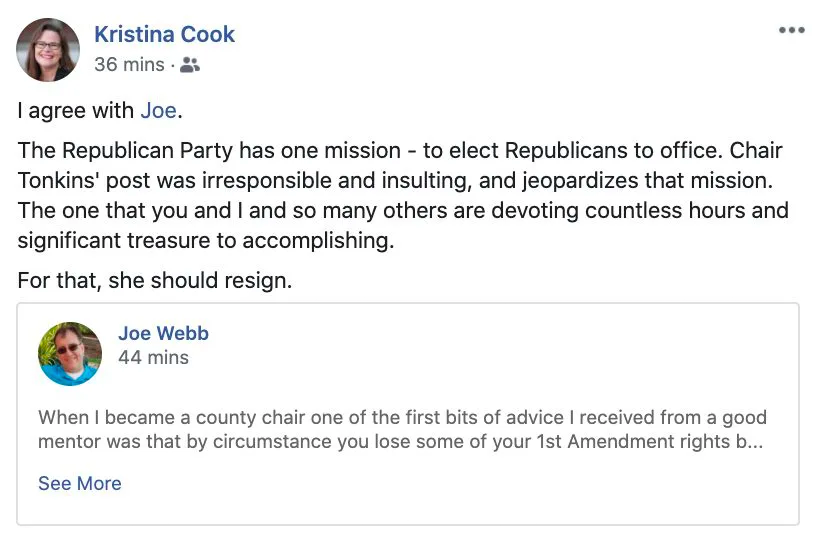 Asked if the Colorado Republican Party had asked or is going to ask Tonkins to step down, spokesperson Kyle Kohli said hadn’t had that conservation with party leaders but would relay the question.

The party has not been shy about demanding officials resign over social media posts involving the coronavirus. On March 3 Kohli called for Denver Councilwoman Candi Cdebaca to step down after retweeting a “sarcastic” tweet about someone with COVID-19 intentionally attending Trump rallies adding “#solidarity Yaaas!!”

On April 2, the party praised Congressmen Buck, Tipton and Lamborn for their support of a resolution intended to hold China accountable for its “misinformation campaign” regarding COVID-19.

Tonkins said she has had conversations with the state party following the controversy, but that she was not formally asked to step down.