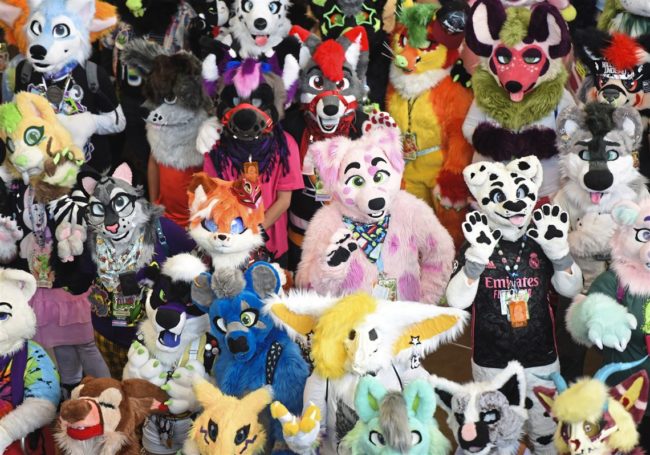 “Furries” in their native convention habitat.

Ever since Republican gubernatorial candidate Heidi Ganahl introduced the issue of students “identifying as cats” as a campaign theme, later clarifying to Colorado Public Radio that a school play about “a raven that does a sex-change operation” was one of the events that motivated Ganahl to run for office, we’ve been watching for Ganahl’s campaign to come to their senses and realize that they were shredding the last of already severely strained credibility on a long-discredited urban myth that periodically resurfaces in conservative social media around the country whenever there’s not another more pressing false moral panic to address.

Polling earlier this month from Global Strategy Group revealed that the public finds Ganahl’s obsession with furries to be overwhelmingly ridiculous, with just 17% of those polled agreeing that furries are a “widespread movement.” 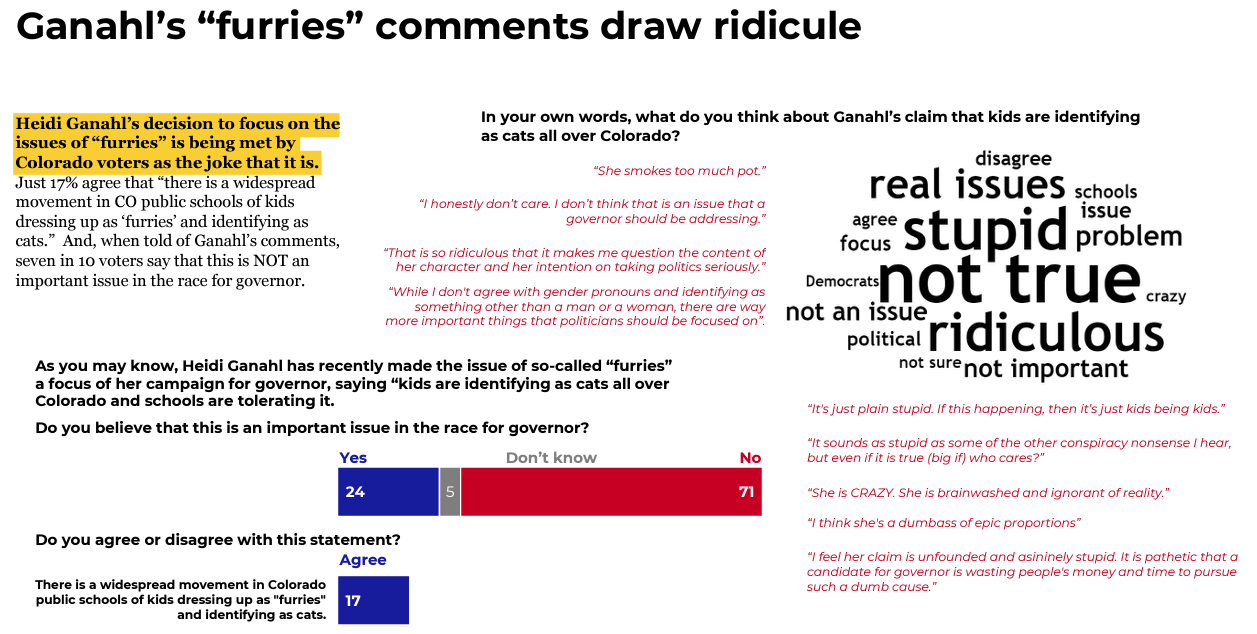 Ganahl taking up the anti-furry cause has correlated with continued declining poll numbers, with the latest 538 poll average showing Ganahl losing by 15.4%. It’s clear that Ganahl’s war on the furries has compounded Ganahl’s already unfolding political disaster, and the only reason it’s not a bigger story is that most responsible observers have written her campaign off.

In Colorado, the 2022 edition of the “furries invading the schools” myth was generated by a Jefferson County-based conservative parents group call Jeffco Kids First. We wrote earlier this month about this campaign asking parents to gather “evidence” of furries disrupting the academic environment, which produced another round of complete hearsay including the particularly egregious myth about “litterboxes in schools”–the truth behind that sidenote being the existence of buckets of little for use during mass shooting lockdowns. School administrators have responded that dress codes do not allow for kids to go to school in furry costumes and that there is no actual furry menace in Colorado schools–the exact same conclusion reached across the country every time the “furry panic” has swept through. In the weeks since, Ganahl has had plenty of chances to stop talking about furries, and she has declined them all.

Then this weekend, Ganahl called in what may be her last chit: CBS4 political “reporter” Shaun Boyd, for years the go-to reporter for Colorado Republicans looking for a friendly story without annoying follow-up questions. In a segment broadcast this weekend being shared by Ganahl’s campaign but does not so far as we can find appear on CBS4’s website, Boyd attempts to reanimate the “furry panic” and defend Ganahl despite the discredit being heaped on Ganahl by every responsible news outlet:

This isn’t the first time Shaun Boyd has embarrassed herself and her outlet by repeating Republican myths that turn out to be entirely baseless or contrived. A few months ago, Boyd tried to help Joe O’Dea’s campaign manufacture a story about a business partner’s address appearing on a mailer, only to broadcast the address repeatedly in the same segment. In September of 2020, Boyd’s bosses at CBS4 were forced to take down a story from Boyd falsely suggesting that dead voters were on the state’s voter rolls. This latest effort attempting to back Ganahl up on the “furry panic,” which contains absolutely no new information and relies on the same second-hand and anonymous “reports” gathered by Jeffco Kids First, is one of the few ways in which Boyd could outdo her previous disgraces.

And one more time we must ask: how does continuing to talk about “furries” help Heidi Ganahl?

That’s the part we can’t understand. Boyd thought she was doing Ganahl a favor.