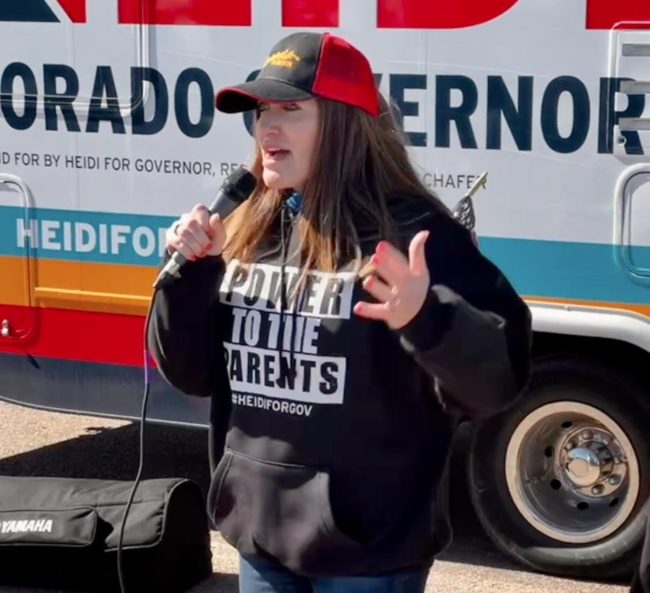 Colorado Public Radio’s Andrew Kenney has a new in-depth story today examining Colorado Republican gubernatorial nominee Heidi Ganahl’s strange turn in the closing weeks of her quixotic train wreck of a campaign toward conspiracy theories about so-called “furries” rampaging unchecked in Colorado public schools. Kenney’s examination of Ganahl’s bizarre endgame seeks to answer an honest question: is Ganahl just playacting in order to appeal to the fact-challenged Republican base, or does Ganahl actually believe the crazy stuff that comes out of her mouth?

As we’ve suspected from the beginning and Ganahl herself keeps proving, it’s the latter:

On the campaign trail, Ganahl’s staff wear T-shirts that proclaim, “Power To The Parents,” and she’s drawn support from fast-growing online groups of thousands of parents — a critical asset in a race where she lags badly in campaign spending and polling.

Recently, her embrace of the movement led Ganahl into one of the strangest news cycles of any Colorado campaign this year. She claimed on a conservative radio show last month that children are “identifying as cats … all over Colorado” and schools are “tolerating” it…

The whole episode has become a late-season laughingstock for some on social media. But cat ears and fuzzy tails are only the latest permutation of a narrative that has threaded through Ganahl’s political career.

Challenging public schools has for decades been a priority for conservatives like Ganahl, who argues that parents should be allowed to use public education funding to attend private religious institutions. And the movement’s been supercharged in recent years as new fronts have opened in the nation’s long-running culture wars. 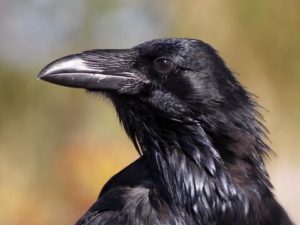 Although Ganahl’s defenders have tried desperately to fill the gap between these breathless allegations and reality with anecdotal, generally anonymous hearsay, As Kenney reports, Ganahl doesn’t need evidence for a problem she believes to have seen herself in her own kid’s elementary school:

Asked later about her specific concerns in classrooms, Ganahl turned to a personal example she’s mentioned several times on the trail.

As you can probably already guess, the play Ganahl is referring to does not depict or refer to a “sex-change operation,” or any medical procedure whatsoever. Because that would be wildly age-inappropriate (and also very stupid):

A recording of a performance of the play contains no references to a “sex change,” despite Ganahl’s recollection. Instead, the main character is misidentified as a girl raven until the other animals learn to see his true self. At one point, “Dr. Squirrel” revives the ailing bird with drops of water.

Despite Ganahl apparently having a very different recollection of this 2018 play than anyone else including the authors and actors, “Raven’s True Self” is according to Ganahl herself the reason for her campaign for governor. Not merely a reason, mind you–the reason:

The school district’s handling of the incident and its fallout “is actually why I’m sitting here, why I’m running,” Ganahl said at a recent forum with supporters in Jeffco.

After winning the Republican primary on June 28th, conventional wisdom expected Ganahl to join other Republicans in pivoting to the center after being forced to damagingly prove their conservative bonafide to Republican base voters. To the surprise of many observers who had to rewrite their prior narrative of “moderates” winning the Colorado GOP primary, Ganahl never even tried to pivot to appeal to a general election audience, continuing to associate herself with the far-right national ideologues who came to her rescue during the primary–and the choosing as her running mate a candidate best known for his conspiracy theorizing about the 2020 presidential elections.

Then came the “furry panic,” a completely self-inflicted descent into ridicule in which loyalists tried to give Ganahl countless offramps to change the subject that Ganahl steadfastly refused to take. The reason is now coming into focus: Ganahl never wanted to change the subject. Ganahl is a creature of the laughable right-wing moral panic politics that have consumed her campaign in the final weeks.

Heidi Ganahl is not faking her fringe politics. And the GOP insiders who backed her either missed it or wanted it.

Either way, a lot of “smart” Republicans should question their own judgment rigorously when this campaign is over.