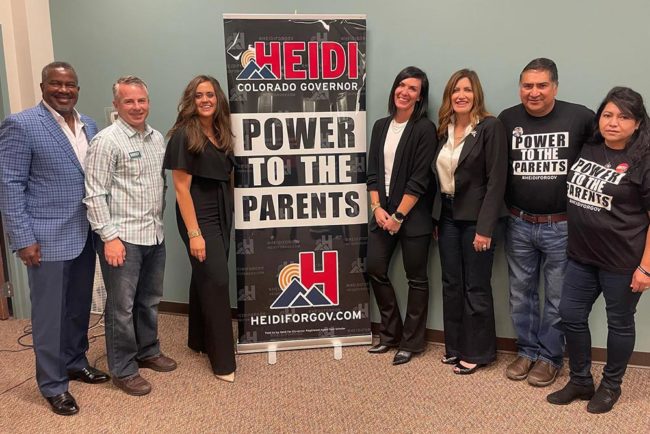 Republican gubernatorial candidate Heidi Ganahl spent much of the last 10 days obsessing about a mythical problem of “furries” in classrooms across Colorado, in the process turning her campaign radioactive and cementing her reputation as a complete lunatic who shouldn’t be anywhere the levers of government.

Ganahl has recently backed away from Furry-Lago after she went so far as to claim that she and her campaign were collecting photos of children in schools across the state and distributing those pictures to media outlets as proof of her widely-debunked theory. These claims turned her furry obsession from weird to a legitimate public safety concern, with other news outlets documenting the very real harm that can result in publicly attacking kids for trying to be at all different than others.

To be clear, there remains absolutely NO EVIDENCE that children are wearing animal costumes inside of schools, but it wasn’t for a lack of trying on behalf of Ganahl’s campaign and a group of supporters called “Ganahl’s Gals.”

Over the summer, the members of a Facebook group called Jeffco Kids First began shifting their concern away from pandemic policies in schools to identities it deemed disruptive to learning. A leading voice in the group told parents to empower their children to find “furries,” kids who dress up in animal accessories, and to record them.

“If any of your kids would be willing to record anonymous audio of their experiences with furries hissing, barking, clawing, chasing, and how it affects their school day, please send to me or let me know ASAP!” Jeffco Kids First creator Lindsay Datko, a parent in Jefferson County Public Schools, posted.

Details like these have not been widely publicized because the Facebook group is private, meaning only members can see what is posted. After being denied entry to the group, Colorado Community Media gained access through a member who wanted the group’s content to be public.

School officials say the group’s activities can be disruptive and harmful to kids. But it has some strong backers, including Heidi Ganahl, the Republican Party’s nominee in this fall’s Colorado gubernatorial race. She’s also a member of the group.

“Boy, Jeffco Kids First has been such an impactful and amazing community, and I’ve gotten to know a lot of you over the past couple of years,” Ganahl said in a post in Jeffco Kids First. “You are warriors fighting for our kids every day in the classroom and in school. I want to be a voice for all of you.” [Pols emphasis] 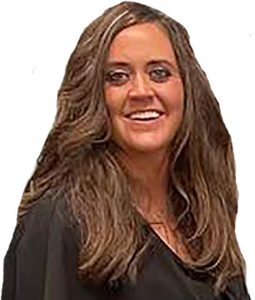 Lindsay Datko, founder of “Jeffco Kids First” and a member of “Ganahl’s Gals.”

As Dunn reports, it was “Jeffco Kids First” founder Lindsay Datko who apparently helped convince Ganahl that it was a good idea to start talking about “furries” invading Colorado schools. Datko is a longtime Ganahl supporter and a member of “Ganahl’s Gals,” one of dozens of different subgroups that the Ganahl for Governor campaign often promotes.

“The media is trying to spin this,” Datko wrote in the post.

A member of the group posted an additional suggestion: “go on tiktok and use the keywords furries and Colorado school.”

A Colorado Community Media search of TikTok found numerous posts where purported students in the state recorded videos of classmates, who seemed unaware they were being filmed dressed in costumes and accessories. Some posts contained threats against the students being filmed. [Pols emphasis]

One post of a student apparently filmed without their knowledge contained the hashtag “#killfurrys.” Other posts harshly mocked the students.

This is the “call to action” that Datko wrote on her “Jeffco Kids First” Facebook group: 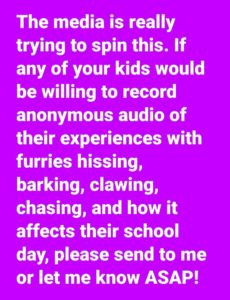 The entire Colorado Community Media story is well worth the read. It offers some new insight into the sort of lunatic fringe voices that Ganahl has surrounded herself with during her campaign for Governor.

Datko epitomizes the nutjob right-wing base that Donald Trump pandered to in order to win the 2016 Presidential election. Ganahl seems to have taken that playbook to a new level, however; she didn’t just seek Datko’s support but actively considered her counsel.