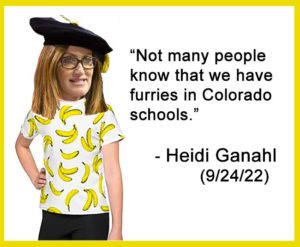 We’re several news cycles into Heidi Ganahl’s latest bout of race-derailing wackiness, determining that the best way to boost her sinking campaign is to open a new front against the peril of “furries”–claiming without any factual basis that a subculture of students “identifying as cats” are disrupting learning for kids across the state.

After the initial shock of realizing that yes, we’re talking about “furries” as if it’s a real problem, local media dutifully contacted local school districts to determine if there was even anecdotal evidence to support Ganahl’s allegations. And just like other states where conservative “furry panic” has swept through this year, as the Denver Post’s Seth Klamann reports, there’s no evidence to support any of it:

No, several large Colorado school districts said Tuesday, they are not having issues with students identifying as cats or other animals, as Republican gubernatorial candidate Heidi Ganahl has repeatedly claimed is happening in schools across the state.

Ganahl, a University of Colorado regent running to unseat Gov. Jared Polis next month, said in a radio interview last week that “schools are tolerating” students “identifying as cats.” She then doubled down on that position in subsequent interviews over the past several days: She told Fox31 that she’d received more than 100 messages from parents “across Colorado” talking about the issue in their school.

As for the claim that schools keep litterboxes on hand for use by students “who identify as cats?” The truth of that false allegation is even worse for Ganahl and Republicans who have done little to nothing to reduce the threat of gun violence in schools:

There *are* bins with kitty litter in Jeffco Schools classrooms. They’re for students to relieve themselves if kids are trapped in the classroom during a mass shooting or lockdown. Our report from 2017: https://t.co/fc2TTZ2bPC

You would think that after over a week of being lampooned by local and increasingly national media, Ganahl would want to talk about something else. Anything else. After all, Ganahl’s defenders have insisted that this entire controversy was the result of hostile media “hyping” Ganahl’s supposedly “offhand remark” about furries on an AM radio show.

But you’d be wrong.

Ganahl reiterated her concern in a statement to the Denver Post on Tuesday, casting students dressing up like cats as a distraction when they should be learning. [Pols emphasis]

“As a candidate for governor, but more than anything as a parent, my concern is that distractions like children dressing up in costumes at school detract from the reality that 60% of our kids are not performing at grade level,” she said. “It’s tragic that we are failing our children. We need to make them our priority.”

It’s very simple. If you don’t want to talk about “furries,” don’t talk about “furries.”  Just move on. Ganahl’s defenders have been trying to do that for over a week by blaming the media for covering this story that Ganahl manufactured for herself.

But Heidi Ganahl wants to talk about “furries.” Either that, or she doesn’t know how to stop….and it’s destroying whatever was left of her reputation. Again, from the Post:

The claims are “exhausting” for educators, said Bret Miles, the executive director of the Colorado Association of School Executives. His group, along with the Colorado Education Association, described the claims as false. Both groups said no educator, administrator or district had ever reported issues similar to Ganahl’s claims.

“Our educators have been so focused on having a normal school year going through, we’re focused on all of that lost time that kids had over the last few years, and here we are,” Miles said. “School districts are spending time chasing down storylines that were purely for political gain. They have nothing to do with what kids are experiencing at school, and it’s shock and awe. It’s just incredibly frustrating.”…[Pols emphasis]

…He said the claim is part of a broader effort to politicize what’s happening in the classroom and is contributing to burnout and exhaustion among educators. He said that teachers are dealing with a battery of other issues that deserve attention.

Ganahl went from a candidate who talked a lot about her desire to “help” children and schools in Colorado to being someone who is actively causing more harm.

Throughout her campaign for governor, Ganahl, unlike other Republicans who have tried to pivot away from the freakshow politics that dominate GOP primaries, has instead embraced the far right at every step both before and after securing her nomination. From the “furry panic” to Ganahl’s election denier running mate, Ganahl is without question the most committed right-wing ideologue on the statewide Colorado ballot in 2022. The result of Ganahl’s inability to change course is reflected in her seventeen-point deficit in polling relative to Joe O’Dea’s ten percent.

It’s the disaster anyone could have predicted a year ago–which we did.