In the last couple of weeks since Republican gubernatorial nominee Heidi Ganahl decided entirely of her own volition to make a costume subculture (what’s known as “cosplay”) called “furries” the central moral panic driving her campaign, Ganahl has been brutally lampooned for recycling a widely-spread and debunked conservative conspiracy theory suggesting that children are (note the loaded language) “identifying as animals.” 9NEWS’ Kyle Clark compiled a Twitter thread of examples of similar “furry panic” from Republicans around the country including Rep. Marjorie Taylor Greene and Minnesota’s Republican candidate for governor–each instance debunked, but instead of fading away simply finding new geography in which to spread.

Although the general response to Ganahl’s inexplicable doubling down on this ludicrous distraction with just a few weeks left in her stumbling campaign for governor has been laughter and even some amount of pity, there’s a darker side to Ganahl’s crusade to demonize the “furries” that bears (no pun intended) some examination. As Slate reported in May in their own examination of the GOP’s 2022 “furry panic,” the real purpose here is delegitimizing LGBTQ+ people as a class:

Furries are not people who think they are animals. [Pols emphasis] They are broadly recognized as people with varying degrees of aesthetic interest in anthropomorphic animals or characters. Sometimes they draw original artworks of popular cartoon animals like Bugs Bunny and Star Fox. Sometimes they dress up in full costumes (known as “fursuits”), designed to look like anthropomorphic characters they’ve imagined. And there are furry conventions where such enthusiasts gather in various cities to meet other members of the community whom they’ve only met online, buy art works, and fundraise for charities, among other activities.

Kameron Dunn, a furries expert and researcher who’s previously written about these subcultures for Slate, explained that there’s a common misconception “that furries pretend to be animals” because of sick sexual fetishes. But that in reality, furrydom is about imagination and community, not transformation: “It’s through this aesthetic interest that they’re able to endeavor on role-play, and join nerdy communities to express that creativity,” he said.

The current misrepresentation of furries—that they simply want to be animals and are sexual deviants—dates back decades. Both Dunn and Joe Strike, another furry historian and community member, recalled an infamous 2003 episode of CSI that, in the words of another furry documentarian, “portrayed the community as a community of sexual deviants who like to have sex in fur costumes,” despite the fact that such fetishists “probably represent about 2 percent of the fandom.” 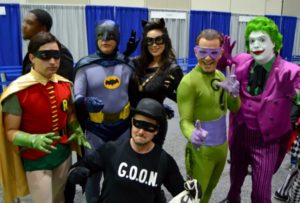 Although we’re not personally in the demographic that attends cosplay conventions, be they about superheroes or pirates or cartoon characters or historical re-enactors, we can’t deny there’s a robust culture (not to mention industry) who avidly pursues this stuff as a hobby, and have for many years. It’s only in 2022 with conservatives in a generalized state of panic about what they see as society’s imminent collapse that “furry” cosplayers are being hauled in front of the court of public opinion for their turn as scapegoats in the ongoing political culture wars.

None of which works unless you grossly exaggerate what’s happening from harmless cosplay into people “identifying as animals,” a statement engineered to denigrate transgender people. Are the kids who dress up like Superman at the yearly comic book conventions “identifying as Superman?” Does dressing up like Bugs Bunny mean you literally think you’re Bugs Bunny? Of course not.

In an insightful story everyone who has spent a moment of time on Ganahl’s “furry panic” should read, Denver7’s Colette Bordelon spoke with a young person directly in the path of Ganahl’s coded appeal to prejudice, who reminded us that what she’s doing has actual victims: kids in schools.

“I know exactly where she got this claim because I saw it, and it was on an anti-LGBTQ post on Reddit. And I saw this post, and I was like, ‘oh my God, this is the stupidest thing ever,'” Johnson said, after showing several similar posts on the website. “I am honestly at a loss for words because she’s using something that is fake, and she’s twisting what reality is so that she can target LGBTQ kids.” [Pols emphasis]

Johnson called the assertions misinformation, and said they attack the legitimacy of children who identify as LGBTQ+.

“It’s targeting my community because they’re spreading lies about us and making us unsafe, and that’s frightening to me,” Johnson said. “We are already so discriminated against, we’re questioned on a daily basis just by identifying as who we are, and to not be safe in that is life-threatening.”

Underneath the veneer of absurdity, for which Ganahl is rightly being ridiculed, there’s something actually quite troubling. It tells us how Heidi Ganahl thinks about much more than “furries.” Ganahl’s false equivalence between cosplay and gender transition by suggesting that people who engage in “furry” cosplay are “identifying as animals,” taken in its full context, is essentially saying that gender transition is like putting on a costume. If that’s not a slur against the rights of every LGBTQ+ American, we can’t tell you what is. Everywhere Heidi Ganahl looks, be it the hallways of our public schools or walking the streets of downtown Denver in broad daylight, Ganahl sees otherness to be afraid of.