Colorado Republicans have been telegraphing their fear about the abortion issue sinking their hopes in 2022 — as well they should — and a new ad from Sen. Michael Bennet drives this point home further.

We’ll have more on that in a moment, but first…lest there be any confusion on the subject, former militia leader and current State Republican Party Chair Kristi Burton Brown today punctured any Republican candidate’s hopes of continuing to dance around the topic of abortion:

This will probably cause no small amount of heartburn in GOP campaign offices around the state today. Meanwhile, Jesse Paul of The Colorado Sun reports on Bennet’s new TV spot highlighting the fact that there is a very clear choice between the U.S. Senate candidates when it comes to abortion rights:

The ad, which will run for two weeks across the state, is Bennet’s first one attacking O’Dea. It’s an opening offensive that signals he plans to make abortion access, in the wake of Roe v. Wade being overturned in June after nearly five decades, a key pillar of his 2022 reelection campaign.

Democrats up and down the ballot in Colorado this year, from the attorney general’s contest to the highly competitive new 8th Congressional District to legislative races that will decide which party controls the state Capitol, are running on a promise to protect abortion access.

Paul writes that this new Bennet ad is a reminder of U.S. Sen. Mark Udall’s 2014 campaign that highlighted then-U.S. Rep. Cory Gardner’s opposition to abortion. There are certainly some similarities with the 2014 Senate race in Colorado, but most importantly is the lesson that all Coloradans learned from not taking Udall’s warnings seriously. The editorial board of The Denver Post infamously endorsed Gardner in 2014, with one particular paragraph that will not soon be forgotten:

[Gardner’s] past views on same-sex marriage are becoming irrelevant now that the Supreme Court has let appeals court rulings stand and marriage equality appears unstoppable. And contrary to Udall’s tedious refrain, Gardner’s election would pose no threat to abortion rights.

The Post editorial board memorably rescinded their Gardner endorsement in March 2019 after it had become painfully clear that Gardner did not actually stand for any of the things he campaigned about five years earlier. To be clear, Gardner was open about his opposition to abortion; he just avoided the subject by claiming that it was “settled law” in the United States. As the Supreme Court’s June decision on the Dobbs v. Jackson case that essentially overturned Roe v. Wade confirmed, the threat to abortion rights was very real (and now, so is the threat to same-sex and interracial marriage). 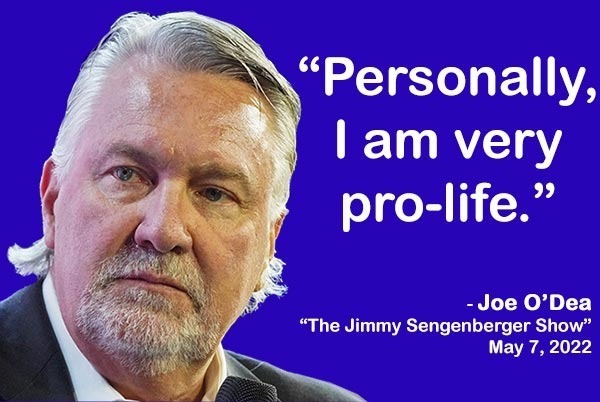 As Paul continues for the Sun:

While Gardner’s abortion opposition was fairly clear, O’Dea, who was panned by some Republicans during the U.S. Senate primary for being too weak on the issue, has left some notable gaps in his stance.

“It has something to do with viability,” O’Dea, who opposed Roe v. Wade being overturned, said during a Sun debate when pressed on his position. “I don’t believe that I get to weigh in on that.”

O’Dea can try to pirouette around the issue all he wants. The truth is that there are only two comments from the Republican Senate nominee that really matter: 1) O’Dea has said “Personally, I’m very pro-life”, and 2) O’Dea says that he would have supported all of the recent Supreme Court nominees put forward by former President Donald Trump that paved the road to ending Roe v. Wade.

Bennet supports legislation prohibiting government restrictions on abortion access, including the Women’s Health Protection Act. In addition to those two key comments above, O’Dea also opposes the Reproductive Health Equity Act (RHEA) in Colorado. As Bennet’s new ad points out, if you are a Colorado voter concerned about protecting abortion rights, there is no debate over which candidate you should support for U.S. Senate.

“I’ve been very transparent, very open about my position on abortion. It’s a settled question in this state.”

And it’s not just the U.S. Senate race where this distinction is clear. Republican candidates for Congress in CO-07 (Erik Aadland) and CO-08 (Barbara Kirkmeyer) have been unambiguous about their opposition to abortion rights. Attorney General hopeful John Kellner has been somewhat more opaque, though he has stated publicly that he thinks the Supreme Court got it right in the Dobbs decision.

Knowing that this position is a political problem for her, Kirkmeyer has even tried her own version of a Cory Gardner response. Again, via The Colorado Sun:

“I’ve been very transparent, very open about my position on abortion,” Kirkmeyer said. “It’s a settled question in this state, so I don’t know why they want to keep bringing it back up other than for political reasons. People know who I am.”

As Colorado learned from Gardner, abortion is a “settled question” only until it isn’t.