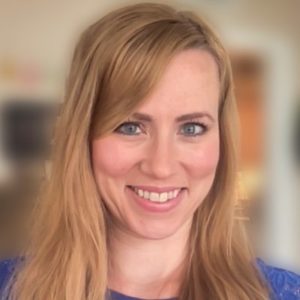 The Colorado Republican Party is well aware that the abortion rights issue is going to sink many of its candidates in 2022. Democrats continue to pick up ground in recent polling, in large part because overturning Roe v. Wade has pushed abortion rights to the top of the list of concerns for voters across the country.

Republican candidates up and down the ballot are on the record as being anti-choice, from Heidi Ganahl (Governor) and John Kellner (Attorney General) to Congressional hopefuls Erik Aadland (CO-07) and Barbara Kirkmeyer (CO-08). The GOP nominee for U.S. Senate, Joe O’Dea, has been spinning his wheels for months on the issue after acknowledging that “personally, I am very pro-life.” Smart Republicans are doing everything they can to muddy the waters on abortion; just this week, former State GOP Chair Dick Wadhams was falsely telling The Denver Post that Kirkmeyer was not an “activist on abortion” despite her long record of working on anti-choice issues.

Republicans who are not as smart are trying their own dumb spin on the issue. Today the Colorado Republican Party issued a very weird press release about a new endorsement for Democratic Sen. Michael Bennet that demonstrates again just how terrified they are about the abortion issue: 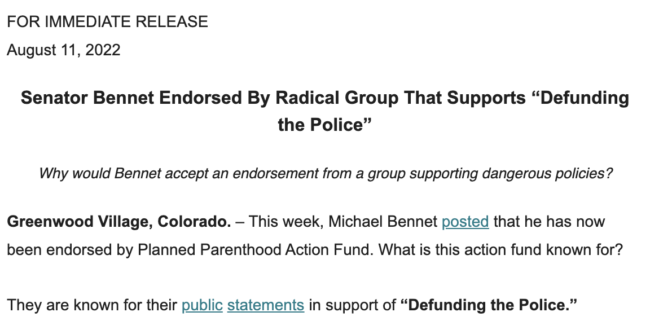 Via the Colorado Republican Party

The Colorado GOP is attacking Bennet’s endorsement from Planned Parenthood Action Fund by claiming that the group is “known for their public statements in support of ‘Defunding the Police.'”

Really? THAT’S what Planned Parenthood is known for?

Republicans are so frightened of the abortion issue that the State Party issued a 300-word press release about Planned Parenthood that literally never mentions the word “abortion” (click here to read the entire press release). Not once.

It’s true that Planned Parenthood Action Fund has supported efforts that were unfortunately labeled as “Defund the Police,” but it’s silly to claim that this is what the group is “known for.” That’s like saying the Colorado GOP is known to support domestic terrorism…no, wait, that’s a bad example.

This is like saying the National Rifle Association is known for its support of school vouchers. We don’t actually know if the NRA has backed school vouchers on a regular basis, but the point is that NOBODY thinks about the NRA as anything but a gun rights organization. Likewise, NOBODY thinks of Planned Parenthood as anything other than a group dedicated to providing reproductive health care and protecting abortion rights.

For some reason, this press release also makes sure to point out that Democrats Jason Crow, Brittany Pettersen, and Yadira Caraveo also have the backing of Planned Parenthood Action Fund. Why Colorado Republicans are helping to spread the word on this is not a question we can adequately answer.

It’s amusing that the Colorado GOP thinks this too clever by half “defund the police” spin is going to work on anyone who isn’t named Dan Caplis. If Republicans don’t want to talk about the fact that a pro-choice organization is backing Democratic candidates, they’d have been better off just not mentioning it altogether.