Joe O’Dea is More Right-Wing than Most Colorado Voters 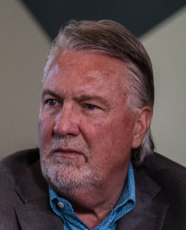 When the ‘Omicron’ variant of COVID-19 was dominating headlines earlier this year, it was often described by experts and media outlets as being a more contagious but generally less severe form of the virus compared with the earlier ‘Delta’ variant. Some even said that ‘Omicron’ was more “moderate” than ‘Delta.’

Still…nobody wanted to get infected with COVID-19.

The outcomes in this week’s Primary Elections had a similar flavor. Republican gubernatorial nominee Heidi Ganahl and Senate nominee Joe O’Dea were often discussed as the more “moderate” candidates in their respective races. This is only true in a relative sense; it would have been tough to have been further to the right than Greg Lopez and Ron Hanks, respectively.

As Meghan Lopez of Denver7 reports, Republicans are trying to brush aside everything that happened before June 28th:

“I think in the case of both Heidi and Joe O’Dea, they can, you know, for lack of a better term, drop the act,” Republican strategist Ryan Lynch said. “We can drop the conspiracy theories, and we can focus on what’s real and what’s actually impacting Coloradans.”

But it’s hard to “drop the act” when the candidates actually believe many of their right-wing statements:

Democrat strategist Jason Bane, however, warned that this doesn’t mean the candidates who made it past the primary are necessarily moderates.

We noted on Wednesday that Ganahl tacked HARD to the right in the last week of the Primary campaign, sending out campaign materials claiming that she was “the MAGA candidate Colorado has been waiting for.” O’Dea took a similar approach in touting his support from Donald Trump acolytes: 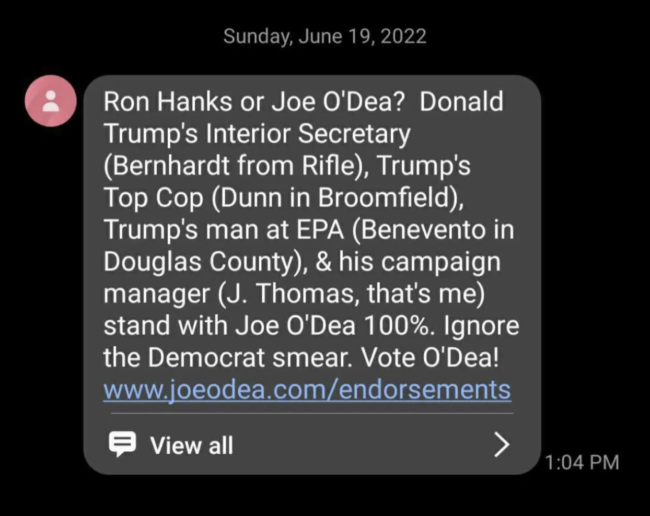 While the word “moderate” was thrown around too freely in some publications, Mike DeBonis of The Washington Post used the correct qualifier in discussing O’Dea’s candidacy:

In a year where Republican primary voters across America have taken a hard right turn toward former president Donald Trump, GOP voters in Colorado made a different choice Tuesday — nominating for the Senate a relatively moderate businessman, Joe O’Dea, [Pols emphasis] who has rejected Trump’s claims of election fraud, ruled out repealing the Affordable Care Act and offered a limited embrace of abortion rights.

O’Dea has sketched out a nuanced stance in recent debates and media appearances, saying he supports abortion rights “early in the pregnancy” and exceptions otherwise for cases of rape and incest or to save the life of the mother. But he has not sketched out where exactly in gestation he would draw the line of legality, and he has also voiced support for restricting government spending on abortions and requiring parental notification for minors…

…O’Dea has indicated that he would have voted to confirm the same justices that [former Sen. Cory] Gardner voted to confirm, [Pols emphasis] and he has declined to endorse a Colorado state law ensuring abortion rights, as well as a Democratic bill in Congress that would codify in federal law the constitutional rights that the Supreme Court overturned last week.

O’Dea may dance around with his position on abortion rights, making it hard to stick him with a particular label on this issue. But O’Dea has made it abundantly clear that he would have supported all of the recent Supreme Court nominees who made it possible for SCOTUS to overturn Roe v. Wade, weaken gun control policies, and march toward new challenges to contraception availability and LGBTQ rights. In other words, O’Dea’s exact position on many key issues is less important when you understand that he would have held open the door for the exact same SCOTUS decisions we’ve seen in recent weeks.

Lest there be any confusion, this is from O’Dea’s own campaign website:

Just today, SCOTUS issued another ruling that ignores the consensus opinion of most Americans on combating Climate Change. From The New York Times:

The Supreme Court on Thursday limited the Environmental Protection Agency’s ability to regulate carbon emissions from power plants, dealing a blow to the Biden administration’s efforts to address climate change.

The vote was 6 to 3, with the court’s three liberal justices in dissent, saying that the majority had stripped the E.P.A. of “the power to respond to the most pressing environmental challenge of our time.”

Colorado Sen. John Hickenlooper was one of many elected officials to voice dismay with the latest SCOTUS decision, but this is right up O’Dea’s alley:

Based on characterizations of his position by other outlets, I’ve been giving Joe O’Dea too much credit on climate change.

This, from a @DenverChannel interview last week, is not just hedging or obfuscation, it’s straight-up flat-earth climate denial. pic.twitter.com/HrR6Ci0tEh

Compared to someone like Ron Hanks, most people would be considered “relatively moderate.” The true comparison, however, is about where O’Dea and Democrat Michael Bennet stand on issues in relation to the majority of Colorado voters.

By that standard, O’Dea has more in common with Hanks than he does Bennet.