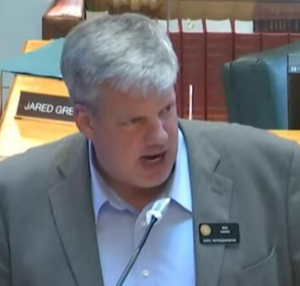 Chase Woodruff of Colorado Newsline reports this morning on an “emergency meeting” that took place last night in Castle Rock, organized by the militia-fortified conservative activist group FEC United. Last night’s meeting featured a number of Colorado Republicans who, like a majority of the Republican rank-and-file, believe as an article of faith–faith being necessary due to the complete lack of evidence–that the 2020 presidential election was stolen from Donald Trump.

Fresh from turning herself in on obstruction charges as the multi-agency investigation into her alleged misconduct, tampering with election equipment, and possible wire fraud grinds on, Mesa County Clerk Tina Peters defended her behavior this week, which allegedly included playing keep-away with an iPad wanted by investigators followed by trying to kick uniformed cops called to intervene:

Peters arrived at Friday’s event, held at The Rock Church, to a standing ovation from the assembled crowd. She said she was still dressed in the same clothes she wore when she turned herself in to be booked on misdemeanor charges of obstructing a peace officer and obstructing government operations at the Mesa County Sheriff’s Office earlier on Thursday.

“When you do the right thing, you don’t have to be ashamed,” said Peters, who was seen to attempt to kick a police officer in a video of the Feb. 8 incident. “I won’t back down. They don’t like that.” [Pols emphasis]

We’ll agree that cops do not generally appreciate being kicked–though like we said yesterday, it’s likely that this misdemeanor charge will be the lesser of Peters’ legal troubles soon enough. Moving on to U.S. Senate and 2020 election denier with extreme prejudice candidate Ron Hanks:

Hanks drew cheers when he boasted to the crowd Thursday of going “to the Capitol” on Jan. 6, 2020. The first-term state lawmaker launched his Senate challenge against incumbent Democratic Sen. Michael Bennet with a video ad featuring the explosion of a simulated Dominion voting machine.

Polling has consistently shown that more than three-quarters of Republican voters continue to believe the “big lie” that the 2020 election was stolen from Trump. Hanks, who won two early straw polls in a crowded field of GOP Senate candidates, said that his campaign is gaining “remarkable” momentum.

“I’m the only Senate candidate talking about election integrity,” Hanks said. “And the reality is, that’s what people want to talk about.” [Pols emphasis]

Hanks, who once predicted “foreign intelligence” would stop Joe Biden from taking office and that the failed Arizona audit would prove “Trump won” right up to the moment it didn’t, also reportedly has a slate of so-called “election reform bills” ready for 2023 in the Colorado legislature in the event Republicans retake the majority. Never mind that Rep. Hanks will almost certainly not himself be serving in the Colorado House in 2023:

Hanks said he’s prepared election-related bills for Colorado Republicans to pass once they capture the statehouse majority. “We will prepare the battle space for the next session,” Hanks said. “When we hit the majority, they can pull these bills out of archive.”

Joining Clerk Peters and Rep. Ron Hanks for we think is the first time ever for all three on the same stage was none other than John Eastman, the former CU “conservative affirmative action” professor and attorney who wrote the plan to overturn the 2020 elections that was thankfully rejected by Vice President Mike Pence–and has two-facedly defended and condemned his plan since then depending on the audience:

Eastman decried the “attacks” that he and others in the election-conspiracist movement have experienced, and told the crowd that they are facing “pure evil.” He again raised the oft-discussed possibility of a legal challenge to Colorado’s open-primary law, which allows unaffiliated voters to choose to vote in either party’s primary election. Eastman solicited donations to a legal fund that will bankroll the case and said the lawsuit would be filed “next week.”

The open-primary law, Eastman said, “is guaranteed to let the establishment control who the party nominates, and prevent you all from taking back control of your destiny.”

The question of whether unaffiliated voters should be allowed to participate in a Republican primary as Colorado law provides for today is vexatious within the GOP, who put down an attempt to opt-out through procedural means last fall. If Eastman were to prevail in a lawsuit to exclude unaffiliated voters, the result could be life-saving for far-right candidates from the legislature to Lauren Boebert. Eastman’s continued meddling in Colorado politics even after losing his teaching responsibilities at CU for his role in the January 6th coup plot means he’s a continuing headache for Colorado Republicans–especially gubernatorial candidate Heidi Ganahl, one of Eastman’s stoutest defenders until she decided questions about 2020 were too divisive to answer.

Finally, we are obliged to note that this “emergency meeting” featured another round of death threats against Gov. Jared Polis and Secretary of State Jena Griswold–perhaps vague enough to not be actionable, but unmistakable in their intent:

Just before Peters’ arrival, prominent election conspiracist Shawn Smith — who works with the U.S. Election Integrity Plan and is an ally of MyPillow CEO Mike Lindell — rallied the crowd against Colorado Secretary of State Jena Griswold, whom he accused of being complicit in election fraud.

As the crowd chanted “Lock her up,” Smith said that he believed in “due process” and “justice.”

“I think if you’re involved in election fraud, then you deserve to hang,” he said to applause and shouts of agreement from the crowd. “Sometimes the old ways are the best ways.

“I’m not endorsing violence, I’m saying when you put your hand on a hot stove, you get burned,” Smith continued. “And you ought to see it coming. That’s what happens to tyrants.”

Last night, elected Republicans were on stage at a church where one speaker called for the hanging of @JenaGriswold and another speaker has urged the execution of @GovofCO. This seems newsworthy but we shall see. Ignoring radicalization does not make it go away. #copolitics https://t.co/L3BSrVRgKM

There’s been debate in the legislature this past week about a request by Griswold’s office to provide additional security. Last night appears to have supplied some of the best justification yet for approving that request without delay.

Despite the profound difficulty Colorado Republican Party chairwoman Kristi Burton Brown has admitting it, doubly odd since she was once the leader of FEC United, the sentiments expressed last night are fully consistent with the views of a majority of Republicans. It’s impossible for Republicans to “move on” from 2020 when a majority of their own are determined to relitigate 2020 as many times as necessary until they get the outcome they want–President Trump restored to office by constitutional or other means. With the violence of January 6th, 2021 being recast as “legitimate political discourse,” it’s time to recognize that the rules have changed.