Everyone Should Know About the “Eastman Memo” 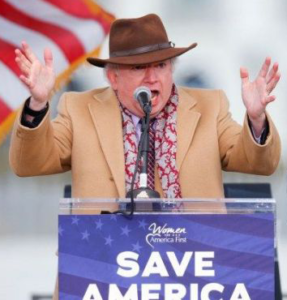 Margaret Sullivan has an important column out today in The Washington Post about something that every American should be intimately familiar with: The “Eastman Memo.”

In a normal world, the “Eastman memo” would be infamous by now, the way “Access Hollywood” became the popular shorthand in 2016 for the damning recording of Donald Trump’s bragging about groping women.

But it’s a good bet that most people have never even heard of the Eastman memo.

That says something troubling about how blasé the mainstream press has become about the attempted coup in the aftermath of the 2020 election — and how easily a coup could succeed next time.

The memo, unearthed in Bob Woodward and Robert Costa’s new book, is a stunner. Written by Trump legal adviser John Eastman — a serious Establishment Type with Federalist Society cred and a law school deanship under his belt — it offered Mike Pence, then in his final days as vice president, a detailed plan to declare the 2020 election invalid and give the presidency to Trump.

In other words, how to run a coup in six easy steps. [Pols emphasis]

For you followers of Colorado politics, the name John Eastman should ring a few bells. Eastman is a former visiting professor at the University of Colorado whose tenure was rife with controversy. The University of Colorado cancelled his classes in January, citing low interest from students, and stripped Eastman of his public duties ahead of the end of his contract in May. Eastman is now preparing to sue CU for millions of dollars, alleging defamation and a violation of his First Amendment rights (because CU was not exactly proud of his efforts to formulate a coup at the highest levels of government).

“There are fantastic folks who come in [to the Benson Center]. Right now, it’s Dr. John Eastman, who’s riling some folks up.”

Eastman’s ties to CU include being embraced by to Republican gubernatorial candidate Heidi Ganahl, who was a big supporter in her role as a CU Regent. Ganahl was heaping praise on Eastman as recently as December 2020.

Eastman was inserting himself into the 2020 election long before last November. This is the same guy who wrote an infamous (and incorrect) opinion piece last summer suggesting that Vice Presidential nominee Kamala Harris might be ineligible to serve as VP because her parents are immigrants.

As Sullivan writes in The Washington Post, the “Eastman Memo” has not received the type of media coverage that something this nefarious and important should deserve. Media outlets in Colorado have also avoided the story for some reason, but that could change as the 2022 election cycle heats up. Remember that Ganahl STILL HAS NOT PROVIDED AN ANSWER to multiple questions about whether she believes that the 2020 election was fraudulent; her persistent refusal to answer that question, coupled with her indisputable support of Eastman, should concern every voter in Colorado.

We’ll let Sullivan have the final word on why the “Eastman Memo” needs to be a household phrase: “Eastman’s coup hasn’t happened yet. But given the media’s shrug-off, maybe all we have to do is wait.”