Recall Polis-Griswold 2021 Deep-Sixed By The Zuckster?

Checking in on the website for what would be the third attempt since 2019 to recall Gov. Jared Polis with Secretary of State Jena Griswold thrown in this time because it’s all fantasy and why the hell not, we see that the countdown clock for starting their 60-day petition circulation campaign has ticked down to zero:

We should be on the edge of our seats!

Now, as was the case with Polis Recall 2019 and 2020’s “Polis Recall 2.0,” this is the golden period of opportunity for the Recall Polis-Griswold 2021 campaign to be furiously drumming up whatever buzz and earned media they can, in order to maximize any chance at achieving the goal the two prior campaigns couldn’t even get halfway to reaching: over 630,000 valid Colorado voter signatures needed to qualify a recall question for a future statewide election.

Instead, it looks like the Polis Recall campaign has a more basic problem on their hands: 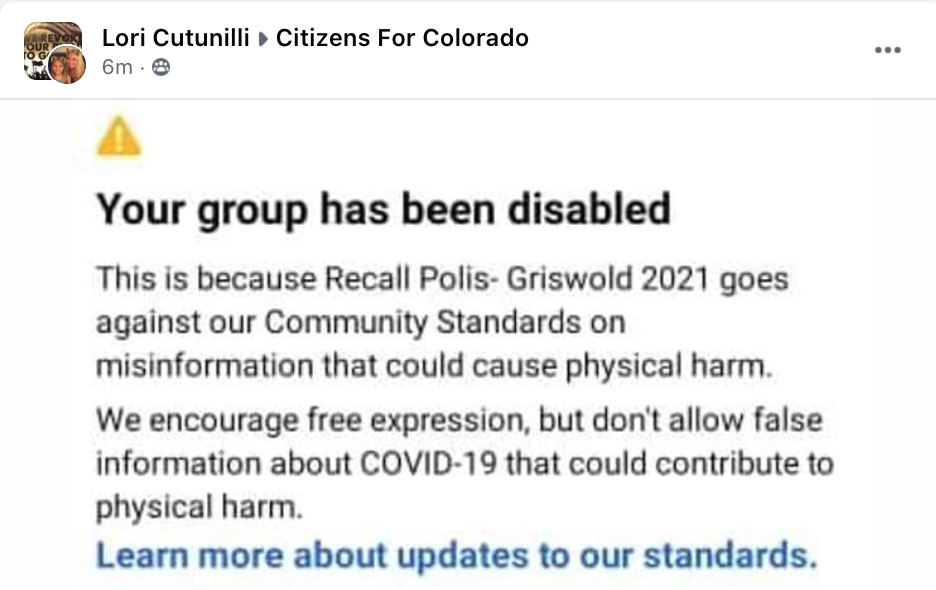 It would appear that somebody in the private Facebook group where recall organizing was to be taking place posted something stupid–we’re guessing they posted a lot of stupid things–about the COVID-19 pandemic that eventually brought the dreaded ball gag of Mark Zuckerberg down around the piehole of the Recall Polis-Griswold 2021 campaign on that platform. You would think by now most of these very fine people would have moved to Parler or Gab or whichever alternative network it is these days that allows people to lie about stuff without any consequences. That’s not Facebook anymore, and most people we know not named Ken Buck are pretty happy about that.

But to the extent the Recall Polis-Griswold 2021 campaign was relying on Facebook to organize, it’s back to square one! Perhaps they’ll see reason and just start getting ready for the next regular election in 2022, but we have no reason to expect rational behavior at this point. There’s neither fun nor grift in that.