Get More Smarter on Monday (June 14)

Happy Flag Day; please celebrate responsibly. Let’s Get More Smarter; if you think we missed something important, please include the link in the comments below (here’s a good example). If you are more of an audio learner, check out The Get More Smarter Podcast. And don’t forget to find us on Facebook and Twitter.

► As The Washington Post reports, Congress returns to session this week with the looming presence of a proposed deal on infrastructure legislation:

At the center of the debate is an infrastructure compromise brokered by 10 Senate Democrats and Republicans. The bloc, largely composed of moderates, now faces the new, tough task of selling their deal to both fellow lawmakers and the White House, just days after talks between President Biden and another group of GOP leaders reached a political impasse.

“We’re talking to folks, one by one, and just asking folks to be open,” said Sen. Mitt Romney (R-Utah) in advance of the new plan’s release.

Some Democrats already have expressed discomfort with the early details of the nearly $1 trillion, five-year package, arguing it should be bigger and more robust in scope. Republicans, meanwhile, signaled there may not be widespread support for it within their own party, either. And the White House said at the end of last week it has “questions” about lawmakers’ approach, as fresh concerns emerged over the potential changes to the gas tax that could help finance the new proposal.

But congressional Democrats have said they are not willing to wait much longer in courting Republicans. They’ve already started laying the groundwork to proceed on infrastructure potentially on their own, relying on a process known as reconciliation that might allow them to advance their favored fixes with only 51 votes, not the 60 that are typically required in the nearly deadlocked Senate.

► Colorado lawmakers passed 502 new pieces of legislation in the 2021 session. The Colorado Sun narrows down the list to 65 bills you should know about.

► Israel will have a new Prime Minister for the first time in 12 years.

In related news, Alex Burness of The Denver Post explains how bills that didn’t make it through the 2021 legislative session may be returning in 2022:

Before the 2021 session ended Tuesday, the party coalesced on policies that will be felt for years to come in the state’s tax code and transportation system, at marijuana dispensaries and gun shops, in courtrooms and classrooms. Lost in the mix were several big-ticket proposals on things like policing, school discipline and workplace harassment.

“In the grand scheme of things, obviously these are very important issues and they’re very personal to a lot of people and it feels very urgent,” Senate Majority Leader Steve Fenberg, a Boulder Democrat, said of the few big Democratic policies that died this year. “Grand scheme of things, getting some of these bills done and making sure we get the policy right over the course of two or three years I think is probably better than rushing something before it’s ready in one year.”

More news is available right after the jump…

► Congressman Joe Neguse (D-Boulderish) is introducing legislation to ban the use of Ketamine during arrests. From a press release:

Today, Congressman Joe Neguse, along with Congressman Jerry Nadler, Chair of the House Judiciary Committee, Congresswoman Sheila Jackson Lee, Chair of the U.S. Subcommittee on Crime, Terrorism, and Representatives Jason Crow, Pramila Jayapal and Mondaire Jones introduced new legislation, the Ketamine Restriction Act, to ban the use of ketamine during an arrest or detention, other than in a hospital.

The bill comes nearly two years after the tragic death of Elijah McClain in Aurora, Colorado. In August 2019, Elijah McClain, a 23-year-old Black man, was stopped by Aurora police officers. During the stop, police put him in a chokehold and multiple officers pressed their body weight into him. Paramedics were then called and injected McClain with 500 milligrams of ketamine. After incorrectly estimating his weight, the paramedics administered more than 1.5 times the dose he should have received, according to medical standards. McClain suffered cardiac arrest, was declared brain dead and taken off life support less than a week later.

► Senators Michael Bennet (D-Denver) and John Hickenlooper (D-Denver) signed on to a letter along with several other Senators from the Western United States asking President Biden to increase emergency disaster funding in anticipation of a bad wildfire season.

► As The Denver Post reports, federal forests in Colorado are getting help from local sources for expenses that should be handled by the federal government:

A few years ago, the U.S. Forest Service sat down with Eagle County officials and delivered some bad news: The federal agency was short-staffed and would be closing campgrounds in the mountainous county that includes Vail, where outdoor recreation is king.

Eagle County responded by spending its own tax dollars to pay USFS employees, an unusual arrangement that has become commonplace in Colorado’s high country, where waves of tourists have poured into some of the most-visited forests in the nation.

“It has rubbed some within the community the wrong way because it’s a federal property and they should manage it with federal money,” Eagle County Commissioner Jeanne McQueeney said. “But if that money is not allocated then they manage it by closing. They don’t have the people.”…

…Coloradans in Congress from both political parties have sought a solution for several years but nothing has made its way to a president’s desk yet. The latest bill has the support of Colorado’s two U.S. senators, as well as Democratic Rep. Joe Neguse and Republican Rep. Lauren Boebert, who together represent all of the high country.

► A Senate subcommittee will hear debate this week on the CORE Act, a Colorado public lands bill that has been championed by Democrats in Colorado’s Congressional delegation.

► Congressperson Lauren “Q*Bert” Boebert was among a group of right-wing Republicans who met with former President Trump last week in New Jersey. Boebert’s office is not responding to requests for comment from reporters — which is par for the course — but the event was chronicled on social media by Boebert’s mother, Shawn Bentz.

Meanwhile, less-crazy Republican Members of Congress are growing increasingly concerned about Trump’s refusal to allow the GOP to put the 2020 election in its rearview mirror.

► Another group of grifty Republicans is trying to recall BOTH Gov. Jared Polis and Secretary of State Jena Griswold. The odds of this succeeding are approximately zero.

► Discussions about where to place a new Congressional district in Colorado may be coalescing around the idea of a Latino-heavy North Metro Denver district.

► Colorado Republicans seem to be devoting most of their time and energy toward taking shots at one another internally.

► A stupid lawsuit by a Republican-aligned group with ties to CU Regent Heidi Ganahl was quickly shot down by a judge. As The Associated Press reports:

A Manhattan judge on Thursday rejected an attempt to force Major League Baseball to return next month’s All-Star Game to Atlanta.

U.S. District Judge Valerie E. Carponi ruled against a not-for-profit organization representing small businesses, saying a lawsuit had failed to provide proof that its members have suffered any injuries by the decision to move the game.

The lawsuit filed May 31 alleged that Major League Baseball acted unconstitutionally when it moved the game from the Atlanta Braves stadium to Denver after Georgia Republicans enacted a restrictive new voting law.

You didn’t need to be a lawyer to have seen this one coming.

► Westword looks at COVID-19 numbers in Colorado, which includes a few areas of concern.

► That’s almost a whole trash bag worth of trash! 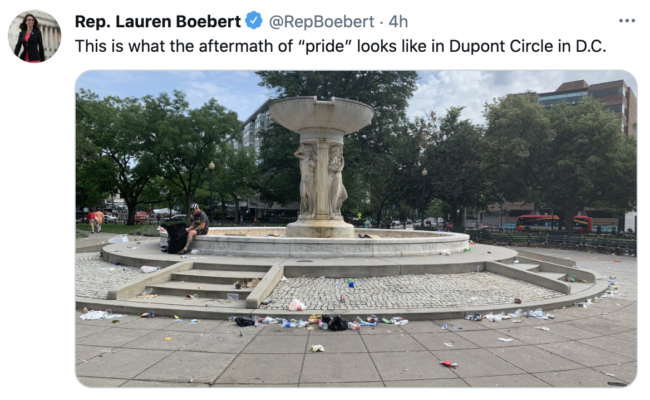 ► An ousted Space Force Commander who has been defended vociferously by Rep. Doug Lamborn (R-Colorado Springs) is apparently a big believer in the idea of “white genocide.”

► As The New York Times reports, Congressional Republicans don’t appear to be at all concerned about the health of American Democracy.

► Congressperson Lauren “Q*Bert” Boebert might want to spend a little more time in her own distrtict.

► Aurora Mayor Mike Coffman isn’t even pretending that his efforts to push an urban camping ban in his city aren’t a purely political maneuver.

► This week on The Get More Smarter Podcast, hosts Jason Bane and Ian Silverii discuss explain why Republicans should stop trying to make “Gerrymandering” a thing in Colorado: