WEDNESDAY UPDATE: 9NEWS’ Kyle Clark got a statement from Heidi Ganahl as local partners of the so-called “Job Creators Network” run away from their lawsuit against Denver:

CLARK: Several Colorado organizations are listed as partners on the Job Creators Network website. As you can imagine they did not love getting asked about it today. CU Regent and possible Republican candidate for governor Heidi Ganahl is the Network’s former chairperson. She told us she’s off the board and wasn’t involved in this lawsuit. She said that she wants the All-Star Game in Denver, but said that how it played out was not fair to business owners in Georgia… 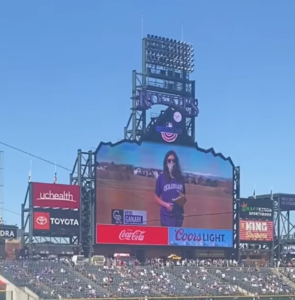 As the Denver Post’s Justin Wingerter reports, an organization billing itself as the Job Creators Network is filing suit against Major League Baseball over the decision earlier this year to relocate the All-Star Game from Atlanta, Georgia to Colorado after Georgia’s passage of controversial vote suppression laws to console themselves over Donald Trump’s election defeat there last November:

A conservative business group is suing Major League Baseball over its decision to move the 2021 All-Star Game to Denver, alleging the league conspired with the players’ union to intimidate the state government of Georgia over a new voting law and to harm Georgia businesses.

The Job Creators Network filed a lawsuit in a New York federal court Monday, asking for Major League Baseball and the Major League Baseball Players Association to pay $100 million to make up for lost business revenues in Georgia. It also seeks $1 billion in punitive damages for their “unprecedented cruelty and hostility” toward Georgia.

“MLB robbed the small businesses of Atlanta — many of them minority-owned — of $100 million,” Job Creators Network CEO Alfredo Ortiz said in a news release. “We want the game back where it belongs.” The organization supports small businesses, including in Colorado and Georgia, and was started in part by the CEO of Home Depot, which is based in Atlanta.

Now first of all, “unprecedented cruelty and hostility” toward Georgia? Didn’t the Union burn Atlanta to the ground during the Civil War? It seems to us like they’re pouring the outrage over losing the All-Star Game on a little thick here.

More relevant to our purposes though we haven’t seen it mentioned yet, the so-called “Job Creators Network” has counted University of Colorado Regent and expected 2022 Republican candidate for something Heidi Ganahl among one of its principals for as far back as we can find records. Ganahl was at one point reportedly the executive chair of the board of Job Creators Network, and co-chaired the JNC’s “National Women’s Coalition” with GOP ex-presidential candidate Carly Fiorina. Ganahl’s association with this group goes back at least as far as 2015.

So now, the question that has to be asked: was Heidi Ganahl, who lobbed the ceremonial first pitch at this year’s Colorado Rockies home opener, involved in the decision to sue Major League Baseball against Colorado’s best interests? Does Ganahl support JCN’s lawsuit seeking $100 million compensation for Georgia over Colorado winning the All-Star Game due to Georgia’s vote suppression laws? If not, why specifically not?

Her answer may tell us a lot, including in which state Heidi Ganahl should be running for office.