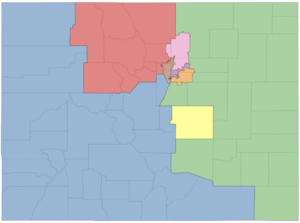 This proposal from COHCC places an 8th CD in the North Metro area (the pink map).

As The Colorado Sun explains in “The Unaffiliated” newsletter, the Colorado Hispanic Chamber of Commerce (COHCC) is pushing for a congressional redistricting map that places a new 8th CD in the North Metro area:

The group wants the new district to be drawn in north metro Denver and be 35% Hispanic.

The district would include Berthoud, Greeley, Firestone, Dacono, Frederick, Fort Lupton, Longmont, Erie, Northglenn, Brighton and Thornton. In a video, the Hispanic Chamber noted the Interstate 25 corridor north of Denver had the highest growth in the state in the past decade, based on 2019 population estimates.

The chamber said the common interest among those cities includes balancing public health with the economics of oil and gas development.

The city of Aurora would remain in the 6th District, under the Hispanic Chamber’s plan. 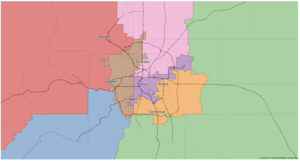 A zoomed-in look at the Congressional redistricting map proposed by COHCC.

This proposal from COHCC seems to be gaining some traction in the redistricting discussion. According to a press release from COHCC, “The district prioritizes communities of interest that may be subject to federal legislation around growth and transportation and the intersection of oil and gas development with air- and water-quality concerns.” The group’s website explains the new 8th CD thusly:

This 8th CD is designed as a minority-influence district, with Latinos comprising nearly a third of the voting-age population, and should be competitive for both parties…

…We believe it is critical to avoid any attempts to “pack” minority voices into a single district under the guise of creating a majority-minority district.

The nonpartisan staff for Colorado’s Independent Congressional Redistricting Commission will release a first look at a potential new map on June 23.