Everything is Going Great in Douglas County! 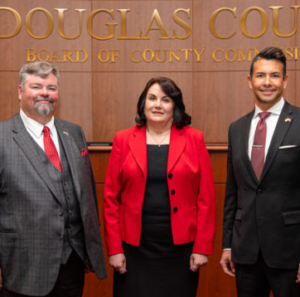 This week, The Denver Post reported that Douglas County Commissioners had fired a representative of the Tri-County Board of Health for “creating distrust” in the county. Marsha Jaroch was canned because she disagrees with the DougCo Commissioners’ weird obsession with getting rid of the Tri-County Board of Health because they are mad that the organization wanted people wear masks so as not to spread COVID-19 (and before you ask…yes, that does seem like a prudent thing for a BOARD OF HEALTH to recommend).

But as The Douglas County News-Press reports, this is just the tip of the rapidly-melting iceberg in this cesspool of local Republican politics:

Infighting has broken out among Douglas County commissioners after the board chair was stripped of that title and the members began lobbing accusations at each other.

The conflict began after Commissioner Lora Thomas posted to her personal website that she was removed from her position as the board’s chair by her fellow two commissioners.

In the April 21 post, Thomas said Commissioners Abe Laydon and George Teal voted during a Monday, April 19 work session meeting to remove her as chair.

The county’s board chair serves as the public representative and leader of the board, according to the county’s policy for commissioners. They preside over meetings and decide agendas. Normally, the chair and vice chair are selected on a rotating basis based on district, according to the policy.

In many counties, the position of “board chair” is a largely ceremonial role that transfers from one elected official to the next every year or two. The role of “board chair” might be more significant in Douglas County, although that probably depends on who you ask.

Commissioner Lora Thomas, who has been openly discussing a 2022 bid for Congress in CO-6, told Colorado Community Media that she was being targeted because of her gender, before breathlessly claiming that she is “trying to save the future of Douglas County.” Almost as an afterthought, Thomas makes vague accusations that Laydon and fellow Commissioner George Teal are pursuing “big government plans” that will harm the County’s finances.

Here’s what Laydon told The News-Press in response:

Unfortunately, Lora Thomas’ egregious abuse of power and willful deceit to advance her political self-interests over the interests of the county represents an ongoing and well-documented pattern of behavior over several years that cannot be further tolerated by the citizens we serve.

Things came to a head last week after Thomas tried to pick fights with another local municipality in a fairly obvious effort to build her Twitter “brand” and raise her own name ID. While it’s tough to choose a side in this spat without having more information, it’s worth noting that Thomas has a history of not getting along with other public officials in Douglas County.

To be fair, Douglas County Republicans aren’t normally known to be dealing from a full deck, but this is silly even by their standards. Maybe there’s a new ingredient in Coors beer or something, because it sure seems that right-wing politicians are melting down in Colorado everywhere you look.