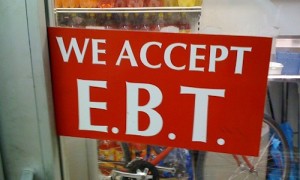 As of January 1st, 2014, Colorado became the first state in the nation to allow adults aged 21 or older to purchase and use marijuana for recreational use. The decision has led to excessively large lines at pot shops across the state and store owners reportedly surpassed $1 million in sales statewide on just the first day according to Denver’s 9News.

In all, 136 licenses have been approved by the state of Colorado for retail operations for the purposes of selling marijuana.  A majority of those licenses were issued to businesses in Denver with just eighteen city stores completing the process in time for opening day. One of those shops, Rite Greens, located on E. Colfax Ave in Denver, has taken the steps needed to accept food stamps (now called EBT cards) for the purposes of purchasing marijuana effectively leading to taxpayer funded marijuana for welfare recipients.

Store owner JC Franco defended his decision to accept EBT cards in an interview with National Report:  “Everyone should have access to marijuana. If a user is not able to afford their buds on a limited budget then having taxpayers help cover the shortage is only fair.  This isn’t a right only for the wealthy.”

If a little red warning light came on in your head sometime while you were reading this story, making you think that maybe this isn't a legitimate report, congratulations! You have better critical thinking skills than the Douglas County, Colorado Republican Party.

National Report is a news and political satire web publication, which may or may not use real names, often in semi-real or mostly fictitious ways. All news articles contained within National Report are fiction, and presumably fake news. [Pols emphasis] Any resemblance to the truth is purely coincidental.

For the record, you cannot legally buy marijuana, in Colorado or anywhere else, with food stamps. Anyone who knows anything about food stamps already knows this. The "news story" that claims this is happening is fake. The only people who didn't get that are conservatives who reprinted the story without checking to see if it's a spoof. Hopefully we've cleared this up before the story appears an a Douglas County GOP newsletter.

More likely, though, you'll be debunking this nonsense with your conservative friends for years to come…