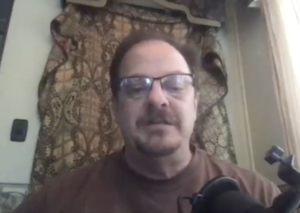 Jim Pfaff broadcast his bizarre Facebook rant from…wherever this is.

From time to time in this space we’ve discussed the, uh, antics of Republican Jim Pfaff, the former Chief of Staff for Colorado House Republicans under former House Minority Leader Patrick Neville who was known mostly for threatening fellow Republicans. When last we mentioned Pfaff in November 2020, he had just sent out a strange press release in an attempt to generate news out of the fact that he had “resigned” from his position at the state legislature.

As Michael Karlik reported this week for the publication formerly known as the Colorado Statesman, Pfaff recently announced another resignation in a typically odd manner:

The former chief of staff to the Colorado House Republicans, who served on the Woodland Park council for just a year amid questions about his residency, resigned his office last week in a Facebook video that included personal attacks and threats against those he deemed “scoundrels.”

Jim Pfaff, who won a council seat in the Teller County community of fewer than 8,000 residents in April 2020, was the subject of an announced recall effort that called into question his legal qualifications to serve in elected office…

…In a video posted on April 16, Pfaff announced his resignation, saying he was “really busy” with helping to start a company, such that “I don’t have the time anymore.”

However, Pfaff then dragged some of the Woodland Park residents who had been outspoken critics of his tumultuous tenure on council.

You can watch Pfaff’s entire 12 minute diatribe on Facebook that looks like it was shot in Buffalo Bill’s basement (the other Buffalo Bill). Pfaff rants and raves about several local political figures (most of whom he labels “scoundrels”), calling them out by name before proceeding to list his grievances with each individual. The following excerpt, which appears around the 10 minute mark, is a good nutshell example of what you’ll find on the rest of the video:

PFAFF: The announcement is that I have submitted my resignation from the council. I have a massive effort that I am undertaking with my company and my partners. I’m working around the state and around the country, but mostly here in the state, so I can locate a manufacturing and software engineering plant to support the efforts of the company that I am helping to found. And we’re right there — we’re really busy with this, and to be candid, I don’t have the time anymore. I just have to keep focused on what is my future. And I think that’s best for me and Myra.

And by the way, Michael Dalton, I don’t give a flip if you came to every meeting if I were still staying here. You do not intimidate or concern me. You’re frankly one of the worst things that’s happening in this town right now, and you should be ashamed of yourself. And no, you do not follow God. You don’t. You’re not even a born again believer. So don’t even fake people out about that. You’re a false prophet, and I am not intimidated by you and I don’t give a — I’ve never given a flip about what you said. I’m saying this because it’s the best for my family.

Pfaff never mentions the name of his business venture, though he does go on at length about how he is talking to “economic development folks around the state” and that Woodland Park would have been a prime location for his “manufacturing and software engineering plant” if only the town weren’t so full of scoundrels.

Posting extended Facebook rants was a regular occurrence during Pfaff’s time on the Woodland Park City Council, which seemed to be mostly about arguing at other people. In that regard, Pfaff is a good example of the sort of problems that plague that Colorado Republican Party in general: Short periods of intense, petulant screaming that eventually leads to someone taking their ball and going home.