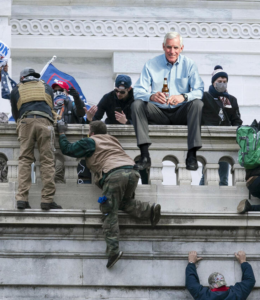 As readers may be aware, since the January 6th insurrection at the U.S. Capitol attempting to overturn the results of the 2020 presidential elections, a substantial number of large corporate donors have announced they will no longer make campaign donations to Republican politicians who both voted to second-guess the results on January 6th and encouraged their supporters to come to Washington and participate in what became a riot.

Perhaps as a result, Rep. Lauren Boebert of Colorado, one of the most vocal dead-enders backing Donald Trump’s baseless assertions that the election was stolen to the end, had a difficult first quarter of fundraising–even after a last-minute revision upward only raising about $845,000, well short of her higher-profile freshman fireband colleagues Madison Cawthorn and Marjorie Taylor Greene. Where MTG in particular managed to turn the revulsion of most well-adjusted people into a grassroots fringe fundraising goldmine, Boebert has failed to reap the same benefit–and that’s a problem since Boebert almost certainly faces a more competitive race in 2022.

With that said, looking through Boebert’s fundraising reports posted online this week, we find a spate of donations on January 10th–a mere four days after the January 6th insurrection–including plenty of recognizable local names among one big name:

And we see none other than Pete Coors, 2004 Republican U.S. Senate candidate and keeper of the Coors family honor…well, less so on that last point these days, but still very much reflecting on his corporate namesake with his political donations, wrote Boebert a $500 check on January 10th. MolsonCoors in keeping with its Coors family heritage does overwhelmingly give to Republican candidates as a corporation, and we haven’t seen that they’ve explicitly joined the donor boycott of Republicans in Congress content to break democracy when it didn’t go their way.

But by making this donation just a few days after the violence at the Capitol that Boebert whether she wants to admit it or not helped set the stage for, Pete Coors made his own statement about responsible political giving, and it comes across like a beer magnate driving drunk.

On the upside, you’ll get to vote about it with your next six pack.