Rose Pugliese for County Attorney, or SOS, or Whatever

FRIDAY UPDATE: Charles Ashby of The Grand Junction Daily Sentinel confirms what we first reported on Thursday: Rose Pugliese withdrew her name from consideration for the Mesa County Attorney position:

In a letter of withdrawal sent on Tuesday, Pugliese told Commissioners Janet Rowland, Cody Davis and Scott McInnis that she’s not yet done with politics. As a result, she is not ready to take a bureaucratic position where she isn’t supposed to be political.

“Thank you for the opportunity to interview with you as a finalist for the Mesa County Attorney position,” Pugliese wrote in a letter of withdrawal from consideration. “Upon much deliberation and prayer, I realized that at this point in my life, my passion lies in my political work, and I am not ready yet to put that work aside. The county attorney needs to possess political savvy without being political. Therefore, I withdraw my name from consideration.”

This would also seem to confirm our original point: That Pugliese is focused on running for Secretary of State in 2022. 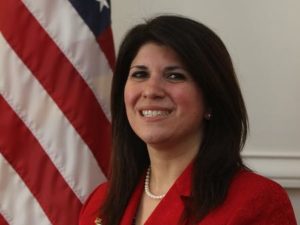 As we had previously reported in this space, the endlessly-ambitious former Mesa County Commissioner Rose Pugliese is seeking the Republican nomination for Secretary of State in 2022. From what we hear, Pugliese recently moved to Colorado Springs in part to make it easier to seek statewide office by being geographically closer to the majority of voters and potential donors.

Unless Pugliese is about to become the new Mesa County Attorney in Grand Junction.

Stick with us, because this story is a bit messy…

Pugliese has long been mentioned as a potential “rising star” in the Republican Party. In September 2019, The Denver Post featured Pugliese along with failed SD-27 candidate Suzanne Taheri and State Sen. Kevin Priola as three Republicans who could “save the Colorado GOP from obscurity.”

Pugliese has positioned herself as a champion of right-wing issues like Climate Change denial and blind obedience to the oil and gas industry, and her extracurricular political activities have kept her name in the mix in GOP circles for other jobs (Pugliese finished her second term as Mesa County Commissioner in January). In 2020, Pugliese was one of the main organizers of a failed effort to overturn a Colorado law that seeks to award the state’s electoral votes to the Presidential candidate who wins the National Popular Vote.

Pugliese was rumored to be on the short list of potential running mates for 2018 Republican gubernatorial candidate Walker Stapleton (former State Rep. Lang Sias was ultimately awarded that turd of a prize). In 2019, Pugliese registered a campaign committee to run for a state senate seat in SD-07…in 2022. Pugliese terminated that committee on February 22, 2021, which was probably a good idea since she no longer lived in the district; public records show that Pugliese purchased a home in Colorado Springs in October 2020, and on January 5, 2021, she officially changed her voter registration to that same address. This move was not a secret: She penned a thank you letter to Mesa County citizens that ran in The Grand Junction Daily Sentinel in December 2020 in which she noted her plans to relocate to Colorado Springs (the bio on her website also lists her as a resident of Colorado Springs).

Now, here’s where things get weird. On Sunday The Grand Junction Daily Sentinel reported that the Mesa County Board of Commissioners was struggling to defend its decision to announce Pugliese as THE SOLE FINALIST for the job of Mesa County Attorney, which [checks map] is nowhere near Colorado Springs. That decision came only after previous finalists apparently failed to impress someone, as the Sentinel explains:

On Feb. 15 the commissioners publicly announced that they had chosen Atencio and Chief Deputy District Attorney Jennifer Lee Springer as the two finalists. Atencio has been with the county attorney’s office for a decade, while Springer has worked in the DA’s office for more than a dozen years.

Commissioners then formally interviewed Atencio and Springer in separate close-door sessions on March 16, but three days after that the application process was reopened, which was announced with little fanfare and no comments during a regular commissioners’ meeting.

The second round was intended to increase the applicant pool, resulting in six additional people applying, including Pugliese…

…The following Monday, Pugliese was named the sole finalist.

Pugliese acknowledged her role in this process in an interview with the Sentinel…in which she noted again that she had already moved to Colorado Springs:

Pugliese told The Daily Sentinel that she didn’t apply during the first round primarily because she had recently moved to Colorado Springs with her two young children, and was starting a new job there in the law offices of Wegener, Scarborough & Lane, where she is of counsel along with Willett working on estate planning and business development for municipal and county outsourced work.

It’s also worth noting that the law firm of Wegener, Scarborough, and Lane lists Pugliese as a staff attorney, which is a job she could not have held prior to January on account of the fact that she was still a Mesa County Commissioner. Anyway, Pugliese was supposed to have her final interview for the Mesa County Attorney job on Monday. But from what we hear, Pugliese instead withdrew her name as a candidate for the position.

Perhaps Pugliese’s name is out of the mix for County Attorney because of public criticism (on Sunday, the editorial board of The Grand Junction Daily Sentinel blasted the decision to name Pugliese as the sole finalist). Maybe Pugliese finally realized that a daily commute from Colorado Springs to Grand Junction would be a nightmare. Or…it’s possible that Pugliese figures that this sort of dysfunction is exactly the sort of thing that would endear her to a GOP base that remains devoted to Donald Trump. Support Rose Pugliese for Secretary of State, or she’ll do something else!