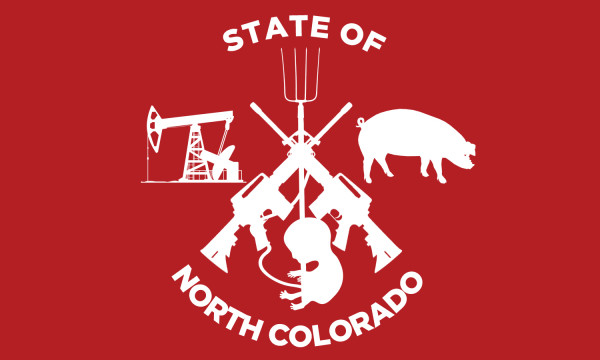 The flag of North Colorado, which is not going to happen.

A press release today from a coalition of local environmental organizations celebrates the failure of a legal challenge by always cantankerous Weld County, against new air quality rules adopted in the wake of 2019’s landmark Senate Bill 19-181 reform of oil and gas drilling to favor public health over drill baby drill:

Denver District Court Chief Judge Michael A. Martinez granted a motion by the state of Colorado to dismiss Weld County’s lawsuit against the Air Quality Control Commission (AQCC) and the Colorado Department of Public Health and Environment. The county had sought to overturn new air quality rules for oil and gas development adopted by the AQCC in Dec. 2019. They were the first air quality rules adopted under Senate Bill 181, which mandates reductions in ozone-forming pollutants and methane emissions from oil and gas development.

The seven conservation and community groups include Western Colorado Alliance (WCA), League of Oil & Gas Impacted Communities (LOGIC), Conservation Colorado, Earthworks, the Sierra Club, Citizens for a Healthy Community and the San Juan Citizens Alliance. They had intervened in the case in support of the state and in defense of the rules they helped pass in December.

The court’s decision allows the new air quality protections to take effect statewide, including one proposed by three local community organizations (LOGIC, WCA and the Grand Valley Citizens Alliance) and adopted unanimously by the AQCC that requires energy companies to inspect wells, tanks and other infrastructure for leaks more frequently within 1,000 feet of homes, schools, parks and other occupied areas.

Judge Martinez’s decision is a win for people who live near wells and other oil and gas infrastructure. Coloradans statewide will benefit from reduced ozone emissions. And the state will also remain a leader in lowering methane emissions, one of the most potent greenhouse gases.

As readers know, from oil and gas drilling to gun laws to COVID, Weld County is fast becoming the state of Colorado’s nexus of “resistance” to all the realities of the present day conservatives spend so much of their time these days…you know, “resisting.” The northeast region of the state including Weld County actually made an effort via a number of countywide ballot measures back in 2013 to form a new state with a capitol presumably located in Greeley as “North Colorado’s” largest city–which ended in humiliation after a majority of Weld County voters could not be persuaded to join the revolution.

While Weld County’s refusal to enforce Colorado’s gun laws and face mask order puts everyone present within county lines in danger, there’s a simple enough solution to those risks: stay away from Weld County. When it comes to air pollution, however, anyone in Denver who has “smelled Greeley” when a cold front blows in from the north knows that air pollution in Weld County affects all of us. So in that sense, we’ll all breathe easier if Weld County is obliged to follow the same rules as everybody else.

And if the State Patrol writes some tickets against face mask scofflaws in Weld County, that’s okay too.