The Tragic Madness Of Weld County

UPDATE #2: The city of Greeley, the seat of Weld County, is not on board with the county’s”damn the torpedoes” approach to reopening the economy reports Denver7:

Despite the spat between Weld County and the governor, Greeley Mayor John Gates says the city, which is in Weld County, supports “safer at home” and will extend the closures of city facilities until June 2.

“Based on the medical and scientific data, and the high number of cases in Weld County, the City of Greeley strongly supports following the ‘Safer at Home’ philosophy,” Gates said in a statement. “This approach protects lives, flattens the curve, and is a step in the right direction for getting our community back to a fully operational economy.”

I Represent Adams Co and this reckless policy endangers my community. #WeAreAdams https://t.co/PLdYuemS3A 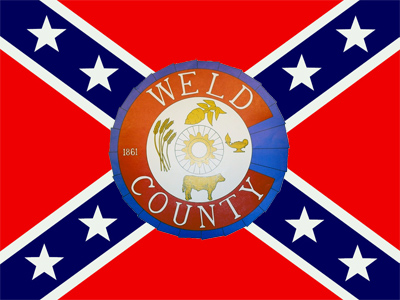 Our original proposal for the flag of “Weldistan.”

9NEWS reported this morning on a plan by conservative Weld County, which has suffered a disproportionate number of illnesses and deaths during the COVID-19 pandemic, at one point leading the state in COVID fatalities despite a fraction of the population of Denver and other much larger counties with fewer deaths. As of today Arapahoe County and Denver have pulled ahead in absolute numbers, but not in the death rate relative to population.

Despite this, Weld County is rushing ahead, they say, with a full reopening of the economy Monday including restaurants and other high-risk businesses:

The Weld County Board of Commissioners and the Weld County Department of Public Health and Environment dubbed their strategy the “safer-at-work” plan, in clear contrast to the “safer-at-home” plan Colorado Gov. Jared Polis announced earlier this week.

The chair of Weld County’s board of commissioners, Mike Freeman, told 1310 KFKA Radio that the county will not direct businesses to open, but it will provide guidelines for all of them to do so if they choose.

“This will be for businesses, in general, to open across the board,” he said. “I think the governor’s been pretty clear all along that his orders are unenforceable.” [Pols emphasis]

As of Thursday, Weld County had the third-highest total of COVID-19 infections and deaths among counties in Colorado, with a total of 1,263 cases and 70 deaths. The county also has seen deadly outbreaks at a meat-packing plant and several nursing homes…

State Sen. Jessie Danielson, D-Wheat Ridge, grew up in Weld County and still has scores of family members and friends there. If all these businesses reopen, she said she worries about their health and safety.

Gov. Jared Polis’ response today makes clear that, although he may not be sending the proverbial troops in, Weld County is in the midst of a very bad idea:

It’s not clear what happens next, since the perpetually cantankerous government of Weld County seems determined to relax their restrictions without meeting any of the most common-sense criteria for doing so. Weld County is one of the hardest-hit locations in Colorado during this pandemic, making their determination to throw the doors open starting Monday an almost incomprehensible defiance of reason–not to mention abandonment of the sworn responsibility of elected officials to protect their constituents.

Led by Rep. Ken Buck, the former Weld County DA whose extreme minority votes against coronavirus relief legislation and lambasting of the stay-at-home orders made made him nationally infamous, Weld County’s already tragic experience with COVID-19 is being offered up now as some kind of twisted badge of courage. Surely if the people of Weld County, which has suffered so much disproportionate harm from the pandemic so far, are willing to defy Gov. Polis, state health officials, and the overwhelming scientific consensus to throw the doors open on Monday, the rest of us should “man up” and demand the same. And if we don’t, by God, Weld County is going ahead without us.

But unlike the much-lampooned failed secession attempt led by Weld County a few years ago, this act of self-destructive defiance is very likely to have needless deadly consequences. Although it feels bold and brave to those enraptured with misguided rebelliousness, and they put themselves at risk along with the voters who entrusted them to lead, what the elected leadership of Weld County is doing here is not bravery.

It is a devaluation of human lives.