Weld Sheriff: I’d Rather Take My Risk With the Virus Than Socialism

Sheriff Steve Reams is the top public safety official in Weld County, Colorado. Yet even after his county declared a pandemic health emergency last week, the coronavirus isn’t his top concern. Reams is worried about socialism.

I’m going to rant just a bit,” wrote Reams on Facebook. “I understand that nobody wants to catch Coronavirus but statistically, even if you catch it you’re likely to be just fine. What I’m concerned with is our Country catching a huge case of socialism. We (our government) has self imposed an economic crash in the name of saving us from a virus and now they are offering the “solution” through money that isn’t really available; let’s call that debt. If you read the attached article, examine what is being suggested and ask yourselves if this is makes sense. Maybe it’s just me but I’d rather take my risk with the virus then socialism.”

When criticized by a commenter, Sheriff Reams reiterated his position:

Reach by phone, Reams acknowledged that the pandemic has created a challenging environment:

“It’s frustrating on both sides, as a citizen and as a law enforcement office to see so many people disregarding the public health warnings and then people asking government to enforce [the public health emergency declarations] to make them feel safer,” Reams told the Colorado Times Recorder. “Asking for the government to be the fix for all this is probably the wrong way of thinking for all of us. It creates a fear of government from citizens who are going to worry, ‘What if I need go somewhere?’ It reeks of police state.”

Despite his discomfort with government enforcement of public health restrictions, however, Reams isn’t willing to go as far as he did with the 2019 “red flag” gun law, when he publicly declared the law unconstitutional and said he would go to jail before enforcing it. Asked if he would do that same now, he answered he doesn’t intent to make public health orders a priority of enforcement.

“I don’t intend to make those statements about any of the public health orders, but I don’t intend to make those a priority of enforcement. I think there is some question of whether or not the Governor has the authority. to issue a shelter-in-place statewide order,” said Reams. “All that being said, I think it’s the responsibility of folks to do the right thing and protect themselves and their neighbors. If we see someone who is out willfully trying to cause problems that impact the health and safety of the community we’ll obviously interact with them, but day-to-day patrolling of bars and restaurants is not something we are prioritizing at this point.”

Sheriffs Reams emphasized the importance of people exercising common sense and voluntarily heeding social distancing rules. He cited last weekend’s Weld County Republican Assembly as an example of people restructuring an event to do just that — to keep the appropriate social distance. The event was changed to a drive-up format in a high school parking lot where delegates voted from their cars. 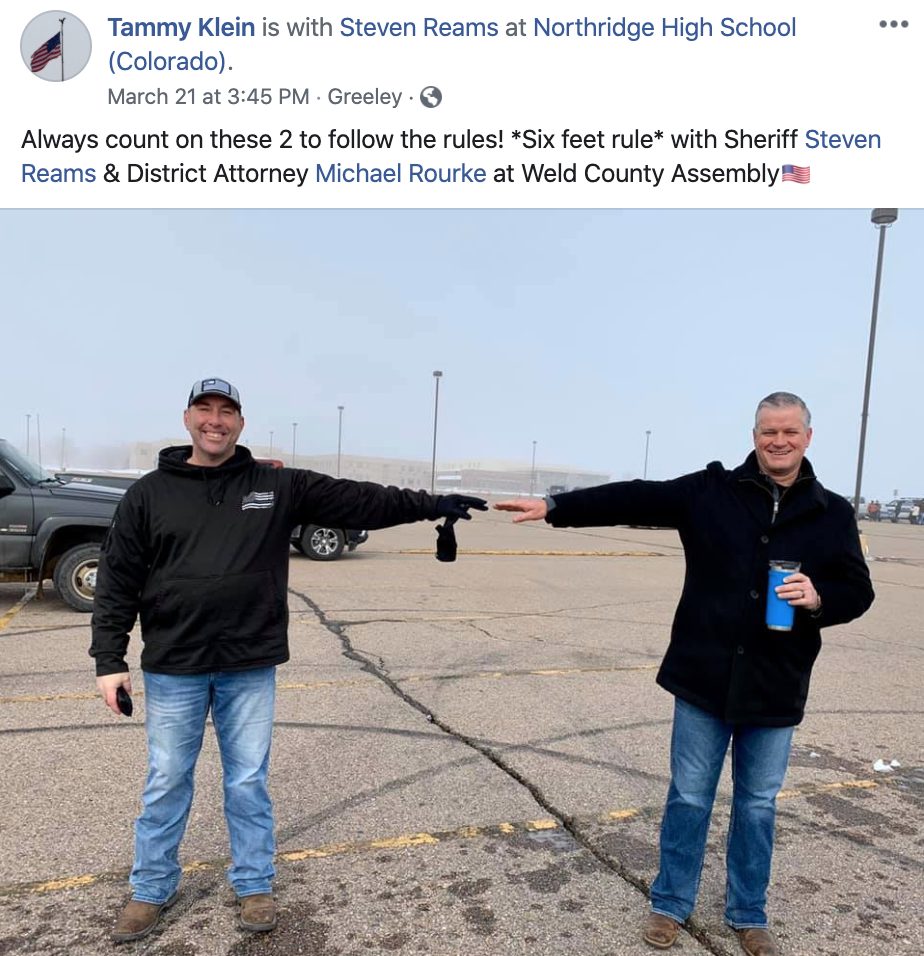 Earlier this week the Colorado Academy of Family Physicians asked Colorado Governor Jared Polis to issue a statewide shelter-in-place order. So far Polis has not done so, preferring for local government to make their own decisions.

Denver Mayor Michael Hancock issued that order, with exceptions for “essential businesses and activities,” on Monday.

On Wednesday, the board of the Tri-County Health Department (TCHD) issued a similar order for its region: Adams, Arapahoe and Douglas counties. This decision so angered state legislators from Douglas County that they wrote a letter to the County Commissioners, demanding it dissolve its relationship with TCHD.