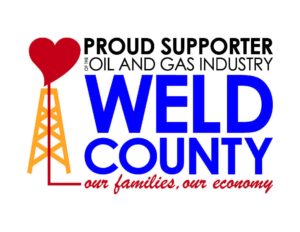 Back on April 22, the Weld County board of commissioners met to unanimously approve a resolution in support of the oil and gas industry–a significant component of the county’s economy, putatively “under threat” by the now-signed Senate Bill 19-181. As the Greeley Tribune reported then:

A banner declaring Weld County a “proud supporter of the oil and gas industry” hung outside the Weld County Administration building Monday morning, in anticipation of the Weld County Commissioners reading a proclamation all five signed declaring their support for the industry…

Inside, televisions and projector screens showed the same image, as did signs hanging by each commissioner’s nameplate, and dozens of oil and gas employees and supporters gathered to share their concerns about the bill.

You’ve got to admire the theatricality of it if nothing else. This was a meeting of a government body to nominally debate and then vote on a measure, but the propaganda blazing on every monitor screen and on signs and banners around the meeting singing the praises of the oil and gas industry makes it clear that the outcome of the vote was never in doubt. And as the Trib reports today, taxpayers even picked up the tab for the signage!

The banners, signs and bumper stickers declaring Weld County a supporter of the oil and gas industry displayed and handed out at an April Weld County Commissioners meeting were paid for from the county’s general fund.

To be clear, our purpose today is not to question the propriety of spending almost two thousand taxpayer dollars on signs and banners to fellate what is by far the most politically cantankerous and defensive private industry in the state–although we expect that some will, including some Weld County taxpayers with standing to complain. We assume that Weld County commissioners have got a petty cash fund to cover this kind of thing that’s entirely within their discretion to spend, much like ex-Secretary of State Wayne Williams’ $700 cowboy boots.

But this demonstration of boot-licking obeisance to the oil and gas industry by a local government in Colorado does reinforce a very important fact about Senate Bill 181. Because the bill empowers local authorities like the Board of Commissioners in Weld County to exercise much more control over oil and gas drilling decisions, that means Weld County will still have broad authority to let the industry “drill baby drill” within the boundaries of Weld County. Make no mistake, they don’t get to be more permissive than statewide rules, but we know now that the dust has settled that this law was not written to put the industry out of business in Colorado.

So yes, while it’s kind of pathetic, supporters of the industry can take heart! Weld County loves you, and thanks to Senate Bill 181 they’re empowered to show you–with much more than taxpayer-funded bumper stickers.