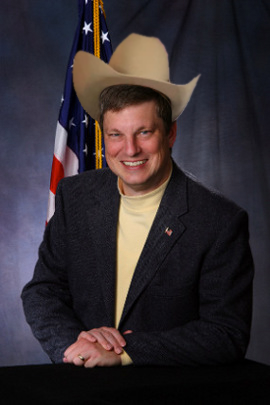 The Denver Post’s Ben Botkin breaks news today that could spell big trouble for incumbent Republican Secretary of State Wayne Williams, who is facing an unexpectedly stout challenge from Democratic election lawyer Jena Griswold. Readers will recall a major scandal that erupted in the latter part of former SoS Scott Gessler’s single term, in which Gessler was found at length by the state’s Independent Ethics Commission to have improperly spent funds from an office account on travel to partisan political events. The scandal, among other things, helped scuttle Gessler’s 2014 gubernatorial aspirations.

As the Denver Post reports today, the same office “slush fund” appears to have been improperly tapped by current Secretary of State Wayne Williams:

Colorado Secretary of State Wayne Williams wears a $475 cowboy hat to Denver Rustlers events. He wore $349.80 tuxedo pants and $699.60 dress boots to a cybersecurity conference in 2015.

These expenses are public information because Williams charged them to his state office. He paid for them out of the office’s $5,000 discretionary fund, an annual perk enshrined in state law…

The cowboy attire is tied to Williams’ involvement with the Denver Rustlers, a nonprofit that raises money for youth exhibitors at the Colorado State Fair Champion Junior Livestock Sale. A tradition since 1984, the nonprofit’s participants include civic leaders and government officials from both parties.

As was thoroughly explored during the ethics investigation into Gessler’s misuse of the same discretionary account, officials do have quite a bit of leeway when it comes to how these funds are spent. The law governing these discretionary accounts says only that the funds must be used “in pursuance of official business.” Gessler ran into trouble for using these funds to help cover the costs of partisan political activities.

And yes, Williams through his deputy Suzanne Staiert claims that he somehow bought these items “in pursuance of official business” as the law requires. Apparently the $700 boots were mission-critical for a cybersecurity conference attended. And really, folks, what self-respecting Colorado Republican is going to show up to Larry Mizel’s annual bow-and-scrape party at the Colorado State Fair without a $500 cowboy hat?!

Back in reality, of course, this is very bad news for Wayne Williams at what could be the worst possible moment. This is such a stupid and unnecessary mistake to make, however, that it’s very hard to be sympathetic. Where Gessler at least had a case to make that he was on some official business during the travel he was busted by the IEC for, nobody is going to give Williams a pass for buying $700 boots and a $500 hat with taxpayer dollars under any circumstances. Not the IEC, and definitely not any voter who hears about this.

$700 is a lot for boots, but they could end up costing Wayne Williams far more in the end.