Get More Smarter on Thursday (December 19)

If you’re counting today, there are six shopping days left until Christmas. It’s time to Get More Smarter. If you think we missed something important, please include the link in the comments below (here’s a good example). If you are more of an audio/visual learner, check out The Get More Smarter Show or The Get More Smarter Podcast. And don’t forget to find us on Facebook and Twitter.

► “Trump Impeached.” If you picked up a newspaper anywhere in the United States today, there is a good chance this was the headline at the top of the page. 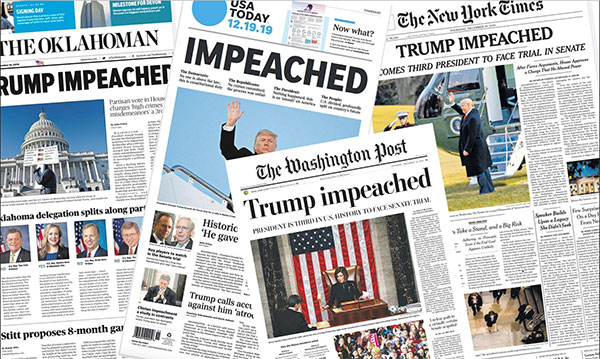 Collage via The Guardian newspaper

As The Washington Post explains, the impeachment spotlight now turns to the U.S. Senate:

The day after Trump was impeached by the House for abuse of power and obstruction of Congress, questions continued to swirl about the timing and scope of an anticipated Senate trial regarding his conduct toward Ukraine.

House leaders suggested a possible delay until they can get a guarantee of a fair trial in the Senate. Senate Majority Leader Mitch McConnell (R-Ky.), meanwhile, in a floor speech, sharply criticized the House process as rushed and unfair and suggested that House Speaker Nancy Pelosi (D-Calif.) is “too afraid” to transmit “their shoddy work product.”

Meanwhile, Trump, who is just the third president in U.S. history to be impeached, praised Republican unity Thursday in opposing the move, claiming that is “what people are talking about.”

House Speaker Nancy Pelosi is apparently waiting to send articles of impeachment to the U.S. Senate until she has some assurances that Senate Majority Leader Mitch McConnell has agreed to some basic parameters about how a Senate trial might proceed.

Colorado’s Congressional delegation split along party lines on both impeachment questions. Via The Denver Post:

“Unfortunately, President Trump has left us no choice,” Rep. Joe Neguse, a Lafayette Democrat, said on the House floor Wednesday. “The fact of the matter is, the president abused the power of his office and invited a foreign country to interfere in our elections. In so doing, he undermined the sanctity of the free and fair elections upon which our republic rests.”

Meanwhile, Greeley Republican Rep. Ken Buck — who also serves as the State Republican Party Chairman — continues to promote his strange argument that virtually every other President in American history could have been impeached based on the same standards as those used in allegations against President Trump.

► President Trump spent Wednesday evening at a campaign rally in Michigan, where he inexplicably suggested that the late Rep. John Dingell of Detroit was “looking up” from Hell.

► Late in the day on Wednesday, the 5th Circuit Court of Appeals issued a long-awaited ruling on the constitutionality of the Affordable Care Act. Politico explains the court’s decision to punt on the broader question of whether the ACA can remain in place:

…the appeals court ruling largely ducked the central question of whether the rest of the Affordable Care Act remained valid after Congress removed the penalty for not having health insurance. The three-judge panel instead sent the case back to a Texas federal judge, who previously threw out the entire law, to reconsider how much of Obamacare could survive.

The high-stakes ruling keeps the legal threat to Obamacare alive while reducing the likelihood the Supreme Court could render a final verdict on the law before the next elections. Still, the appeals court’s decision could renew pressure on President Donald Trump and Republicans to explain how they will preserve insurance protections for preexisting conditions after failing to agree on an Obamacare replacement for years.

► Don’t miss this week’s episode of The Get More Smarter Podcast, featuring an exclusive interview with Governor Jared Polis.

► It has not been a good couple of weeks for 710 KNUS “Nazi Talk” radio. Station management continues to wrestle with a decision on what to do about producer Kirk Widlund amid pretty strong evidence that he is a neo-nazi. On Wednesday, the station abruptly pulled the plug on “The Chuck and Julie Show” after co-host Chuck Bonniwell made an absolutely inexcusable “joke” on the air Tuesday.

As the Colorado Times Recorder reported on Wednesday:

Denver radio host Chuck Bonniwell began a segment of his afternoon radio show Tuesday by lamenting the “never-ending impeachment of Donald Trump,” and then saying, “You know, you wish for a nice school shooting to interrupt the monopoly.”

Bonniwell’s awful comments made national headlines. He couldn’t save his hide with this half-assed and completely tone deaf attempt at an “apology”: 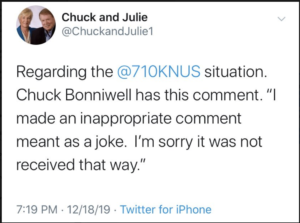 ► The head of the House Freedom Caucus announced that he will not seek re-election in 2020. As CNN reports:

Republican Rep. Mark Meadows, one of President Donald Trump’s most visible allies on Capitol Hill, is not seeking reelection in 2020, he announced in a statement Thursday.

“After prayerful consideration and discussion with family, today I’m announcing that my time serving Western North Carolina in Congress will come to a close at the end of this term,” Meadows said in a statement.

The North Carolina Republican was first elected to Congress in 2012 and has since played a major role in shaping the House GOP over the last few years, including as the former chair of the conservative House Freedom Caucus. A source familiar told CNN that the timing of Meadows’ announcement was driven by the North Carolina candidate filing deadline, which is Friday.

The political headwinds in 2020 do not appear to favor the GOP; Meadows is the 21st Republican Member of Congress who is not seeking re-election.

► As Colorado Public Radio reports, efforts to allow legal marijuana businesses access to banking services may have hit a snag in the U.S. Senate:

Republican Sen. Mike Crapo of Idaho ended up giving a little lump of coal to supporters of the SAFE Banking bill.

Crapo, the chair of the Senate Banking Committee, said he doesn’t support the SAFE Banking Act as passed in the House in September.

The bill, sponsored in the House by Colorado Democratic Rep. Ed Perlmutter and in the Senate by Colorado Republican Sen. Cory Gardner as well as  Oregon Democratic Sen. Jeff Merkley, would have made it easier for licensed marijuana businesses to access financial services.

► Denver Mayor Michael Hancock is among dozens of mayors around the country asking President Trump to back off of a proposed plan to increase fees for citizenship applications.

► Colorado can’t have nice things because of TABOR.

► Caitlyn Kim of Colorado Public Radio examines a long list of budget priorities that Congress must address before the end of the year.

► Congress may raise the legal age for tobacco purchases from 18 to 21; if it doesn’t, Colorado may do it anyway.

► Gas prices in Colorado could be trending downward, according to a press release from AAA Colorado:

AAA forecasts that Centennial State motorists will enjoy some of the country’s most significant savings on gas heading into the new year, with pump prices expected to plummet by as much as a quarter in the coming weeks. The reason? Increasing gasoline stocks coupled with an anticipated seasonal demand drop will together drive prices down.

Regional gasoline stocks have averaged 7 million barrels since early October, per data from the Energy Information Administration. Refinery utilization rates, meanwhile, have hovered around 85 percent or higher. Those two factors, combined with the seasonal switch-over to winter-blend gasoline – which is cheaper to produce and sell – are driving down gas prices.

“Pump prices are finally trending downward in Colorado in what has been an abnormally expensive regional gas market, of late,” said AAA Colorado spokesman Skyler McKinley. “The even better news is that 2019’s prices are down nearly a dime from 2018, thanks in large part to cheaper crude oil prices.”

► The Democratic Senatorial Campaign Committee (DSCC) is hitting Colorado Sen. Cory Gardner (R-Yuma) with a new digital ad buy critical of Gardner’s support for the 2017 Trump tax plan that primarily only benefitted the wealthiest Americans. This week marks the two-year anniversary of the tax plan that Senate Republicans rammed through Congress just before the holiday break.

► According to a press release from the Colorado Democratic Party, Colorado’s Peterson Air Force Base is still waiting for millions of dollars that it thought it had already secured for new construction projects:

The Senate’s year-end appropropriations bill failed to restore the $8 million that Senator Cory Gardner voted to let President Trump raid from Peterson Air Force Base — or do anything else to ensure that Trump doesn’t again try to circumvent Congress at the expense of Colorado’s military community.

Gardner’s first vote to support Trump’s sham national emergency led the Denver Post to revoke their 2014 endorsement, writing that Gardner “has become precisely what we said in our endorsement he would not be: ‘a political time-server interested only in professional security.’”

Since then, Gardner voted two more times for Trump’s power grab — even after Colorado learned that Gardner broke his promise to protect funding for Colorado military projects and Peterson Air Force Base would lose $8 million. Gardner refused to explain his broken promise. The Denver Post editorial board wrote that “Gardner failed to protect Colorado from cuts in addition to failing the U.S. Constitution.”

A recent records request revealed that Gardner apparently didn’t even reach out to Peterson officials about protecting the funding from the beginning. Last week, a federal judge pumped the brakes on the raid — but Gardner has not said if he still stands by his votes to let Trump circumvent the Constitution.

► Senate Republicans are quietly hoping that President Trump will stay away from the Twitter machine once the Senate takes on the House case for impeachment. The odds of that happening are approximately zilch.

► President Trump is getting public support for his claims of an unfair impeachment process from a peculiar source: Russian President Vladimir Putin. As the Associated Press reports:

Russian President Vladimir Putin said Thursday that U.S. President Donald Trump was impeached for “far-fetched” reasons, calling the move by Democrats a continuation of their fight against the Republican leader.

“It’s simply a continuation of internal political struggle,” Putin said at his end-of-year news conference in Moscow. “The party that lost the (2016) election, the Democratic Party, is trying to achieve results by other means.”

He likened Trump’s impeachment to the earlier U.S. probe into collusion with Russia, which Putin played down as groundless. Former special counsel Robert Mueller concluded earlier this year that the Russian government interfered in the 2016 U.S. presidential election in a “sweeping and systematic fashion.”

► The editorial board of The Denver Post endorses the impeachment of President Trump.

► You haven’t missed it yet, but just in case: There is another Democratic Presidential candidate debate tonight in Los Angeles.