Inaccessibility is the Gardner Brand 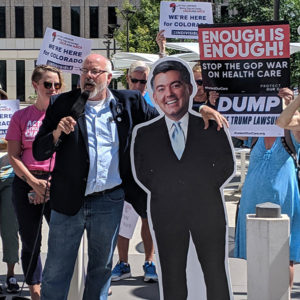 The Cardboard Cory Bus Tour is in the middle of a weeklong jaunt around Colorado. In multiple stops across the state (most recently in Ft. Collins and Greeley), the cardboard version of Gardner is attracting more attention than the real man himself. Some of this is because of a clever idea and effective organizing by progressive groups behind the tour, but none of it would have been possible if Gardner had not built himself into the image of a politician who can be so easily caricaturized by a piece of cardboard.

Of course, Gardner and his staff have nobody to blame but themselves for this predicament, but it has been fascinating to watch how the Yuma Republican is playing right into the hands of his detractors lately. The Cardboard Cory Bus Tour is intended to demonstrate the Senator’s inaccessibility, and Gardner is helping this cause during the August recess by regularly showing up (with little notification) at small venues on the same day and in the same zip code as Cardboard Cory. It’s inexplicable.

Take a look at this story today from the Ft. Collins Coloradoan:

Gardner took a tour of Wellington businesses last week as part of his Main Street Walking Tours series. The Wellington visit included prearranged stops and conversations at local businesses. His office informed the Coloradoan about the private tour a day in advance. 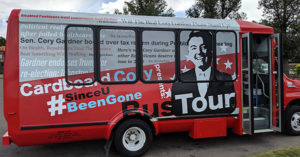 And this story from the Greeley Tribune:

In fact, the Gardner office informed the Greeley Tribune on Tuesday afternoon the real Gardner would be in Greeley that very same day, touring a pair of food production facilities in town. The public was not invited to either event, but the newspaper was invited, without cameras, to join the senator as he toured Hungenberg Produce…

…Gardner, through a spokesperson email, provided a statement he also gave to another media outlet in the region earlier in the day:

“I have been traveling across all four corners of the state meeting with Coloradans,” the statement read. “My Main Street Walking Tours have continued, taking me to more than a dozen towns across the state. These informal meet and greets are a great way to hear directly from Coloradans, and I take these discussions to Washington to fight for bipartisan solutions.”

Does Team Gardner not realize how this looks? Are they trying to validate their critics? It is puzzling to say the least. We could be just a few days away from Gardner holding a press conference to challenge his cardboard counterpart to a fist fight (alas, that would require Gardner to show up in public with advance notice).

The Cardboard Cory tour arrives in town and spreads the message that Gardner is ignoring his constituents. The real Gardner sneaks into the same area like he’s in the witness protection program and feeds the same obtuse statement about his visit to local reporters. You’d be hard-pressed to come up with a worse response to this sort of activism than what Gardner is actually doing at the moment.

Perhaps this sort of behavior is so ingrained that Gardner and his staff can no longer operate any differently. Inaccessibility is the brand; obfuscation is the service. It’s possible that they don’t know how to sell anything else. Gardner is a walking, talking paywall, minus a working URL; even if you can find him, you can only access the relevant content if you have a premium subscription.

Gardner hasn’t held a “town hall” event in two years; prior to his last town hall event, Gardner went more than a year between public meetings. His staff has largely been unable to convince media outlets that he is making a good-faith effort to meet with his own constituents (with one notable exception). It doesn’t help that Gardner has otherwise taken to ignoring local reporters altogether.

It’s been clear for some time now that Gardner isn’t very good at his job. As we wrote in July 2017, the Gardner mystique died before he was halfway through his term. Gardner’s polling numbers would have to improve just to be considered bad, and things are about to get worse.

This sort of political bumbling is still hard to grasp considering Gardner’s once-rapid rise in Republican politics. With such a difficult re-election campaign on the horizon, you’d think Gardner and his campaign would be better than they appear.

On the other hand, you don’t become the most endangered incumbent Republican Senator in the country by accident.