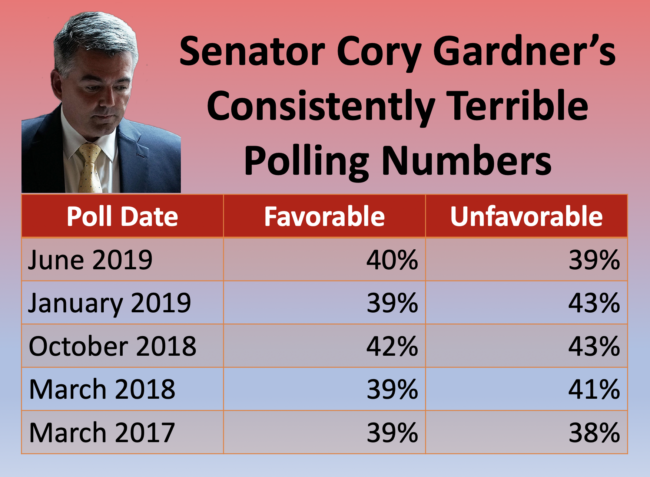 A new poll says more than half of Colorado voters are happy with how things are going under new Gov. Jared Polis but contains the latest sign of danger for U.S. Sen. Cory Gardner as he seeks re-election next year.

Nearly six months into the Democratic governor’s term, 55% of respondents said Colorado was headed in the right direction, versus 37% who said the state was off track, according to a poll released Wednesday. Polis himself was viewed favorably by 50% and unfavorably by 35% — a net favorability rating of 15 percentage points — in the Colorado Poll, conducted by a Democratic consortium that includes Telluride-based polling firm Keating Research.

But Gardner, a Republican who faces a phalanx of potential Democratic rivals, was viewed favorably by 40% and unfavorably by 39% in the poll. That’s similar to how he has fared in the Colorado Poll since President Donald Trump took office.

Gardner’s favorability numbers have been steadily shitty for a long time now, with Colorado voters regularly giving the Yuma Republican low marks in poll after poll. It’s not just the Republican brand in Colorado that is giving Gardner trouble; only 63% of Republicans hold a favorable view of Gardner, compared to 90% for President Trump.

Yes, we have a long time to go until the November 2020 election. Yes, a lot can change. But Gardner should be very concerned about what appears to be a solid ceiling in Colorado.