UPDATE: Kudos to Joe St. George of Fox 31 News, who specifically asked Gardner about why he is not informing the public about his whereabouts. 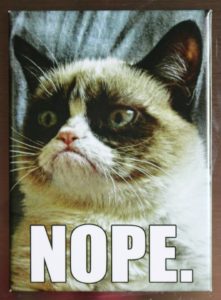 Grumpy Cat is dead, but it can still fact check this claim.

Former Ambassador to the United Nations Nikki Haley was in Colorado on Monday to headline a fundraiser for Sen. Cory Gardner (R-Yuma), who faces a difficult re-election bid in 2020.

Political reporter Shaun Boyd of CBS4 Denver has more on Gardner’s fundraiser, including a nice little mention of a Gardner talking point that has absolutely no basis in reality whatsoever. Boyd has always gone out of her way to be helpful to Gardner, as she does here with a mindless “he said/she said” paragraph at the end of the story:

The Colorado Democratic Party released a statement accusing Gardner of hiding from voters because the event was invitation only. Gardner’s campaign noted he’s held three town halls open to the public in the last couple of weeks. [Pols emphasis]

Gardner hasn’t held a public “town hall” event in more than 600 days, which is damn near two entire years. This is about the easiest fact check you can get, quite frankly, and it’s embarrassing for a local reporter to just repeat the statement without question. It’s like looking out the window to confirm whether or not it’s raining outside. If you doubt us, go ahead and do a quick Google search for public town hall announcements from Gardner. No, really…we’ll wait.

The only recent advance notice of any public event featuring Gardner was in June, when the Morgan County Republican Central Committee hosted Gardner for a “legislative update” at a small venue in Fort Morgan, Colorado. This was most certainly not a “town hall” event, and it clearly was not meant to be advertised to anyone outside of the Fort Morgan area.

Unless your definition of a “public town hall” is an event that nobody knows about and nobody attends, then this line from Gardner’s campaign is complete nonsense and should not have been included in the CBS4 Denver story. Do better, Shaun Boyd.