Recall Donations Have a Funny Way of Disappearing 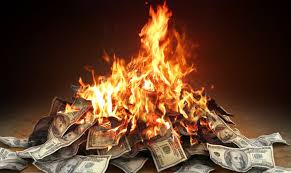 You could donate to a Neville recall campaign…or keep warm for a few minutes.

As we’ve discussed in this space on numerous occasions, various efforts to recall Democratic elected officials in Colorado are about two things: 1) Figuring out a way to get around the fact that pesky Colorado voters won’t support Republican candidates, and 2) Raising money by any means possible.

The fundraising aspect has become so intense, in fact, that it has sparked some nasty infighting among right-wing groups scrapping for loose change. One of the main financial beneficiaries of Recallpalooza is the Neville Clan, led by House Minority Leader Patrick Neville and his political consultant brother, Joe Neville. This isn’t just speculation on our part. The Nevilles openly admit that they are promoting recalls in order to profit financially, which is perhaps somewhat more honorable than pretending otherwise but no less disgusting in general.

As Marianne Goodland reports for the publication formerly known as the Colorado Statesman…well, let’s just say you can color us unsurprised:

A political fund controlled by state House Minority Leader Patrick Neville of Castle Rock and his brother, Joe Neville, has been attempting for months to raise money for the effort to recall Colorado Gov. Jared Polis.

But groups involved in the recall effort say they haven’t seen any of that money yet. [Pols emphasis]

The most recent fundraising email was sent Aug. 5 under the name of Take Back Colorado, asking respondents to reply to a survey on whether the governor should be recalled. It included a link to a donation site, operated by Values First Colorado, the 527 campaign committee run by Joe Neville that primarily supports Republican candidates for the Colorado state House.

Under tax law, 527 committees can raise unlimited funds to influence an election or issue but can’t coordinate with a campaign.

Joe Neville told Colorado Politics that any money received through that Aug. 5 fundraising email would go to the Resist Polis PAC, one of two groups involved in the petition effort to recall the governor. He did not respond to a request on how much money was raised by the Polis-recall emails.

But Resist Polis PAC spokeswoman Korry Lewis said the group’s dealings with the Nevilles have been frustrating, because while “we’ve been talking to them since April” about the fundraising emails, it hasn’t seen any money yet.

As we’ve already seen with failed recall attempts targeting Democratic Rep. Tom Sullivan, you had better hold on to your receipts if you decide to write a check to one of these grifting operations. Some recall donors have in fact figured this out and are asking for their money back, which is sort of like waiting for a check from Bernie Madoff.

This is not the first time that the Nevilles and their friends at Rocky Mountain Gun Owners have made campaign donations disappear. Since Republican donors don’t seem to be learning anything from these mistakes, it surely won’t be the last time, either.