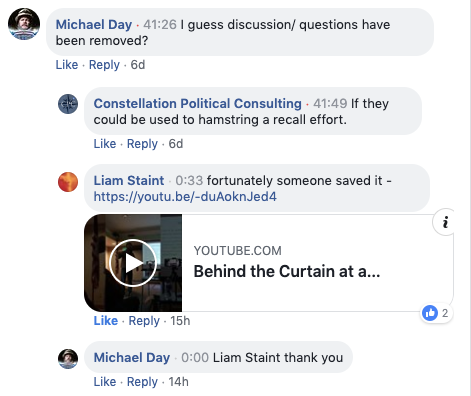 UPDATE: David O. Williams picks up the thread for RealVail.com:

Eagle County is indeed a very blue county these days, with Sheriff James van Beek the only elected member of the GOP currently serving.

Still, that clearly won’t thwart Republican efforts to regain power. But instead of moderating and trying to win over independents, the state GOP, which recently inducted Eagle County Republican Party Chairwoman Kaye Ferry into its hall of fame (despite that record of just one elected party member), is going the recall route…

…Extremism and recalls taking precedence over moderation and reaching out to the state’s growing electorate of registered independents. That’s the modern Colorado GOP approach. How’s that working?

We’ve demonstrated at length in this space about how Republican efforts to recall freshman Rep. Rochelle Galindo (D-Greeley), Gov. Jared Polis, and other Democrats are as much about political grift as they are about legitimate policy gripes. For those who don’t stand to profit financially off of recall election “fundraising,” the real motivation for these recall efforts is about trying to win seats that Republicans can no longer defend in a regularly-scheduled election.

This may seem like a cynical view of Republican politics in Colorado, but it is not merely an opinion. Behind closed doors, Republican operatives are completely open about the real reason for trying to recall Democrats across the state.

The video below was posted to Facebook by someone who attended a recall election training seminar on April 11 in Buena Vista, Colorado. The “recall training” is conducted by Ben Engen of Constellation Political Consulting, a Republican political consulting firm with clients that include the Colorado Republican Party and the GOP-led Senate Majority Fund. This is the full version of a video that was later redacted by Engen over concerns about what might happen if regular folks happened to get a glimpse behind the curtain. The frank discussion that takes place is almost unbelievable.

You can watch the entire 90-minute training session at your leisure, but let’s start by jumping ahead to the 37:30 mark where Engen explains why recall elections are the best chance for Republicans to steal a few seats while most Colorado voters aren’t paying attention:

ENGEN: Recalls are uniquely powerful because they change the dynamic of the electorate. You know, people are generally aware of midterm elections. They’re very aware of Presidential elections – everyone shows up and votes in those. They aren’t as aware, you know, of a special election like a recall that just comes out of nowhere and blindsides them. [Pols emphasis] That was one of the things that really helped us in 2013. We aren’t going to be able to count on all of those advantages again, so we have to be extra cognizant of the timing and executing things in a way that will preserve that power.

Engen references a pie chart on a screen at the front of the room showing the voter makeup in Senate District 11 (Sen. John Morse) during the 2013 recall effort:

So, what you’re looking at here is the difference between the electoral mix in a midterm and in a recall. So this is Senate District 11. In a typical midterm for a Republican, to win Senate District 11, they would have to get 65% of the Unaffiliateds to break their way. I mean, that’s huge. Republicans in the Metro area are never going to be able to do that. [Pols emphasis]

But in the recall, in 2013, a Republican would have only had to get 46.3% of the Unaffiliateds to break their way. That is supremely doable. That’s, like, right on the cusp of what Republicans do in the Metro areas without really trying. So, the fact that people weren’t really as aware of this election – there was a differential in the motivation [that] made a big difference…

This next section is particularly damning:

…So, it’s changing this makeup of the electorate that allows us to be successful in recalls, and for Republicans to carry seats that traditionally would not break our way. Or, in the case of, you know, these seats in 2013, we’ve NEVER been able to hold. So, as you’re moving through this, that’s the thing you want to keep in mind. What you’re really trying to achieve is this re-weighting of the electorate, and there are some more points here about timing to make that happen. [Pols emphasis]

A few minutes later, Engen walks the audience through forming official committees in order to start raising money for their recall efforts. Take a look at how Engen responds to a question about whether these committees can accept donations from businesses:

Yeah, so this just happened up in Weld – that Weld recall that just started. The whole reason they kicked off right now is because they had a business cut a $100,000 check to get them started.

“What you’re really trying to achieve is this re-weighting of the electorate.”

Engen is likely referencing Steve Wells, the businessman/rancher who donated $100,000 to one of the Galindo recall efforts. Engen then explains the importance of creating a website for your recall effort — or, rather, that the only reason to have a website is so that you can collect donations. Engen even recommends a specific platform for fundraising and wonders openly about the cost of other recall fundraising efforts (such as those directed by Jon Caldara of the Independence Institute):

What you want to use is a platform called Anedot to raise your money. It’s just a wee bit more expensive than using something like PayPal, but it’s a lot less expensive than whatever the Polis [recall] guys are using for some reason. [Pols emphasis]

At the 44-minute mark, Engen gets a question about how to differentiate between different recall groups. His response is telling:

ENGEN: You and me both. I don’t know how to help you with that (room erupts in laughter)…

…Try not to get yourself in that trap that they are [caught] up in Weld. Granted, they’re well-funded already, so they’ll probably still be successful, but it’s going to hurt them because people are giving money now to other organizations that aren’t going to do anything with it. You know…who knows, it’s just up in the wind. [Pols emphasis]

We’ve written previously about these red-on-red recall turf battles that Engen is referencing.

At the 45:50 mark, Engen gets a question about involvement from the State Republican Party:

This question has come up a lot, kind of amongst the Republicans, about how involved the Republican Party can be or should be. At the state level, the way that this used to work – the state party would get involved after petitions were accepted. So, like in 2013, that’s when the State Party really got involved. They contributed money and resources to help get that done.

But the reality is, there is an infinite number of candidates that can be recalled, and the Republican Party doesn’t have the resources to be going around handing out money to recall every single person under the sun. [Pols emphasis]  And it’s too tough to call which ones are going to take off and which ones aren’t, so generally the state and in most cases the county parties just avoid that whole thing. Even if they aren’t formally engaged in it, there’s a couple of things they can do to help you. Like, they’ll have access to the voter file and they can give you access to that. The state party does have a “walk app” that they can probably let you use.

As Engen next tells the audience, they are more likely to get help from the State GOP in Senate District 5, which is represented by Democratic Sen. Kerry Donovan:

Now, if your petitions are successful and you do initiate a recall, the state party will almost always find money to support you – and especially if it’s against Kerry Donovan.

Engen goes on to emphasize the importance of finding an actual Republican candidate to run against a lawmaker targeted for recall, at which point another audience member says this:

UNIDENTIFIED MAN: Our biggest challenge will be Eagle County. That’s our biggest problem with Kerry Donovan, because Eagle County is a really blue county, and that’s where the majority of the population is. So, if that county just decides to vote for her in the recall, then she might stay on.

It is indeed quite a challenge to initiate this here recall when you consider that voters in SD-5 actually want Donovan as their State Senator. Donovan was just re-elected to another 4-year term in November 2018 BY A 20-POINT MARGIN.

Before we get to the Q&A section at the end of the discussion, Engen returns to emphasize that the key to winning a recall election is basically to fool the majority of registered voters in a given area:

This is the most important consideration: Do not go out half-cocked. The reason we succeeded in 2013 is because those elections could not be conducted as mail [ballot] elections. So we can’t bank on that this go-round. But we can choose when the election happens. [Pols emphasis]

So you need to think this through and count backwards in time. Once you turn in your petitions, you have 60 days. Once you turn them in for validation, they have 15 days to approve them. After that, the Governor has 30 to 60 days to set the election. So you need to think about that: When is the worst time possible for Kerry Donovan to be dealing with this? Do you want to wait and start this in September so that the [legislative] session is back in and its harder for her to defend maybe? Do you want to try to do this during the holidays, when people are distracted and only your supporters are going to turn in their petitions. Like, start in August and the thing will have to happen in December.

Think this through. Don’t run out of the room here and go pull petitions. Give this some thought to when you want the election to happen, because this (timing) is what ultimately determines your success. You can go out and get your petitions validated and approved, initiate the recall, and then get crushed so easily if you don’t have a favorable electoral mix. So, this is the thing, more than anything, that will determine your success – is choosing when you want to have the election and have it happen on your terms. [Pols emphasis]

Colorado voters keep electing Democrats in election after election, so Republicans are focusing their efforts on recall campaigns as a way to get around this pesky problem of Democracy. This isn’t our take on the situation — this is what Republicans are saying to each other. You can see it for yourself.

Click below for more references regarding the recall training and Constellation Political Consulting. 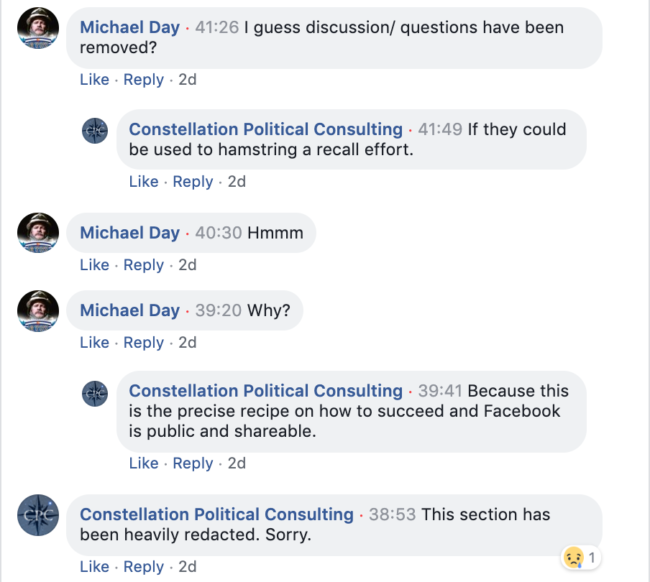 Facebook discussion in mid-April in which Constellation Political Consulting explains the reason for redacting some of the information in the training video. 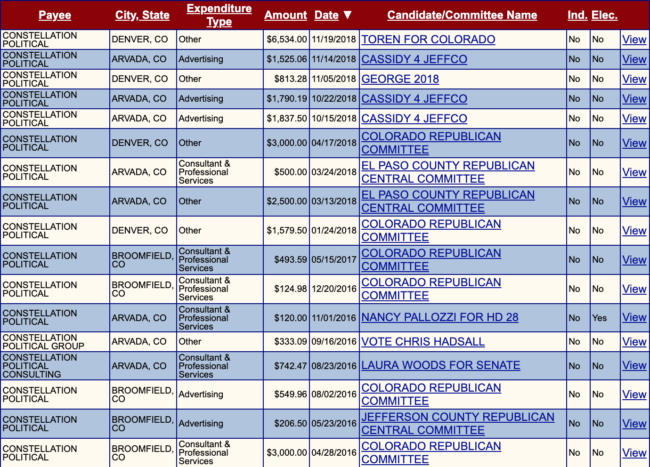 More on Constellation Political Consulting’s clients, via the Colorado Secretary of State’s website.