We wrote last Thursday about the co-opting of the longshot and nasty campaign to recall Gov. Jared Polis, which would require an unprecedented 600,000+ signatures in order to even qualify for the ballot necessitating a multimillion-dollar petition campaign on a scale never before seen in Colorado, by the Independence Institute–the decades-old local “nonpartisan nonprofit” run by right-wing prankster Jon Caldara. Caldara’s operation is taking over fundraising in particular for the Recall Polis campaign, via an online platform that automatically skims 6% plus a per-transaction fee from every donation. That’s more than double what GoFundMe, the processor the campaign was previously using, charges for the same donations.

Well folks, you can add the campaign to recall Rep. Rochelle Galindo to Caldara’s revenue stream: 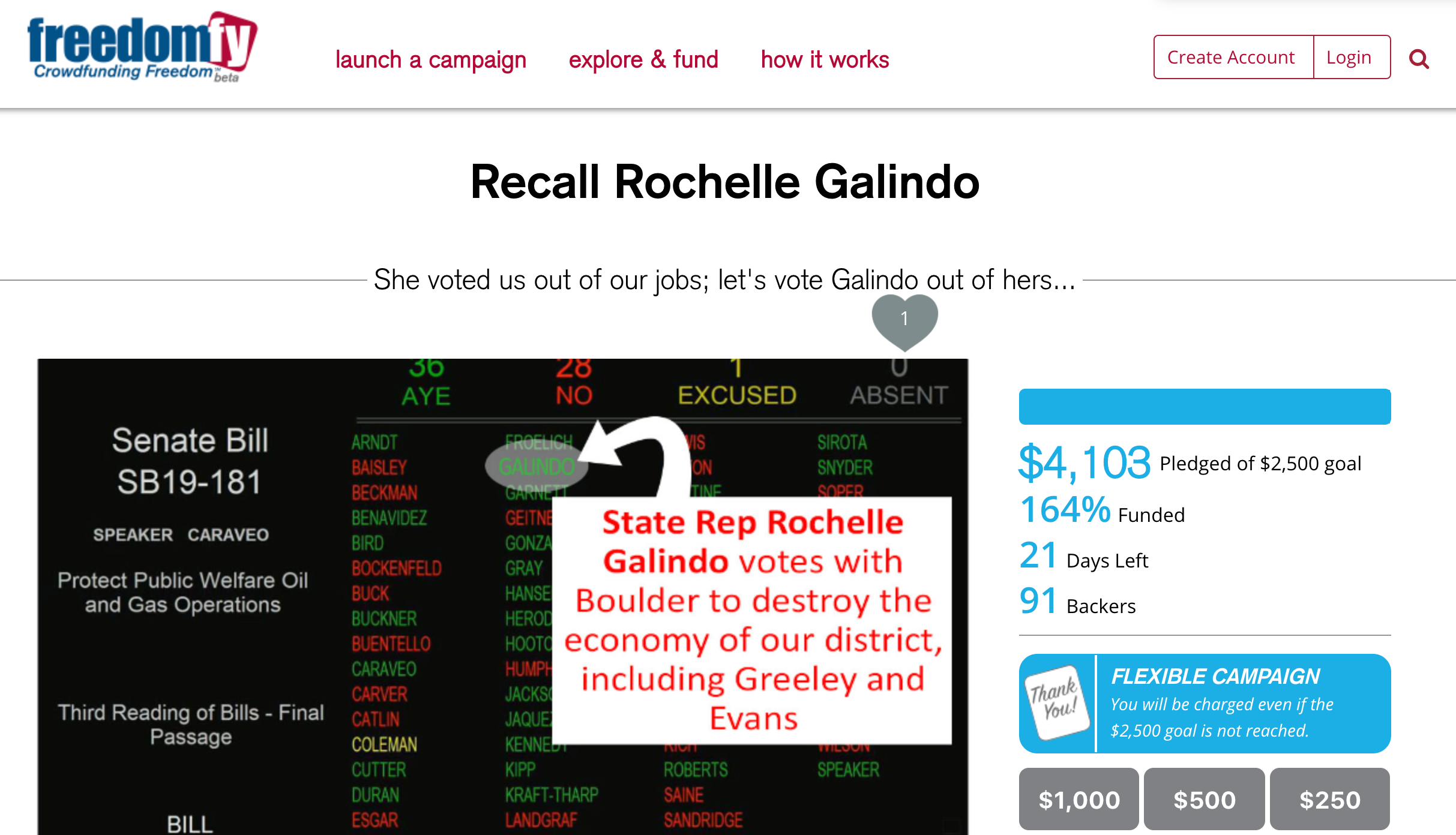 As you can see they’re raised over $4,000 toward the Galindo recall, of which Team Caldara pocketed $246 at their stated 6% skim–plus a 30 cent per-transaction fee. Over at the Recall Polis page, the $16,290 they’ve raised translates to a cool $977 off the top to the Independence Institute. As you can see above, the “goal” of $2,500 for the Galindo recall has been met–which on fundraising sites like GoFundMe would mean the funds will be released for their intended purpose.

But it doesn’t matter, rubes!

You see, the Recall Polis campaign is a “flexible” Freedomfy campaign, meaning they’re going to take your money whether or not they reach their fundraising goal. The FAQ page for the campaign explains that “funds are setup to deposit to the Issue Committee bank account every few days and will be used as they come in for advertising and materials to run the operation.” That means the campaign’s “goal” is irrelevant, and the money flows directly to the campaign less Caldara’s 6% cut no matter what happens. A fair amount of those funds can be expected to eaten up by invoices from former Secretary of State Scott Gessler, who signed on as the lawyer for the campaign at the same time Caldara took over the money side.

Especially with the Polis recall, the enormous logistics that would be required to successfully collect the required signatures in the short 60 days allowed make success of the effort extremely unlikely–which in turn raises ethical questions about the revenue positive “help” the campaign is now getting from local right-wing usual suspects. For the Galindo recall the threshold is lower, of course, but using Caldara’s pricey platform for their fundraising siphons off valuable resources on a continuous basis from the campaign.

Above all, what grassroots conservatives need to be asking is why, in response to their grassroots anger, all the “experienced” political operatives want to talk about is monetization of the recall campaigns. This is an especially urgent question given the novel way Caldara stands to reap a much higher percentage than the market rate off funds raised in support of both of these campaigns.

Short of that, we have to assume that these people are okay with being ripped off.