UPDATE: Does this look like a guy who is content to just run for re-election as Sheriff?

This week Weld County Sheriff @stevereams and our Exec Director, @dudleywbrown, met with @RandPaul in the Swamp in order to stop the Federal “Red Flag” Gun Confiscation bill. Senator Paul is with us — are you?
#coleg #copolitics #redflagrecall pic.twitter.com/neZRZkJ0x7 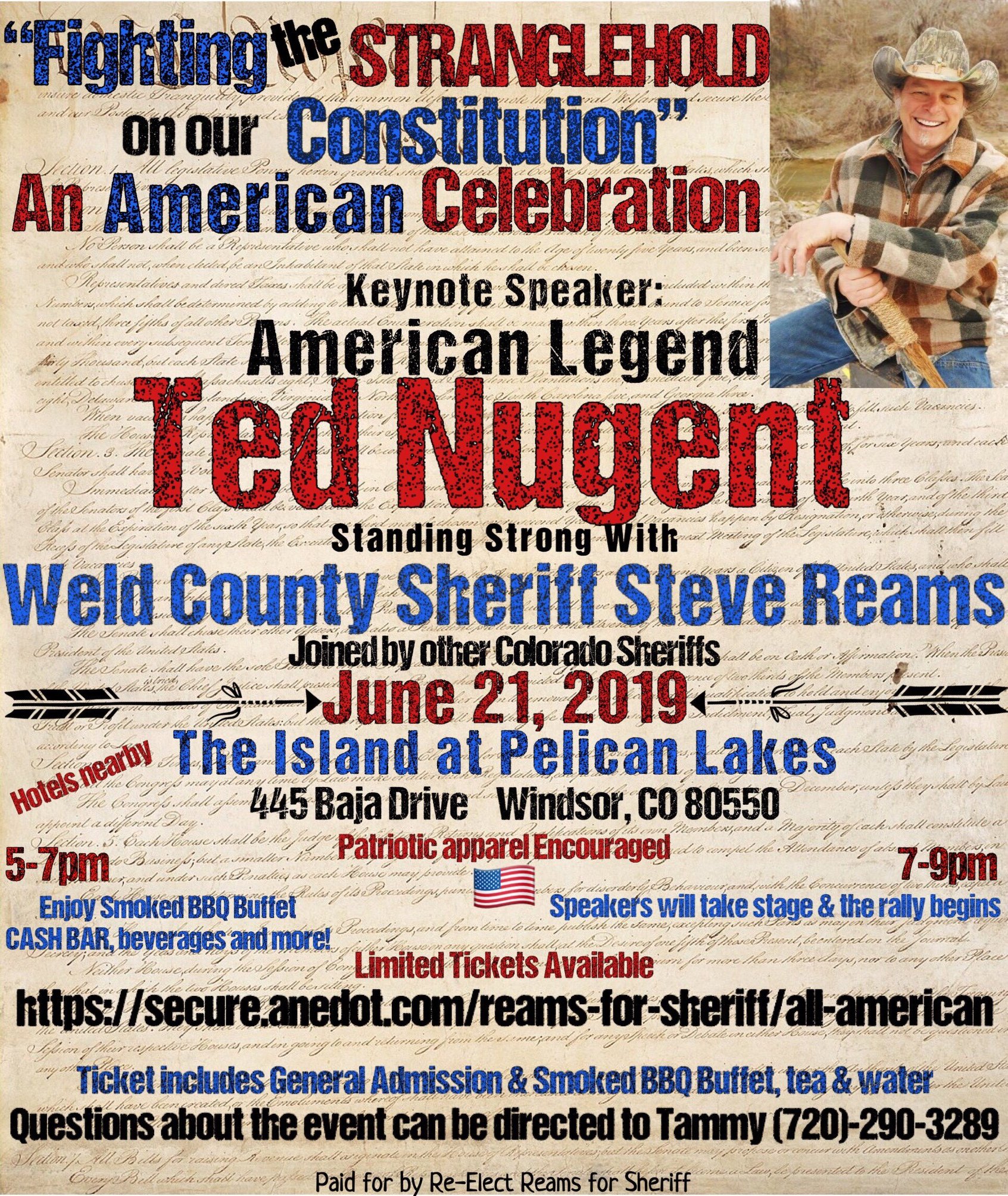 Conservative activists in the would be sovereign state of Weld County are over the moon today after it was announced that “American Legend” Ted Nugent will headline a $150 a plate fundraiser for Weld County Sheriff Steve Reams next month (see invite above). As our readers are well aware, Nugent has made himself a recurring guest star on the far right side of Colorado politics ever since anti-immigrant firebrand Tom Tancredo started running for President and then governor in the mid-to-late aughts. Since Colorado became a battleground state over gun safety laws in 2013, Nugent has bitterly criticized our state as “a poster child for apathy, disconnect, laziness, and abandonment of We the People.”

Of course, Nugent hasn’t always proven to be helpful to the politicians he has endorsed, as in Tancredo in 2014 and then George Brauchler’s abortive run for governor for the 2018 cycle. Part of that may be due to Nugent’s record of calling President Barack Obama a “subhuman mongrel” who can “suck my machine gun,” his unapologetic and continuing utilization of the “N-word,” saying women who don’t like guns deserve to be raped, and of course recording hit songs in celebration of statutory rape. If you add all that up and wonder how the hell any politician–particularly a politician in law enforcement–would allow themselves to be associated with The Nuge, you’re not alone.

Setting that aside for a moment, it’s undeniable that Sheriff Reams’ political star has risen among Republicans since he became the poster child of defiance to the state’s new extreme risk protection order (ERPO) law, vowing to go to jail rather than enforce the law despite overwhelming public support. Given renewed speculation about Ken Buck’s future and even the possibility of an upstart primary challenge to a politically weakened Sen. Cory Gardner, we wouldn’t be too confident that mere re-election as Weld County Sheriff is the limit of Reams’ ambition.

In the meantime, hopefully Sheriff Reams will keep his buddy away from the local Jailbait.